Enthusiastic crowd at the 2014 US Tennis Open, Court 11, September 7

I have been a huge tennis fan since the 1970s and 1980s when Chris Everett, Jimmy Connor, Johnny Mac and Andre Agassi hit the global stage and brought the game of tennis into the middle class and inspired generations of Americans to pick up the racquet. Since then I have followed the game, played and gone to the US  Tennis Open most years in August. How much I “fiene” for the sport? When you mention “US Open,” I NEVER THINK OF GOLF. There is only one US Open for me and that is tennis. Despite my great love for this international and inter-age sport, I never was really aware of the complete dynamics of the game until I saw wheelchair tennis played and began to speak with some of the athletes who dominate wheelchair tennis.

Me with Andy Lapthorne (UK) the winner of the Men’s Wheelchair Quad Singles 7-5, 6-2 against David Wagner (US) 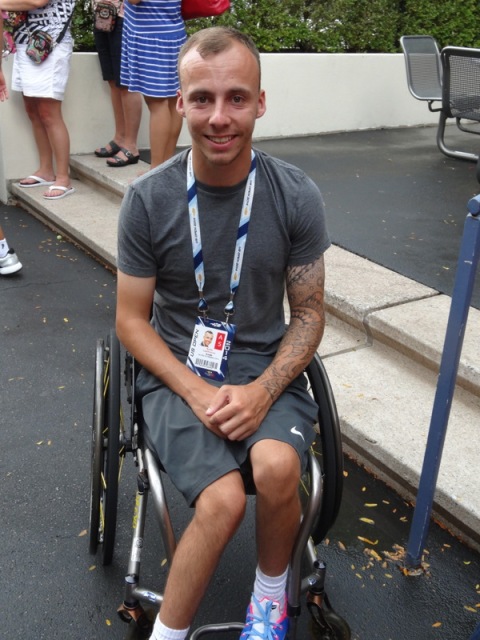 Andy Lapthorne 2014 Winner of the Men’s Wheelchair Quad Singles. THIS AMAZING PHOTO WAS TAKEN THE DAY BEFORE ANDY WON. A bit prescient, don’t you think? 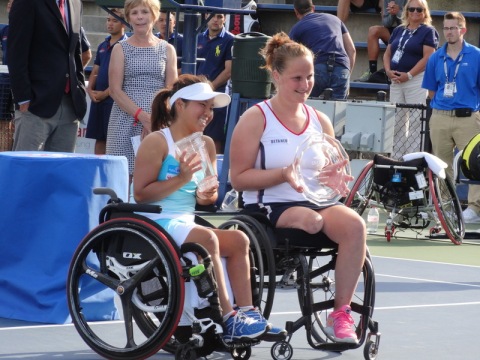 I can’t speak highly enough about these incredible athletes who in many ways require more endurance, sang froid and all around good humor than the occasional Club tournament player like me or even the mobile professional players on the tour. How does one view the wheelchair tennis players if one is a trained athlete or a player with full mobility? According to Dan James, National Manager of Wheelchair Tennis, YOU LOOK AT THE PLAYERS AS “INCREDIBLE ATHLETES AND LOOK BEYOND THE WHEELCHAIR.” I would add that the wheelchair is actually one more “tool that has to be mastered,” along with a well placed serve, great backhand and forehand, superb eye-hand coordination and ball anticipation and all around games-person-ship that ARE REQUIRED for this world class sport which Wheelchair Tennis has become. 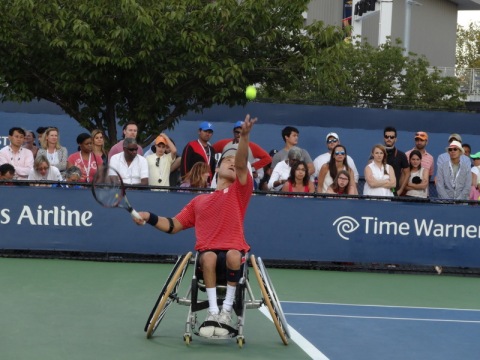 S. Kuneida from Japan with a dynamite serve. 2014 Men’s Singles Wheelchair Tennis Finals. Click for the results of the win.

The 2014 US Open Wheelchair Championships occur during the last four days of the US Open Tennis Tournament. This year I was able to see most of the Semis and the Finals matches. One of my pet peeves about the tournament is that some of it is held during the 2014 Men’s Semi Finals and Women’s Finals Matches. Having a seat at Ashe and running back and forth to see the progress of the matches can spin one’s head like Linda Blair in the Exorcist. However it is doable. I am praying that one day…these events do not run simultaneously but are either before in Ashe or are in the new stadiums where the old Louis Armstrong and Grandstand will have been. Here are some more of the pictures and some of the players. Their matches were fun, amazing and enjoyable. And they were challenging for the players and exciting for the spectators. You need to be there to understand. 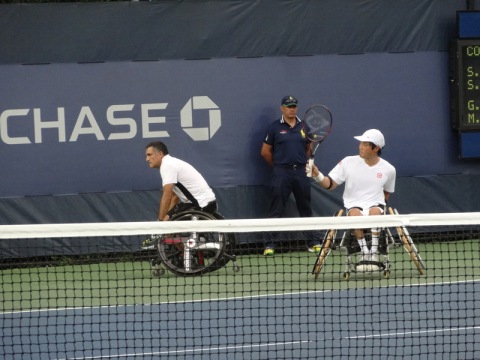 G. Reid and M. Scheffers in a tight match vs. Houdet and Kunieda. Men’s Wheelchair Doubles Finals. Click for results of the win.