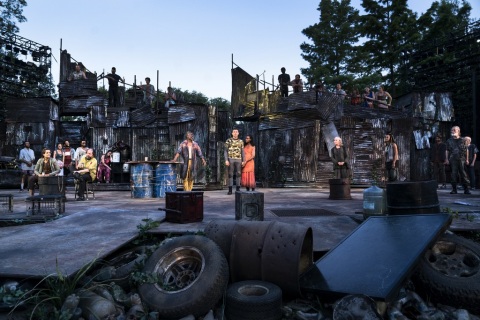 Coriolanus, Shakespeare’s apotheosis about a war monger who fires up for battle and yawns with boredom when he must live peaceably in the community brings to mind a ravaged soldier whose PTSD has so overcome him that he prefers living on the edge of death to energize himself to life. If he must choose between bloodshed, battle and calm, give Coriolanus carnage that he delivers, the gorier the better.

What does one do with such a Roman in a time of scarce resources on a planet ravaged by the doomsday scenario of global warming? Make him a politician to organize and straighten out issues in a time of great unrest in the most dire of conditions? Indeed, then watch him self destruct. For politicians must schmooze, flatter, promise, swallow crow, apologize and act with humanity and forbearance. Coriolanus is fit for battle, not for compromise, leader of his own personal autocracy which cannot be countermanded. Politics requires equanimity or the appearance of it. Of this he is incapable.

Shakespeare’s protagonist has a bit of the hero of The Hurt Locker (Kathryn Bigelow’s 2008 award winning film) without Jeremy Renner’s heartfelt agony and recognition of the mammoth loss of his former self before he signed up for war. Indeed, Coriolanus as portrayed by Jonathan Cake has much of the robotic machine killer with whom one has a devil of a time empathizing, especially as he rants and raves against those not born to a privileged background, from no fault of their own. Cake’s Coriolanus lacks interest, love or concern for others, except his wife (Nneka Okafor) son (Emeka Guindo) and mother (the wonderful Kate Burton). For his patrician friends he shows equal measure and latitude, for example Menenius Agrippa (Teagle F. Bougere) Cominius (Tom Nelis) and Titus Lartius (Chris Ghaffari) who advise him and fight with him. For his marvelously bellicose foes like Tullus Aufidius (Louis Canelmi) he bestows his complete veneration and worship. 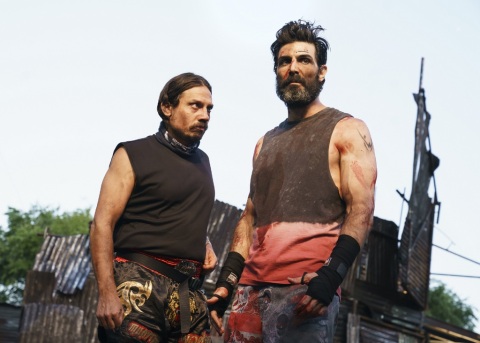 As for the hurting, starving crowds clamoring for grain while the patricians’ storehouses flow with plenty? Let them eat each other in a zombie apocalypse. Coriolanus will none of it. Indeed, at the outset of the production, director Daniel Sullivan has placed a locked up barrel holding water downstage which the plebeians attempt to break into.  But only Coriolanus holds the key to the lock and only he has access as he gives water to his son and denies his thirsty underlings. Charity stops first and last with self and family in a time of crisis such as that which confronts this deteriorating Rome, evocatively represented with a Mad Max scenic design by Beowulf Boritt of scattershot, burned out piles of garbage, remnants of the past, rather like Bob Ewell’s (To Kill a Mockingbird) scrummy playland hovel next to a massive town dump.

Because the rabble are deprived, there is civil unrest against the elites which if not quelled will threaten the security of the state, making it vulnerable to Rome’s enemies. However, Coriolanus answers the plebeians’ complaints with epithet and insult (they are curs and scabs) and argues that if he had the opportunity, he would slaughter them and create a mountain with their carcasses. 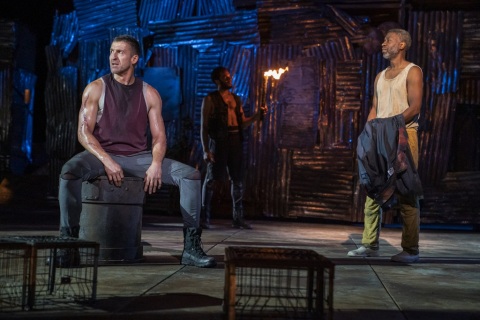 Some explanation is given for his wrath against the fickle, unreliable lower classes. His is an elitist patrician nature roiled by his aggressive, assertive mother. When he was a child she encouraged him to abusive dominance exemplified when he attacked the most beautiful and delicate of nature’s creatures by chomping off the wings of butterflies. Being so schooled against softness and generosity, he  has no tolerance for the lazy, cowardly plebeians whose unmeritorious behaviors deserve no handouts. He states this to their faces in the opening scenes and we divine that his rancor is most grievous when he rails that he has provided the security of Rome while these poor and unfit do nothing to help him, but quailing in fear, flee even the thought of battle.

The situation is certainly egregious with the Volsces who come to attack. To get the corn they need to stem Rome’s hunger and murmurings, Coriolanus like a Titan hero single-handedly in “Incredible Hulk” fashion goes against these foes and delivers the goods without the help of the commons who slow him down. He emerges victorious from Beowulf Boritt’s ramshackle tin gates set, bloody and triumphant, but arrogant to the point of caricature! 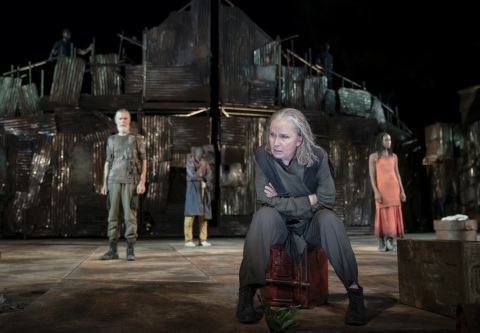 Was ever there such a raging hero hewn from the trials of confronting daily doom as the populace struggles against diminishing resources in Sullivan’s fascinating, ominously foreboding vision? Never. And Shakespeare forges from his hyperbolic character the tragic flaw that caves in Coriolanus’ life, legacy and career: his overweening pride, and his fearsomeness in not being shy to express his superiority to those lowlife “deplorables” who hate him.

Coriolanus certainly is reminiscent of other leaders we know whose arrogance and inability to apologize runs before them. However, Coriolanus is intrepid, mighty and uber skilled in battle. In this he is admirable. The current arrogant and boastful who lead are 100% image and 0% substance, bullying, cowardly and shallow like those whom they represent. That both Coriolanus and the resident of the White House are unfit for politics is their only similarity. Coriolanus’ pride is based in fact and follows an important logic that is downright Puritan in a time of destitution. If one doesn’t contribute to the good of the society, then one is not worthy of the grain that others have supplied. Freeloaders are not welcome! 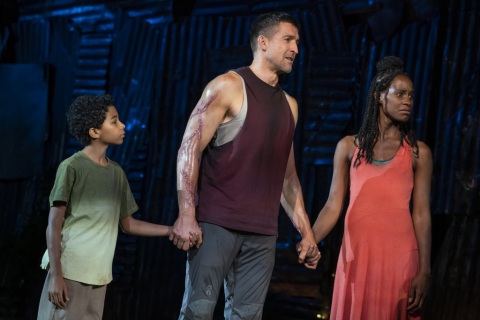 Shakespeare’s tragedy revolves around his protagonist being lured into the political sphere which he hates for he is not social. He is too “in your face” real to grovel in flowery phrases, alluring promises and imaginative disingenuousness to please the masses. He is direct, frank and authentic and cannot apologize or “fake it” to front those he despises.

However, he suppresses his best judgment and accepts a position which is offered to him. The conspiracy against him blows up when the Tribunes who despise him Sicinius (the excellent Jonathan Hadary) and Junius Brutus (the equal of the pair Enid Graham) incite the plebeians to revoke the offer of the position. This is upon condition that Coriolanus does not “bow” to the voice of the people. This untenable situation requires Coriolanus to be humble and compromising; this is an impossibility which results in his banishment by the Tribunes. Coriolanus counters with the statement that he banishes Rome from his presence and stature. With solemnity, he suggests that there is a place for him, away from Rome. 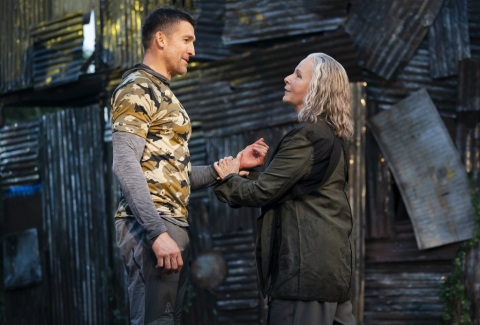 But there is not. Though he joins Rome’s former enemy Tullus Aufidius of the Volsces intending to avenge his disgrace and dishonor of banishment by destroying Rome, it is a rush to judgment. The momentous decision means that he will destroy his mother, wife, son and friends who have not joined the Volsces. In the most insightful and powerful scene in the production (thanks to Kate Burton and Jonathan Cake’s whining “but mother” which reveals his enslavement to her dominance) Voluminia persuades him to betray Aufidius and fight for Rome not Volsces. It is Coriolanus’ act of sacrificial, stoic death. Aufidius will certainly kill him for his betrayal. That Voluminia has raised her son to war so that he can ultimately die to save her is unnatural and wicked for a mother. Doesn’t Voluminia and his family have other options? But their relationship as Cake and Burton portray it is fraught with issues of power dominance and abuse as the brute Coriolanus is reduced to a mewling weakling by his mother. He accedes to her wishes.

The production’s emphasis works at times and at other times is spotty. The rag-tag Costume Design by Kaye Voyce, Scenic Design by Beowulf Boritt,  the Lighting Design by Japhy Weideman (strongest at the conclusion) the Soudd Design by Jessica Paz, the Composer Dan Moses Schreier’s music all convey Sullivan’s vision and themes soundly to resonate for us today. What happens to the haves and have nots when the law of diminishing returns lets loose annihilation because of the willful negligence and stupifying greed of previous generations’ corporate elites? Sullivan’s answering backdrop for the play is acute and frightening.

On the other hand, the empathy that we could feel for the plight of Coriolanus struggling against his own character wobbles perhaps because his character portrayal is one-note, at times cartoonish and lacking in depth. In the scenes with Burton’s Voluminia the depth of Cake’s Coriolanus shines, however. Shakespeare’s characterization reveals a character caught by his own ego between a rock and a hard place. He is betrayed by the Tribunes (his mother’s rant in their faces is largely ineffective) who capitalize on his arrogant weak character, lure him then back him into a humble pie corner from which he implodes.

And when he decides to punish Rome by depriving the society of the one way he has greatly benefited it by delivering death to its door? Once again he is thwarted, this time by his mother. And yet, there is no solace, nor sorrow nor identification at the conclusion that one might feel with Cake’s portrayal of a man who has undone himself. This is a weakness of the production which in all else especially Sullivan’s vision of the future is pointed.

Coriolanus is enjoying its last presentation today, 11 August. Performances have been sold out. However, there may be  seats released if you are lucky and able to get to the Delacorte Theater well before curtain time at 8:00 pm.