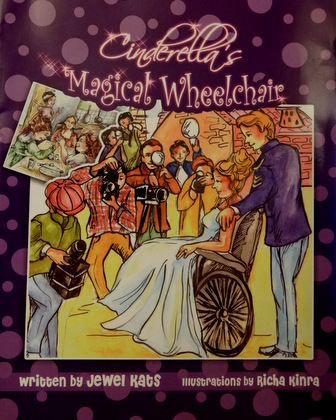 In a land far, far away there was magic and there was brutal reality. If that sounds like a bit of a fairy tale, so it is. But when you think about the long haul of eternity, life is a bit of a fairy-tale in its beauty and pain. There are magical times and then there is the brutal reality of sorrow and loss,  But with faith and effort, there is overcoming. Such are the themes of the modern fairy-tale Cinderella’s Magical Wheelchair told by Jewel Kats (illustrations by Richa Kinra) with the caveat that we can have a wonderful things, but there might be some things we will never have.

Most of us are familiar with the iconic Disney animated film with Cinderella’s fairy godmother, the pumpkin coach and the mice attendants who outfit our heroine for the ball. If you visited NYC, you might have taken your daughters to Rodgers and Hammerstein’s Cinderella on Broadway. There are film versions  and adaptations, for example Ever After: A Cinderella Story starring Drew Barrymore and Kenneth Branagh has directed a live action Cinderella which is slated to come out in March 2015.

The Cinderella story is mythic, digging into the heart of every girl’s and every woman’s unconscious needs. The handsome, wealthy prince takes kind, sweet Cinderella away from the horror of her wretched, abusive Stepmother and wicked, ugly, demeaning Stepsisters. For the rest of her life as Mrs. Prince, Cinderella “lives happily ever after,” while the Prince with his inherited family wealth supports her in comfort and style, wiping out all the sad memories of her hurtful treatment by the “Steps.” The irony is a man, Charles Perralt, wrote the story in 1697, not a woman. Indeed, the story supports a paternalistic, oppressive culture which inspires women to endure the drudgery of life with the hope that “one day, their prince will come” and if she is proposed to, her man is her prince and “king of his castle.”  Such is the stuff that inspires Golddiggers and naive brides alike. Unfortunately, the reality of marriage and “happily ever after” is very different.

That is why I like Jewel Kats’ retelling of Cinderella. In Cinderella’s Magical Wheelchair. Kats’ Cinderella is disabled. However, her spirit and attitude are not broken. When the fairy godmother comes to transport her to the ball, she doesn’t touch her wand to Cinderella’s feet or legs creating mobility. Some things do not change; at 12:00 AM, all returns to what it was before. But something magical does happen to Cinderella’s wheelchair. At the ball, the prince is intrigued by this woman and forgets about her disability. What he understands about her touches his heart.

At 12:00 AM they part and reality sets in once more, but the ball has opened Cinderella’s eyes. She leaves the miserable life she led with her Steps, packs up and sets out on her own. This is a self-reliant woman who knows how to take her skills and use them to live and support herself. She is not “waiting for her prince to come.” She will make it on her own.

What happened at the ball? Does she eventually meet up with the prince again? Well, you’ll have to find out for yourself. I’m not telling. I do think that Kats’ version is the most modern and prescient of all. What I love about it is that to a great extent, it explodes the dangerous myth that there is “happily ever after” in marriage. Not that there isn’t, but that you have to work at it and some things, some realities, you cannot change. You must adjust to them.

This is a very important message to bring to young girls. Life can hold magic and pain, and the most disabled are those who are wicked, jealous and cruel.

Some fairy tales are not told by paternalists, but are retold by resilient, smart women.

A very special thank you to Chris Miller who introduced me to the work of Jewel Kats.

The timeless story of “Cinderella” dates back to 1697 when first created by Charles Perrault,