Fisher Stevens, ‘Before the Flood’: Video of the Q and A at Hamptons International Film Festival 2016 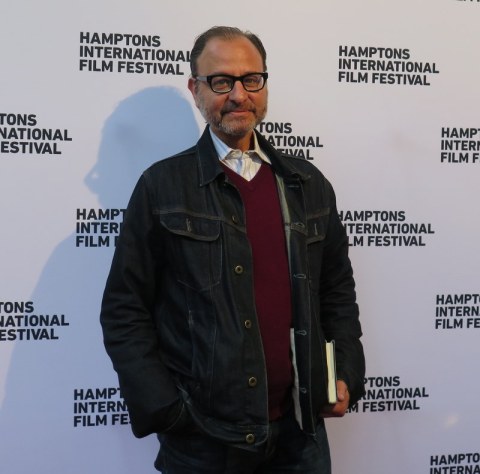 Fisher Stevens at the HIFF 2016 speaking to me about his documentary ‘Before The Flood’ (photo Carole Di Tosti) See the video clip on Theater Pizzazz by clicking HERE.

Fisher Stevens’ Before the Flood is a prodigious effort by the filmmaker who is also an actor, writer and producer. The film, starring Leonardo DiCaprio (he also co-produced the film), which screened at the Hamptons International Film Festival 2016, comprehensively details the subject of climate change through cogent interviews by scientists, activists, researchers, world leaders and more. Stevens’ perspective could have been a browbeating doom and gloom treatise on global warming. Instead, after seeing the film, one leaves the theater feeling the urgency that there are ways one can individually make a difference in the fate of the planet.

Stevens’s documentary is compelling and memorable as he traces how climate change impacts every being on this planet, every microscopic creature and every seed, every spore, every molecule of life that has managed to evolve and survive through the eons up to this point in time.  He shows how experts in climatology and related, supporting fields have been monitoring the planet for years and have produced the facts, details, information, data, maps, visuals, photographs that predict signs of impending global catastrophe. In an overwhelming consensus, they have explained what is ongoing and current: rising seas, melting glaciers, disappearance of the Greenland ice sheet. They have almost uniformly predicted the subsequent inundation of coastline cities, mass population migrations, starvation and decimation of a planet caused by greenhouse gas overload which created chain reactions that many believe are irrevocable.

Stevens also reveals the antithetical arguments to climate change and why they exist. Despite scientific consensus, climate change deniers managed, with Fox news propaganda prestidigitation, for expedience and profit, to turn black into white, to twist up into down and to morph fact into fiction. The result has been a quicker burn, a delayed global response which even after the Paris Climate Summit 2015 is not effectively doing enough to stem the glacial melt, dissipate the acidification of the oceans, ameliorate the dying of coral reefs, end unsustainable practices employed by energy corporations and create an effective reduction of carbon emissions to cool the planet.The scenario scientists, researchers and experts paint has far reaching dire consequences that impact every global culture and every land or oceanic ecosystem with supporting marine and wildlife. This result may be likened to the ushering in of the four horseman of the apocalypse: pestilence, war, famine, death.

But this must-see documentary is uplifting despite the revelatory evidence of overarching power demonstrated by a handful of genocidal nihilists (climate change deniers), who are egregiously and willfully deaf, dumb and blind to the earth’s reality show. How Stevens’ journey (which follows the investigation and work of Leonardo DiCaprio as United Nations Messenger of Peace on climate change), arrives at the realm of hope that suggests a possible rainbow in our future, is miraculous, invaluable filmography.

The film must be seen for its poetic script, its breathtaking cinematography and concurrent dark and soaring music, its cogent analysis and exhaustive documentation through experts’ interviews, visuals, maps, data and much more. Fisher’s documentary is an accessible and definitive work on climate change. It will inspire all those who see it to become involved on a personal and community level to overturn the climate change denier’s lies and take action before it is too late. The film Before the Flood is being aired on National Geographic and is screening at City Cinemas Village East and elsewhere. Check about dates online.

Here, Fisher Stevens speaks to the moderator at the Hamptons International Film Festival 2016 after the screening of this seminal film.