NYC Theater: ‘On a Clear Day You Can See Forever’ Starring Melissa Errico at The Irish Rep 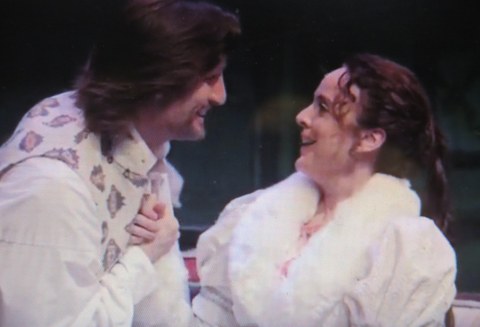 John Cudia, Melissa Errico in the Irish Repertory Theatre’s ‘On a Clear Day You Can See Forever,’ directed by Charlotte Moore (Carol Rosegg)

I did not see the Broadway versions (1965, 2011) of the musical On a Clear Day You Can See Forever by Burton Lane (music) and Alan Jay Lerner (book and lyrics). Paramount Studio made a film of the musical starring Barbra Streisand and Yves Montand, which has been listed by the American Film Institute as one of the 100 greatest musical films ever. Unfamiliar with the theater versions and the film, I did have a passing recognition of the more tuneful, memorable songs.

Thus, I came to Charlotte Moore’s adaptation of the show, currently running at the Irish Repertory Theatre, with a fresh perspective. The musical for years has been incorrectly (to my mind) characterized as “odd,” but I could not disagree more. I appreciated the Irish Rep’s revival and the lyrical, lovely music conducted by Gary Adler, engendered by music director John Bell and orchestrated by Josh Clayton. And I loved Moore’s canny direction and the accomplished, thrilling lead performances of Melissa Errico and Stephen Bogardus. Furthermore, the fine ensemble, also headed up by John Cudia as Edward Moncrief, strongly undergirded the dynamism of the revival/adaptation. Indeed, this production soars as a delightful theatrical experience full of whimsy, joy, and charm. 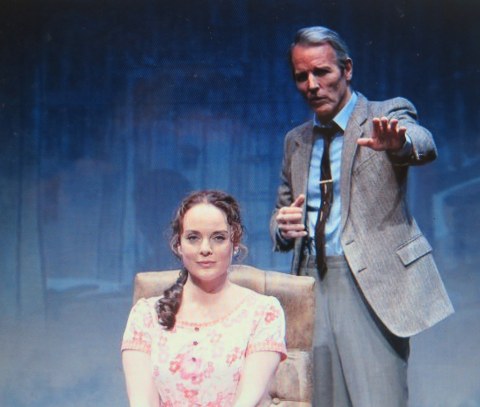 Melissa Errico, Stephen Bogardus in the Irish Repertory Theatre’s ‘On a Clear Day You Can See Forever’ (Carol Rosegg)

If one finds it difficult to accept the possibility of other realms of consciousness and making contact with past lives, the plot may appear inconsistently fantastic. Might we recall past identities, floating in our conscious or unconscious minds and impacting us in the present? Dr. Mark Bruckner (the gorgeously resonant-voiced Bogardus) through hypnosis regresses Daisy Gamble (played with energetic grace and verve by Errico). This premise, that we can recall past lives through hypnosis – an idea especially popular in the 1960s – grounds the play’s structure.

The regression occurs with Daisy’s permission after Dr. Bruckner discovers her amazing psychic gifts of precognition and telepathy. Threaded into her personality is a healthy dose of prescience. She predicts when the phone will ring. She communicates psychically and receives others’ thoughts. Of course, who communicates with her telepathically makes a difference, and why she receives their thoughts and not those of others conveys one of the play’s themes.

To say Daisy manifests the flexibility to suspend the culture’s rational materialism remains an understatement. And Errico handles Daisy’s gifts with authenticity and humor. For example, when she sings “Hurry It’s Lovely Up Here” to illustrate to Dr. Bruckner that her plants blossom speedily with her love talk, her luscious singing provokes our belief in Daisy’s extrasensory powers. With Errico’s magical, musical show-woman-ship, such feats of telepathy, etc., become humorous and matter-of-fact realistic.

It’s when Daisy and friends attend a group hypnosis session to stop smoking that the doctor notes her unusual susceptibility to hypnosis. Intrigued, he regresses her. With few props, clever costumes, and elusive painted projections, Moore and her artistic team stage 1960s New York City and 18th-century England adroitly. Somehow, the team’s artistry effects Daisy’s/Melinda’s environments and consciousness with appropriate, minimalistic fanfare. After all, this is a play about the mind, the intellect, and one’s ability to receive glimpses of the forever in the here and now. The small stage and pared-down sets and casting at The Irish Rep seem appropriately intimate for the overarching themes about the mysteries of life’s incorporeal beauty and spiritual grace in all living creation.

John Cudia, Melissa Errico in the Irish Repertory Theatre’s ‘On a Clear Day You Can See Forever’ (Carol Rosegg)

Under regression, Daisy transforms into elegant, well-healed Melinda Welles, replete with British accent and cool impassioned femininity. When her lover becomes her philandering husband Edward Moncrief (Cudia’s rich operatic voice melds beautifully with Errico’s in “She Wasn’t You”), and pursues many dalliances, unlike women of her time she revolts. To escape her misery and begin a new life, she books a passage to America. But her physical body never makes it. Perhaps her spiritual desire manifests through someone else? Regardless, Melinda, in Daisy’s unconscious, has arrived in Brooklyn and shows up when the time to manifest becomes appropriate. This notion teases with ironic humor.

Dr. Bruckner falls for the exotic, elusive Melinda (Bogardus impeccably renders the lovely song “Melinda”).  We understand his amazement at this other woman who appears when Daisy falls into unconsciousness under hypnosis. Melinda represents Daisy in a mysterious connection to the present which has yet to be revealed at this point. 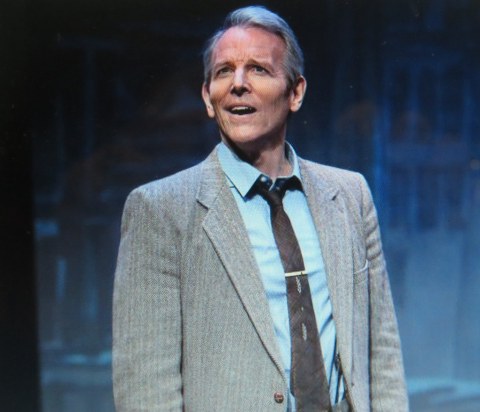 Errico exquisitely portrays the dual opposites, Daisy and Melinda, as head and tail of the same coin. She slips from cool Brit to zany New Yorker smoothly, but the transformation remains a cipher. Daisy’s bubbly exuberance, Brooklyn-accented loquaciousness, and peculiar comfort with her psychic gifts belies insecurity and self-debasement. And Errico’s poised, mannered, suppressed Melinda belies the broiling, impolitic, rash female maverick. For she erupts, revolts against the cultural limitations of her sex, and sets out on a fateful voyage of doom.

But when Daisy discovers the tape of her regression sessions and realizes she loves Bruckner, she becomes jealous of the aspect of herself beloved by the doctor – Melinda. The amazing “What Did I Have That I Don’t Have?” that Daisy sings in anger and hurt is ultimately ironic, because she doesn’t realize that her past consciousness of Melinda is an element of her own character and ethos. Yet the song through Errico’s instrument becomes transcendent, a universal song of lost love after initial passion has faded. That both Daisy and Melinda are ultimately one she cannot realize until Bruckner evolves to understand his love for all of her.

Melissa Errico and ensemble in Irish Repertory Theatre’s ‘On a Clear Day You Can See Forever,’ directed by Charlotte Moore (Carol Rosegg)

That one character (Daisy) encompasses and feeds into the other (Melinda) reveals Alan Lerner’s depth in flirting with the complexity and intricacy of consciousness. And the depth with which the writer characterizes the evolution of Dr. Bruckner’s self-transformations also reveals his flirtation with novel, profound ideas.

The love Dr. Bruckner feels – first for Melinda – evolves into the knowledge that Daisy and Melinda inhabit the being of the same woman. Thus, at a crucial moment he saves her and assists in her own evolution as a modern woman who loves a worthier man than the one left behind in another time and place. Bogardus renders the gradual evolution of Bruckner’s love beautifully in his ironic comments to Melinda when she and Moncrief show affection to one another. Then it gloriously bursts out in his incredible, full-throttle rendition of “Come Back to Me” after his revelation that he has grown to love Daisy/Melinda as one.

Melissa Errico and the cast of the Irish Repertory Theatre’s revival, ‘On a Clear Day You Can See Forever’ (Carol Rosegg)

Clearly, in helping her connect the present with the past in her own consciousness, Bruckner frees himself to love. And he helps free Daisy to return his love without jeopardizing her own psychic integrity. Finally, they solve how the mystery of Melinda’s death links to the present in a vital, uncanny way. The union of Daisy’s and Melinda’s consciousnesses binds Bruckner and Daisy in an incomparable clarity of vision, a way of seeing that gives them and their friends a glimpse into their interconnectedness with forever, the spirit, the eternal.

At the crux of Lerner’s and Lane’s work remains the theme that life encompasses more than materialism and empiricism. And in everpresent time, the past, present, and future may conjoin in the spiritual plane. We may be too distracted with the corporeal realm to understand how. Yet perhaps there are indeed realms of forever to which all of us are attached, whether we realize it or not. Finally, as Daisy Gamble learns, for those who have a gift of “second sight,” life is expansive. Used beneficially, such gifts may allow one to enjoy life’s beauties more fully and help others do the same. And in that expansiveness, one will probably discover the true meaning of love. The title song, “On a Clear Day You Can See Forever,” best represents this theme.

In her adaptation of this musical Moore reconfigures the action and characters concisely and adriotly. With the help of music director John Bell, choreographer Barry McNabb, scenic designer/projection artist James Morgan, costume designer Whitney Locher, lighting designer Mary Jo Dondlinger, sound designer M. Florian Staab, projection designer Ryan Belock, the musicians, the ensemble, and the leads, this version of On a Clear Day You Can See Forever shines like a beacon of truth.

Do you yearn to  get away from the current news cycles and our country’s present turmoils? If so this is a must-see. For you will have an extraordinary and uplifting time watching the team beautifully, seamlessly render the illusive with authenticity. The cast’s ebullience and the show’s ironic twists of humor will remind you of goodness. And you will feel embraced by the airiness of light. It would be a pity to miss the fun and romance, layered with an ethereal message we need to be reminded of.

The Irish Repertory Theatre’s On a Clear Day You Can See Forever runs until 12 August. Tickets are available online.