White Noise, written by Suzan-Lori Parks, directed by Oskar Eustis is a long thrill-ride into the psyches of thirty-somethings reeling from the abuses of previous generations’ willful negligence, regarding racial and gender mythologies. These stereotypes and demeaning memes abide with a vengeance below the surface of friendship power dynamics and mixed-race love relationships. Indeed, Parks suggests these are embedded in the American cultural DNA. And not even elaborate experiments such as the one long-time friends Leo (Daveed Diggs-always the consummate actor/performer and a joy to watch) and Ralph (Thomas Sadowski acts with moment-to-moment precision) embark on to expurgate Leo’s fears of being shot while black, ameliorate issues of racial identity politics int heir psyches..

The ultimate message in Parks’ White Noise remains: if these race and gender myths abide among friends, then what hope is there to modify, redeem and heal the nullifying cultural divides that exist among races, genders and economic classes that are at odds with one another? This is especially so in the retrograde Trump era when noxious white supremacist groups have been empowered to embrace hate and fear by a president who finds upholding the constitution and civil rights laws loathsome and inconvenient.

The inherent sado-masochistic, master/slave ethos deep within the mindset of all who have white/black relationships and their gender derivatives are mostly covered by social veneers of liberalism. Parks lays bare this phenomenon in a gradual reveal that she stages within an artificial construct prompted by Leo after he has been traumatized by the police. However, it is an idea that Leo long thought about to deal with his inability to sleep which he attributes to an ambient fear begun at childhood. It is a fear that has morphed like a monster into unsettled apprehensions about being black and living in a repressive culture of white privilege.

To free himself of the apprehension and feel that he is empowered in his own identity apart from racial, socio-political constructs, Leo devises the Master/Slave freedom project. He finally convinces his professor/writer friend Ralph to contract his services as a slave. Leo believes that if he is owned by Ralph who will be his Master for 40 (a magically symbolic number) days, he will be psychologically secure in the knowledge that he is protected by his “Master” in a culture that promulgates institutional racism and brutality against blacks via the justice system, economic inequality and unequal opportunity. As a result of this experiment at the end of the 40 days, Leo believes he will move to the core of his own reality and become free of the stereotypes, memes, lies, matrixes, objectifications and internalizations of abuse inherent in the culture and society of America.

During their extended friendship over the years, Ralph and Leo believed they had risen above racial gender politics and achieved a state of being “cool” and close with each other. Their friends/girlfriends Misha (the humorous Sheria Irving) and Dawn (the crisp, on point Zoë Winters) whom they’ve also known for years and have swapped as partners provide the security and sanctity of love and help to be the glue that has kept the group together and flourishing.

But during Leo’s and Ralph’s Master/Slave experiment, the women learn that they have been lying to themselves and each other. Indeed, for Leo, Ralph, Misha and Dawn their outward congeniality, love and closeness is a ruse, a construct they have created for and with each other to keep the “outer hellishness” of the culture away from them.

But the ruse hasn’t worked. In one way or another all are lost and feel incomplete, despite their relative successes, a fact revealed by the conclusion of the master/slave project.

Indeed, the experiment overturns the foursome’s relationships, their perceptions of each other and ultimately how they view themselves. In the past they have fed off the group’s collective identity and while it has made them feel loved, it also has hindered them. Misha, Dawn and Ralph have cheated on each other and are incapable of fidelity, peace or joy. Though they were able to get around being “cheaters” with secrecy and forgiveness, they remain unfulfilled in love.

That each is searching is obvious, though they are not sure what they want or who they want it with, for they are identity challenged. Only Leo has been faithful to Dawn. Only Leo, Parks’ heroic protagonist has enough self-awareness to understand he is chained by the past in the present. He realizes that he will only be at peace by finding a way to free his being to live in harmony with himself.

Over the course of the master/slave project, Parks reveals how the dynamics of this foursome fragments. Their group identity together and with their partners cannot withstand their own hypocrisies which the project reveals. Ultimately, as Leo learns, they also learn how they’ve allowed the cultural constructs to imprison them. And their attempt to avoid these underlying hate-filled concepts that surreptitiously guide their behaviors in their friendships and love relationships with each other has thwarted their quest for peace and autonomy. Their ability to forge their own healthful identities and act on their self-knowledge with a confidence that will free them has been constrained. 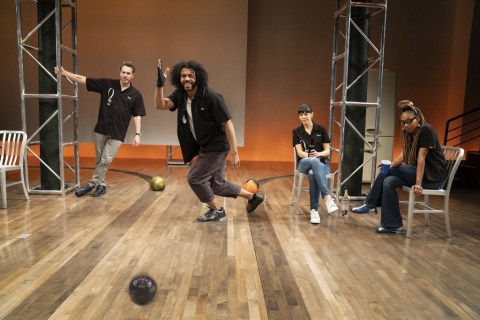 After Leo and Ralph “progress” into their simulated journey back into history to effect the egregious acts of domination and subservience, the worm turns: the relationships between them and among their girlfriends morph. “Freed” to imprison himself within the soul crushing white privilege dynamics, Ralph throws himself into the “master” tropes and changes his attitude to become more bossy and edgy with Leo. Influenced by members of a White Club he joins as a secret society, he leases a punishment slave collar for Leo and pushes the master/slave behavior to levels of  cruelty and exploitation he would not have thought possible of himself prior to their experiment.

Interestingly, Leo for a time is able to sleep and rest in this masochistic abuse of slavery because it is “out in the open,” and “in your face.” Above all, he is the “author and finisher” of his slave role having come up with the contract and agreeing to the amendments that Ralph suggests. By controlling the construct himself and choosing to be subservient, he empowers himself with what he learns. As he becomes freer, Ralph’s dignity and honor are compromised, though superficially he thinks he is empowered. However, by engaging as Leo’s “Master,” Ralph becomes more loathsome to himself. It is, a state which he fought his entire life, but was incapable of overcoming. Ironically, in the “Master” roll, he further enslaves himself as a hateful loser who “gets off” on being exploitive.

The lies and pretended altruisms end. Leo’s “cool” relationship with Dawn (Winters) is over and Misha’s (Irving) hidden sexual relationship with Dawn dissolves in a fight. However, Misha admits she will most probably still keep Ralph around because by having a white boyfriend, she feels protected as part of the privileged culture. That they will continue to be unfaithful to each other doesn’t matter. 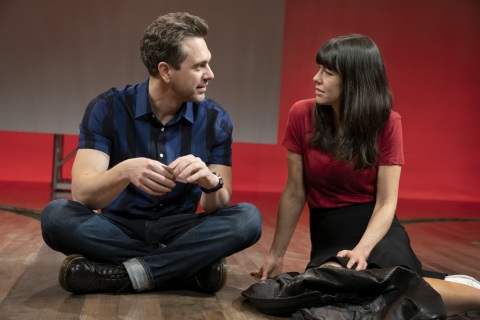 By the conclusion of Parks’ dramatic polemic, Leo understands his personal self-imposed oppression he internalized from the culture’s oppressive mores. He also realizes that like his ancestors, in spite of it, he will thrive and prosper. On the other hand Ralph’s weakness so manifests to himself that he is broken. Indeed, white privilege which is meant to prosper white males in their dominance of all “under them in the culture,” actually weakens and enslaves them worse than those they attempt to victimize. The women who go along with the white privilege program are swept up in the abuse and are forced to live in a sub rosa muddle of lies and obfuscations which propel them into an abyss of misery and torment. Only if they work to extricate themselves from the fears that destroy their wholeness, will they become free to establish their own autonomy and identity.

Parks’ play is a powerhouse in its satiric elements and in its themes. She brilliantly presents her concepts through the interplay and active relationships between and among Dawn, Leo, Ralph and Misha. Eustis’ direction is insightful and illuminating. The performances, are solid; Daveed and Sadoswki are electric and the effect they produce is frightening. Irving and Winters continually surprise, and Irving’s program “Ask a Black” is absolutely hysterical. The satire throughout is astounding with just enough subtle rendering to punch you in the gut with a bit of truth to leave you breathless.

As a caveat, I nodded out during some of the solos which were expositional and might have been slimmed down to keep the pacing taught. I did find I was completely focused during Diggs’ opening monologue which was electric. His easy, relaxed bonding with the audience completely engaged me. The other solos were less so, not a fault of the actors or direction. It may have been the order in the overall arc of the play’s development. Or the solos might have been a tad redundant with explanation not dramatization.

White Noise brings one-of-a-kind performances to a thought-provoking, memorable play about the subtle, historic mores and influences that control us if we are not introspective or self-examining. It is a must-see which runs with one intermission at the Public Theater until 5 May. For tickets go to the website by CLICKING HERE.