Tootsie, the 1982 film based on the story by Don McGuire and Larry Gelbart and the Columbia Pictures motion picture produced by Punch Productions, starring Dustin Hoffman, is a multi-award winner which is sanctified for its time. The Broadway musical comedy with Music and Lyrics by David Yazbek and Book by Robert Horn has been a long time coming and the wait has been well worth it.

The production starring the likeable and prodigiously talented Santino Fontana is a wondrous addition to this amazing Broadway season. Fontana’s voice is incredible, his dead pan timing bar none, his negotiation of the complexity of this titular role could not be more spectacular. Director Scott Ellis shepherds Fontana and the cast with acuity and grace.

The Tootsie characterization has been cleverly updated to include superb jokes related to the #Metoo movement. Indeed, what was a maverick fluke in the 1980s film version about gender roles and sexual predation, certainly fits like a glove for our time. Its ridicule of various themes connected with political correctness about gender is cleverly managed. Regardless of left or right we scream with laughter about the self-righteousness of both positions. Tootsie balances on a median between extremes. This is a good thing.

For me, it is a welcome novelty after the mainstream media and social media have become the playland of political, click bait trolls, looking to garner hits and stir controversy. Tootsie is too adroitly written by Robert Horn for that. The only tweets and Instagram hits it will be receiving are for the sustained hilarity and classic comedic situations which bloom like roses in a never-ending summer of delight. I mention roses because the principals will be receiving bouquets for their virtuosity and excellence. Their stellar performances assisted by the equally adroit song and dance talents of the ensemble will run the gauntlet of award season flying high.

Generally, the plot is similar to the film with the major transformation that Michael/Dorothy is an excellent actor who primarily looks for theater work. As in the Michael of the film he is arrogant about his talent, and the conflict’s arc of development sparks when Michael interrupts director Ron Carlisle (Reg Rogers) during the rehearsal of a lousy play. Reg Rogers’ portrayal of the smarmy, oily potential predator who is a Bob Fosse-type without the talent is wonderfully funny.

Michael attempts to ingratiate himself with the director Ron Carlisle about his role in the ensemble. Ironically, Dorsey’s narcissism manifests in a twitting of the actors’ dictum: “There are no small parts, only small actors.” Michael suggests there is some confusion about his character’s backstory. When Carlisle tells him he is just in the ensemble and doesn’t require a backstory, Michael is the narcissist in his response.

The director’s outrage is spot-on hysterical and we feel little empathy for Michael who is fired outright. His arrogance and superiority have pushed him over the line as his agent (Michael McGrath) substantiates by firing him in a blow that is a touché! Michael knows he’s a mess, but lacks the power or wisdom to understand what to do about his external crisis, not realizing it’s best solved by changing internally.

Santino Fontana sings “Whaddya Do” attempting to negotiate his angst at being unemployable. We are unimpressed by his fledgling sign of despair in this song which doesn’t go to the root cause. He must learn much more about himself; he is not there yet. A crucial moment occurs when Sandy visits and informs him about a job she plans to audition for, then has a “slight” breakdown discussing it (“What’s Gonna Happen”). Michael gets the idea to morph into Dorothy Michaels (“Whaddya Do reprise) and audition for the job, having to suppress his male ego in a “female” body to disguise his loathsome face.

To get the role which seems highly unlikely, he’ll be Nurse Juliet in the ridiculous sequel to Romeo and Juliet entitled Julie’s Curse, an outlandish dog of a play that will most probably close opening night. As Michael auditions with “Won’t Let You Down,” Santino Fontana’s voice soars in triumph and realization. During the song, he gives birth to his female ethos and rounds out the personality of Dorothy Michaels housed in a “truck driver’s” body.

The production never returns to a moderate balance after this, though it has been set-up by a rollicking warm up with Sarah Stiles’ amazing work (more about that below). One reason why the show is a winner is that it glides into the heavens with the organic characterizations, the plot twists, turning points and two love stories (the second one is a ripping hoot thanks to the adorable John Behlmann as naively obtuse Max Van Horn who falls in love with Dorothy/Michael.

The actors’ pacing has been timed with precision to deliver the superbly engineered and crafted one-liners arising from the action and characterizations. The audience never recovers from these, swept up in the hysteria and barely catching their breaths for the next joke. The play is well-structured, building toward the two climaxes, one at the end of Act I and the other near the conclusion of Act II.

The principle theme, that Michael Dorsey has grown as a human being with the help of releasing his feminine side is winsomely revealed as a “la, la, la,” in the film, downplayed for its vitality and power. Santino Fontana does a phenomenal job in bringing this theme to the fore in his solos with his rich sonorous voice. The music strengthens this theme and others. We are reminded that males are ashamed to acknowledge emotions in the company of other males. Today’s retrograde social currents about the bullying “macho male” in the White House who is “cool male” in his indecency makes Tootsie an important show for our time.

A lot of the humor arises with the gender switching. The songs reveal softer scenes as Dorothy must negotiate “his” love for Julie Nichols (Lilli Cooper). The two actors have some wonderful moments as budding BFFs. Their conversations ring true for us today and Julie’s characterization has also been rounded out with profound depth in the writing and in Cooper’s winning portrayal. Julie is a modern, wise woman who does not cave in to the director who attempts to smooze her with his position. She remains steadfast to her career and does not marry. 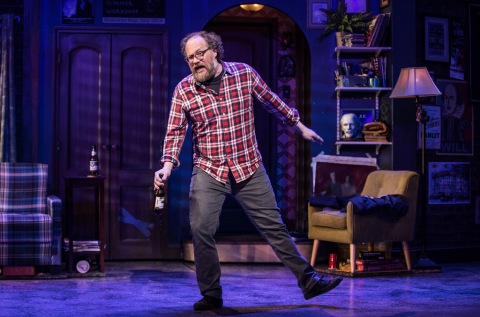 The only “feminine woman attitude” the show allows is Michael/Dorothy’s Southern accent and this is an ironic blind. Supported by wealthy producer Rita Marshall (the excellent Julie Halston who pulls out all the stops) Michael/Dorothy takes a stand with the help of the ensemble and Julie. Dorothy Michaels reconfigures the show into one that is a going to be a shining hit (don’t ask how). The producer, Julie and the other actors appreciate Dorothy, though the director is angrily flummoxed. But Carlisle is masking chauvinism in his heart which we infer by his actions toward Julie. However, Carlisle’s producer is a woman who supports Dorothy’s “female” intuition about the play and her gumption to suggest revisions.

Michael’s acting talent and suggestions are given a hearing and used. Juliet’s Curse is transformed into a hit. By the end of Act I, “everything’s coming up roses” and Fontana’s Dorothy pridefully encourages himself by crowing out “Unstoppable.”

The song is a brilliant, humorous irony. Actors through experience, learn not to make presumptions about their future, out of sane superstition. (Sandy takes this to the reverse extreme.) Michael is headed for a fall. Like all of us do at one point or another, he does something to destroy his own success. As he attempts to recover, he digs a deeper hole for himself. 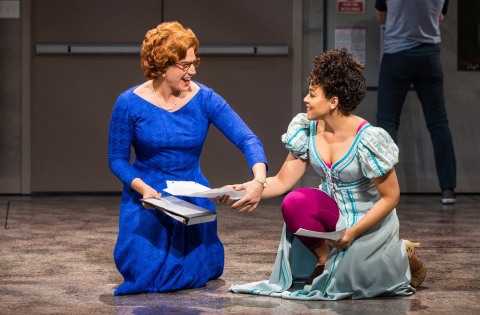 Roommate Jeff (Andy Grotelueschen) who has been waiting for him to choke, gleefully beats him over the head with his stupidity in the second funniest song of the production, “Jeff Sums it Up” at the top of Act II. Grotelueschen’s performance in this scene (with Fontana as the straight man) is THE MAX! Grotelueschen’s portrayal as the “frustrated” friend Jeff is visceral. His timing is 100%. The effect generates our sidesplitting, roaring laughter. We are down with both Jeff and Michael.

As Michael crashes and burns Greek comedy style., we intuit that the worst is coming. It is only a matter of time before Dorothy’s drag act will be exposed.

I didn’t expect to be so impressed, by this clever reworking of Tootsie, especially with regard to the music. However the songs are damned funny and the music doesn’t draw attention to itself as some composers are wont to do. Indeed, the music serves the story; the lyrics and music meld like white on rice.

I examined hawk-like whether any songs appeared to just take up space because “after all it’s a musical comedy” and “a song is needed,” etc. NO! Indeed, all the best moments spring from the characters and portrayals. These spur the conflict and create riotous fun. I am hard pressed to critique any of the musical numbers as ancillary or humor killing. A few are extraordinary and a few are memorable pop songs with a beginning, middle and end that doesn’t wander into nothingness.

The two songs you won’t remember (because you’ll be rolling in the aisles) are sung by Michael Dorsey’s friends, his roommate Jeff (Andy Grotelueschen) in the second act and his actress friend Sandy Lester (Sarah Stiles) in the first act. Both songs are organically based in the characterizations. They concern human emotions that are so identifiable that the specifics don’t matter.

For example, in the song “What’s Gonna Happen!” Sandy takes off into a rant about her life as an actress, a state she apparently goes through before auditions. Her imagination terrorizes her into believing in a future and events that don’t yet exist. As she escalates her “crazy,” she explodes. She spews clouds of fear in a musical mixtape of strung together happenings that reach a level of frenzy that is beyond any drug to cure it.

Sarah Stiles is drop dead fabulous. Gobsmacking! We get it! We have been our own terrorists like Sandy, whipping our anxieties to an inner insanity of fear predicting our own nonexistent events. It is our brilliant healing that we find it uproarious to see and hear someone dare to express their delusions ALOUD in a rant more wacko than ours. The song and music are perfect; Stiles’ portrayal is 100 percent. Scott Ellis’ direction and staging elicit this exceptional moment, one of many in this humorously glorious production that kills it again and again.

I have not deeply belly-laughed this much during a Broadway show, except for British productions where the timing is as perfect as it gets. Never during a musical. I have nothing more to say, except you will regret not seeing Santino Fontana, Lilli Cooper, Sarah Stiles, John Behlmann, Andy Grotelueschen, Julie Halston, Michael McGrath and Reg Rogers, every one of them a gem and together, miraculous.

Tootsie runs at the Marquis Theatre with one intermission. For times and tickets, go to their website by CLICKING HERE.