← ‘King Lear’ Starring Glenda Jackson, a Royal Performance at the Cort Theatre
‘Fiddler on the Roof,’ in Yiddish, a Powerhouse of a Production →

‘The Plough and the Stars’ by Sean O’Casey, the Sean O’Casey season at the Irish Repertory Theatre

When it premiered at The Abbey Theatre in 1926, The Plough and the Stars initially opened to acclaim. However, word got out that O’Casey had written a play critical of Irish nationalism and religion, and the acclaim turned to disapprobation. O’Casey elected to focus on the hapless Dubliners, many women and children, who had been swept up in the bloodshed of the Easter Rising of 1916. During the five days of fierce fighting between the British and the Irish Citizen Army and Irish Republican Brotherhood, the British who had brought in heavy artillery, machine guns and bombshells with over nine times the troop strength of the Irish converted central Dublin and the tenements where citizens lived into a war zone. Because of the hundreds of citizen fatalities and thousands injured, the Irish rebels surrendered to save the city. The British took revenge with arrests and summary executions of the organizers, sealing the ill-will of Ireland and guaranteeing the irrevocability of Irish Independence.

In this last production of the Dublin Trilogy, the Irish Repertory Theatre, which has presented an amazing season of Sean O’Casey’s works, ends with its most masterful and emotional production to date. Directed by Charlotte Moore, O’Casey’s The Plough and the Stars remains a sterling and representative human drama that soars into the heavens with the timeless message that there are no victors when members of the human family take up arms and kill each other. Assuredly, it is the innocent trying to make it to the next day, who become the casualties of violent conflicts. Those who die achieve a final peace; the living have to deal with the horrible memories and consequences of the aftermath of war.

The actors expertly shepherded by Moore effect O’Casey’s themes with emotional grist and power. As an ensemble their work together is exquisite, paced, focused, present. Because of their attention to moment-to-moment living onstage, the impact that rises from scene to scene and especially in the last scenes when the conflict and suspense are greatest are breathtakingly real and tragic. 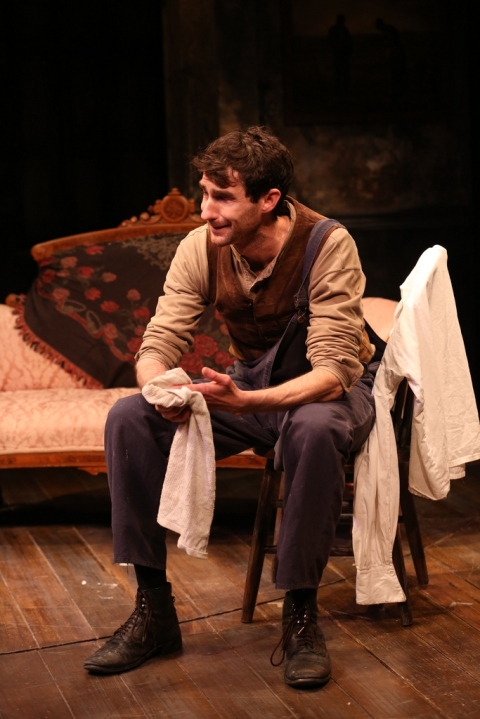 The play follows the homely interactions of tenement dwellers in the latter part of 1915 and during the Easter Rebellion of 1916. These scenes of the every day lives of the tenement dwellers draw our empathy. In their discussions we become apprised that there are marches and meetings of various Irish groups who are gathering to amass political sentiment in support of the hoped for Irish rebellion and move toward independence. The meetings which have gained fervent advocates eventually come to a head and the play’s action shifts to events in Dublin during Easter Week 1916. It is then that O’Casey most acutely and poignantly reveals how these horrific events impact the lives of the Dubliners who live and hide in the tenements as they are shelled, shot at and warred against by the British Tommies who attempt to quash the rebellion.

In the first part of the production we note how O’Casey illustrates the divisions among the Irish citizens living in one lower middle class Dublin tenement. These characterizations develop and remain the focal point of the play. Some of the Dubliners have antithetical political affiliations like protestant, pro-British Bessie Burgess (the wonderful Maryann Plunkett who gives a heartfelt, frenzied, emotional portrayal throughout). Bessie’s son fought and died with the British as a Dublin Fusilier during early battles of The Great War. Her expressed rage and fury at the supporters of Irish Independence is understandable, though the other tenants think she is loathsome. Indeed, by the play’s end O’Casey’s twist of characterization proves her a formidable human being; and Maryann Plunkett brings this out in spades.

Others, like fiesty Peter Flynn (the humorous Robert Langdon Lloyd), the life-worn Mrs. Gogan (the fine Una Clancy) and Fluther Good (Michael Mellamphy is spot-on in his rousing portrayal of the carpenter who represents the typical working man) empathize with the Irish cause of independence as Catholics. Meanwhile, The Young Covey (the excellent James Russell) is the critical, anti-religious, acerbic intellectual who strafes the cause of independence with his caustic remarks. He is frustrated that the socialist cause he advocates has been redirected from the Worker’s of the World uniting to overthrow the capitalistic system.

Much of the humor in the first part of the play centers around O’Casey’s identification of the cross section of individuals who are disparate from one another in beliefs, religion and intellectual ethos. Yet they live in Dublin tenements and make up the culture and society of the city as they remain economically oppressed and without a voice in the government. We laugh as they carp and criticize each other to the extent that one wonders how the country will unite against the British at any level. Into this convulsed and funny hodgepodge of characters come the newly weds, the sweet, romantic Nora (Clare O’Malley gives a fervent, emotional and powerful performance throughout) and husband Jack (the sensitive and forceful Adam Petherbridge) who eventually, despite Nora’s surreptitious attempts to prevent this, is proudly made Commandant in the Irish Citizen Army.

Jack, infuriated that Nora withheld information of his promotion out of fear for his death, argues with her vehemently. Indeed, her self-interest and duplicity push him right into the arms of his mates. The scene where she admits she lied is dynamic and powerful. O’Casey’s characterizations are authentic and the actors (O’Malley and Petherbridge) are so letter perfect that we imagine such scenes playing out in households throughout Dublin and in a universal sense that this occurs in every war fought regardless of politics or nation. The timeless quality of war as a sacrifice of innocents is everpresent and beautifully rendered thematically in this scene.

As Young Covey, Fluther and Flynn meet and have drinks in a Public House after listening to speakers and continuing to listen to them from inside the pub, we meet additional Dublin denizens who will be impacted by the coming rebellion. These are the “lady of the night” Rosie Redmond (Sarah Street) and the Bartender who also plays Sargent Tinley (Harry Smith). In this interlude at the pub, the tension outside is rising and we note the success of the march and the rousing political speeches meant to mobilize the crowds. 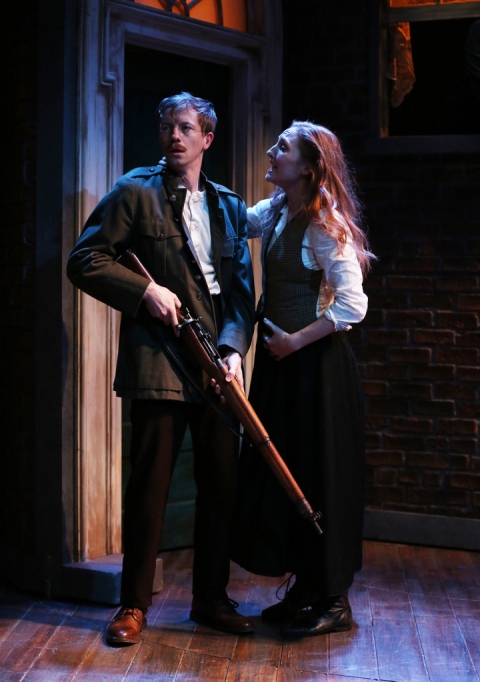 When Jack and his mates come into the pub and conclude the scene with their nationalistic cries, they wave the flag (The Plough and the Stars, and the Tricolor Flag of Irish Independence). As these volunteers uphold their allegiance to a free Ireland, they put their family, wives and homes second. Nora is abandoned and forgotten as Ireland becomes Jack’s family.

In the next scenes that take place during the Easter week, April 1916, the irony of Jack’s heady, ebullient nationalistic sentiment is pitted against the frightful horrors that these volunteers and tenement dwellers face in the violence during the five days they confront heavy artillery and machine guns. The booming sounds are heard in the distance. Nora who looks for Jack to bring him home (an ignominious, selfish and cowardly action from Jack’s perspective) proclaims that she sees the fear in the Irish soldiers’ eyes while the soldiers she meets tell her she is shaming Jack.

In this fabulously directed scene that is tense, frightful, poignant and rage-filled, Nora struggles physically with Jack to keep him with her. And Bessie screams epithets and insults at Jack, Captain Brennan (John Keating) and the wounded dying Lieutenant Langon (Ed Malone). At the height of the drama, Jack berates Nora for attempting to keep him from fighting the cause, then he and the others leave to look for a doctor. Bessie who has a turn of empathy for Nora brings her safely inside, then runs for a doctor to help Mrs. Gogan’s dying daughter Mollser (Meg Hennessy). Kudos to the superb ensemble and the principals whose urgency and focus create the incredible tension in the scene. The audience is enthralled throughout.

As marvelous as Act III is, O’Casey’s climax in Act IV is without parallel and Moore and the actors are beyond exceptional in bringing the conclusion to its final glowing draw-down. O’Casey hammers his themes. These, he has seeded earlier in the play. In the final act they foment with the growing chaos which sweeps up various individuals unwittingly caught in the rebellion, i.e. The Woman from Rathmines (Terry Donnelly). Everyone who can be represented is. O’Casey reveals the tragedy and futility of innocents dying as they are mistaken for “the enemy.” In this last act of this most incredibly paced and dramatically written of his plays, we understand the genius of his message to humanity, which has been ignored and will continue to be ignored long into the next century.

There is no spoiler alert. You will just have to see how the conclusion unfolds ironically in this must-see production which is truly magnificent and fiercely trenchant and timely. I cannot praise this production with high enough encomiums for the director and cast except to say it will be a damn shame if you miss it.

Charlie Cororan (Scenic Design) Linda Fisher and David Toser (Costume Design) Michael Gottlieb (Lighting Design) Ryan Rumery and M. Florian Staab (Sound Design) and Ryan Rumery (Original Music) and others on the artistic team do a superb job in bringing about the authenticity of this production.

The Plough and the Stars (with one intermission) and the entire Dublin Trilogy can be seen until 22nd June at the Irish Repertory Theatre (132 West 22nd). For tickets and times go to the website by CLICKING HERE.

Posted on May 21, 2019, in NYC Theater Reviews, Off Broadway and tagged Charlotte Moore, Irish Repertory Theatre, Sean O'Casey, The Dublin Trilogy, The Plough and the Stars, The Sean O'Casey season. Bookmark the permalink. Leave a comment.

← ‘King Lear’ Starring Glenda Jackson, a Royal Performance at the Cort Theatre
‘Fiddler on the Roof,’ in Yiddish, a Powerhouse of a Production →