At last! There’s a new and improved perspective of “seniorhood” that doesn’t include steps up the ladder of infirmity and dementia: from independent living to the “Rose Court,” from memory care to the palliative slip-away into Hospice.  Indeed, as we appreciate and glory over the vibrant humor and comedic power of situation and characters in Bess Wohl’s Grand Horizons, we learn a thing or two about “old folks” and “the younger generation” in this rollicking yet profound play.

First, age is attitude. Second, the older one becomes, the more one must think outside of the box, especially out of the type found in replicated, independent living housing. Third, the closer one gets to the “end,” the more one should “rage against the dying of the light.” Fourth, one can experience in one’s later years a vision of life that is freeing, one that destroys the cages we created our entire lives: for they are a mere facsimile of living. Indeed, contrary to seniors who settle for the cardboard, cookie-cutter artificiality of existence in vegetative, pre-fabricated places like Grand Horizons, Wohl reveals that it is possible to make life-affirming changes even at the age of 80 years-old as does her protagonist, Nancy, the amazing Jane Alexander.

The playwright’s brilliant script is cleverly paced by Leigh Silverman’s precise direction of the superb ensemble. Masters of the comedy of real, of humor springing from grounded, soulful authenticity, the actors led by Jane Alexander and James Crowmwell pop the quips, jokes, one-liners, twists and turns of phrase and mood to keep the audience laughter rolling in waves of joy. Wohl’s well-crafted writing absolutely sings with comedic grace and profound themes, sharply channeled by Silverman. These include the importance of breaking through the stereotypical concepts of aging, family, parenting, marriage, love, intimacy, individuality and autonomy.

The play’s situation is common enough. Nancy and Bill, a “typical,” retired, fifty-year married couple have taken the next steps toward their journey’s end by moving into an independent senior living community. Is it the replication of row after row of modestly, flimsily built homes in a vast similitude (Bryce Cutler’s projection design) that sets off Nancy? Or perhaps what triggers her is the whitewashed, pleasant kitchen/dining nook/living room interior of “peaceful” uniformity (Clint Ramos’ set design) though it is festooned by artificial greenery.

We learn later in a profound and symbolic irony, that the lovely plants don’t even have the opportunity to die bio-dynamically as a result of Nancy’s over or under watering. They just go on and on and on in lifeless “eternity.” Nancy’s eyes open to their fake permanence later in the play, after she has confronted herself, her children and Bill with the truth. Her ironic comment about their artificiality has to do with the realizations of her own growth.

The vast sterility of this community is only heightened by the play’s opening of Nancy’s and Bill’s dinner that is choreographed to reveal a mutually synchronized preparation that they execute silently with near robotic precision. Well, enough is enough in this perfect haven of deadness. I could hear Nancy’s thoughts as she looked at Bill as they, with synced movements in unison, took out their napkins, then began to drink and eat. What more could anyone their age wish want? They appear to have it all. But is this the exuberance of life we wish for?

At this point Alexander’s Nancy lets the desires of her heart explode from her lips and the train moves onto the express track and doesn’t stop until she achieves what she wants, sort of, by the play’s end. Jane Alexander’s delivery of the opening lines of conflict are spot-on humorous and ominous: “I think I want a divorce.”

The excitement of what Nancy envisions to be on her grand horizon for the future is in imagining its open-ended possibilities, even if it is merely sitting in a restaurant and enjoying a meal by herself. Clearly, she wants no more imprisonment by the chains of coupling. She wants to know her own power, strength and autonomy apart from defining herself as Bill’s wife. As the play progresses, we discover she has already established her autonomy away from her family, though she has kept it secret. Interestingly, perhaps as a long awaited response, Bill is striking out on his own in this senior community by taking stand up comedy classes and enjoying a relationship with Carla (Priscilla Lopez). We learn later that this may be his response to what he has known all along of Nancy’s secrets.

As these details are gradually revealed we enjoy watching the incredulous sons, Brian (the wonderfully funny Michael Urie) and Ben (Ben McKenzie is the harried lawyer control freak who can’t relax). Both are shattered by the announcement of the divorce. Ironically, they don’t want their parents to leave their comfortable “mom” and “dad” roles to be individuals, redefining who they want to be. They want stasis, not for their parents’ happiness but for their own comfort and assurance. Brian’s and Ben’s perceptions of their parents living apart from each other are at odds with their parents’ expectations. For Nancy and Bill divorce will be a positive experience. The sons cannot wrap their heads around this, especially that Nancy is planning to live in an Air Bnb. Their mom in an Air BnB: a horror!

Wohl takes advantage of this set-up in a refreshing way. In an ironic reversal, with the help of Jess (Ashley Park) Ben’s wife, Brian and Ben don the parental roles. They attempt to gauge what has recently happened, as they try  to square away what mom and dad must do to resurrect the bloom on their long-dead marriage. Their failed attempts are humorous. Adroitly, the actors bounce off each of their characters’ stress-filled emotions with peppery dynamism and wit.

Brian’s neediness is easily identifiable throughout and is integral to his character as a theater teacher who creates 200 characters in The Crucible so “no kid will be left behind to feel left out.” It is Brian who is so dislocated by his parents’ future divorce, he worries about where he will spend Thanksgiving which is six months away. His sensitivity exceeds his parents’ emotionalism. The dichotomy is hysterical, yet heartfelt.

Ben’s eczema flares as he attempts to take control of where each of his parents will live. And then there is Jess providing the counseling so Nancy and Bill can return to their once affectionate times with each other. With Ben and Brian looking on with hope at Jess’ powers, the results that follow are riotous. As their visit with Bill and Nancy to persuade them not to divorce lengthens, Jess begins to look at her relationship with Ben differently as he reverts to Bill and Nancy’s son. Where has her husband gone or is this just hormones because she is pregnant?

The resistance of the younger generation to the divorce is a powerful obstacle which the parents find impossible to answer to their children’s’ satisfaction. It provides conflicts among the characters from which Wohl tweaks and teases thematic tropes. What are the phases and stages of our lives? How do we define them apart from cultural stereotypes and familiar roles that appear to offer comfort, but are actually binding and nullifying? What price do we pay to create our families and sacrifice for children with expectations that are unreasonable, or worse, false? From parenting to aging, no one can provide a guideline for what to do that will resonate completely with our individual lives. Every family, every person in that family is different. We fail, but perhaps it is worth it because we learn and if we are open to it, we heal.

Nancy’s desire for a divorce sets the entire family roiling except for Bill, who appears to remain calm. Of course Wohl is always pushing the envelope to get the maximum surprise and intrigue from her characters, who remain interesting and intensely human. 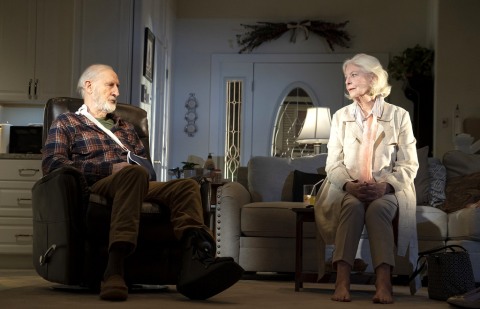 The audience’s gales of laughter organically spring from Nancy’s revelations that she has pursued her desires and dreams despite the intrusions of raising her two sons and making a home for her husband Bill. Indeed, the mother they believed she was, is not who she presented herself to be. She had another love. And when she expresses the importance of her closeness and intimacy with this lover to Brian (Urie brings down the house with his responses to her sexual descriptions) in the hope of explaining why she is leaving Bill, he cannot cope with understanding that his mother is perhaps a woman first.

This is something many children have difficulty with unless the parents, with good will and flexibility, help them to understand love, sexuality and intimacy. Bill and Nancy never considered going into these discussions with Brian and Ben because they never went there with each other. It is a telling irony that catches up with all of them at this juncture.

Clearly, Nancy runs deep as does Bill, who is a cypher that Wohl reveals by the conclusion, when we learn that both Bill and Nancy have kept intimacies and secrets to themselves. Yet, they do love one another. The humor and pathos come when we note how difficult it is for Ben and Brian to understand their parent’s particularities when they believed the packaged family meme that “togetherness is happiness.” That meme when they admit it, satisfied none of them, least of all their parents.

All of this eventually tumbles out after Brian, Ben and Jess visit, stay and don’t leave until Bill and Nancy politely tell them to go and reassure them that they are going to be all right. By the end of the play, Wohl opens the door to hope. Even if they live apart, maybe Bill and Nancy can begin to see each other outside of the roles that threatened to box them in “til death did them part.”

Grand Horizons runs with one intermission at Second Stage Theater, The Helen Hayes Theater on 44th Street between 7th and 8th until March 1. For tickets and times to this LOL production CLICK HERE.