‘Scotland, PA.’ a Smashing Musical Adaptation of the Titular Film-Spoof of ‘Macbeth’ 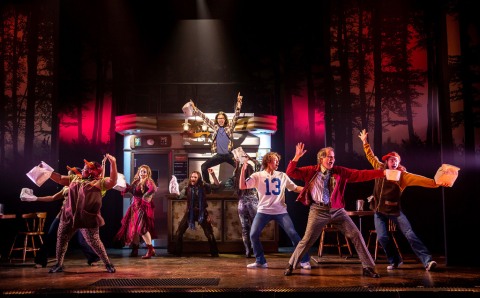 The Company of Scotland, PA, directed by Lonny Price, book by Michael Mitnick, music & lyrics by Adam Gwon, adapted from the titular film by Billy Morrissette, based on William Shakespeare’s ‘Macbeth’ (Nina Goodheart)

Scotland, Pa directed by Lonny Price, with book by Michael Mitnick and music and lyrics by Adam Gwon is a rollicking musical with clever twists, sardonic comedy and a morality tale tucked somewhere in between the all beef patties, special sauce, lettuce, cheese, pickles, onions on three sumptuous brioche buns. Well, perhaps I got carried away with the bun concept. Adapted from the film of the same title by Billy Morrissette which was produced by Richard Shepard, Jon Stern and Abandon Pictures, Scotland, Pa the musical, currently running at Laura Pels Theatre Harold and Miriam Steinberg Center for Theatre is a take-off of William Shakespeare’s Macbeth. There are even three stoner witches whose marijuana-toking hallucinations serve as the powder-keg to turn sweet protagonist Mac into a reprobate rapscallion.

Like the film the musical loosely reconfigures the “Scottish Play’s” key characterizations, plot and themes against the backdrop of a sleepy town Scotland, Pennsylvania hamburger joint. Nothing ever happens there, and no one anticipates that in a decade outsourcing and Reganomics will destroy unions, winnow high paying factory jobs and attenuate American workers’ pay checks making the situation in Scotland, PA even worse. 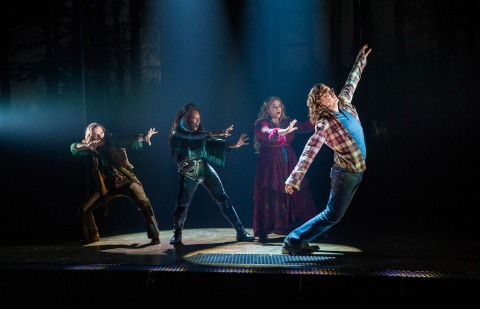 For in this backwater of Pennsylvania, the economy is already rust belt before outsourcing vanishes the nation’s industries. There is little opportunity for high school graduates except working at fast food hamburger joint Duncan’s owned by Duncan (a humorously overweening Jeb Brown). Duncan (unlike King Duncan in Shakespeare’s Macbeth) is a horrible boss, penurious, abusive and greedy. He shortchanges and mistreats his workers, just like the corporate CEOs today. That is about the most forward thinking thinking that Duncan accomplishes for his business where he is slothfully satisfied to dump on Mac (Ryan MCartan) Pat (Taylor Iman Jones) and their friend Banko (Jay Armstrong Johnson) and keep any and all profits for himself. A poor businessman, he will not reinvest or motivate his workers to help his business expand. 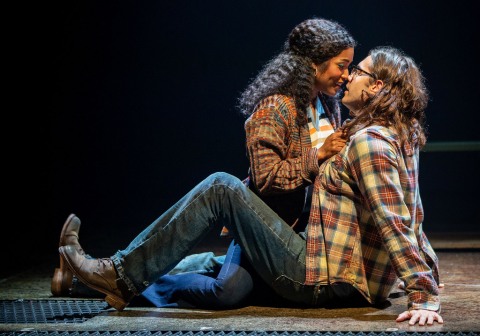 Beyond frustrated, Mac spurred on by ambitious Pat comes up with an incredible idea and presents it to Duncan who once again demeans and tortures Mac with insults. As a final “hurrah of hope” Mac proves that the manager is stealing, believing that Duncan will reward him with a raise and the managerial position. Instead, Duncan gives his uninterested son Malcolm (Will Meyers brings down the house in his song “reveal”) the manager’s position. Malcolm who would rather play football rejects his father’s offer and leaves when Duncan tries to teach him the business.

Throughout, hippie stoners Jessie (Alysha Umphress) Stacey (Wonu Ogunfowora) and Hector (Kaleb Wells) sing about the town and Mac’s situation and effect the wicked transition in Mac and Pat’s destiny toward doom. In an argument with Mac, Duncan ends up falling head first into the hot oil of the fryer, an incident which just skirts manslaughter. What prompted this? Duncan catches Mac and Pat stealing and their guilt prompts them to struggle against Duncan though his death is largely accidental. But crime begets crime: in the commission of their theft, Duncan dies, they pin Duncan’s death on someone else and use Duncan’s money to buy out Duncan’s from his son. As Mac and Pat step deeper and deeper into the evil foretold and instigated by the witches, the musical progresses toward more twists, an investigation and scramble to hide the truth in an ironic, black comedy conclusion which is also poignant. 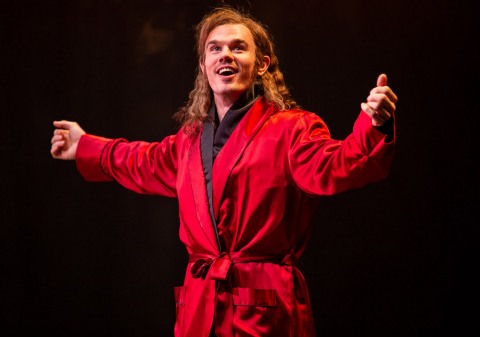 The surprises are many and the jokes are uproarious. The musical numbers are well staged and equally riotous and energetic. As Mac, Ryan McCartan is not only an adorable innocent turned miscreant, his vocals are smashing and his authenticity is spot-on in a role that one could make ineffectively campy which would have been a mistake. McCartan shines and we find ourselves empathizing with him as he stands up to detective Peg McDuff (the suspicious, inquisitive Megan Lawrence) and deflects her investigatory skills. Likewise, Taylor Iman Jones portrays wife Pat with sincerity and her voice is gorgeous. How can he not be loyal to her dreams and wishes though they include malfeasance?

Driven to seek a better life upward from their poverty, Pat motivates Mac toward with conniving subtly. The witches’ provocations spin and contort so that benign dreams morph into the nefarious and damaging, first with stealing the cash in Duncan’s safe then with manslaughter, then a cover-up murder. The crime dominoes fall and Pat is always there to “screw Mac’s courage to the sticking place,” as they enjoyably couple to commit even more dastardly deeds.

How Mitnik and Gwon transform a well-meaning, average, lower middle class husband and wife into thieves and murderers is humorous with all the stops removed. On the one hand, Jeb Brown’s Duncan is so loathsome, we are not surprised at the comeuppance he gets. His mistreatment of his workers, abuse of his son and arrogant insults and rotten demeanor drain all our sympathy upon his death. However, the black comedy deepens when investigator Peg McDuff comes upon the scene. Fear of discovery and the need to cover-up become the linchpins that send the “well-meaning” capitalists Mac and Pat right into hell with betrayal, murder and suicide. 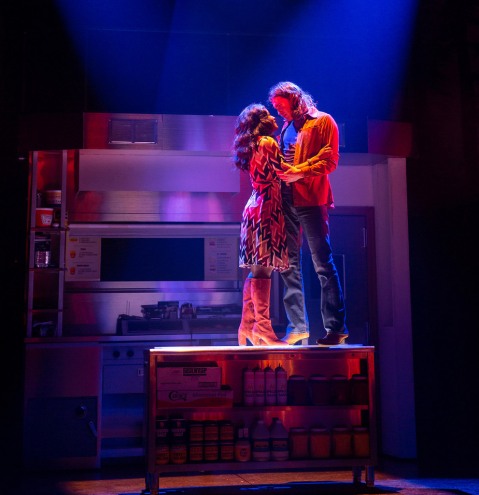 As their friend and foil Banko, Jay Armstrong Johnson is flat out marvelous in the role of the lame-brained, stoned out hippie who can’t get out of his own way. And Armstrong can do more than carry a tune; he has a show stopper number to boot. As with the others in the ensemble, his vocal power is prime. The surprise in his characterization occurs when he reveals he is more sentient than we imagine and actually is a threat to his two friends in blowing apart their alibi.

The arc of development moves toward a swift conclusion and the “bedazzled by wickedness” Mac fulfills the prophecy of the witches, despite himself. We are left with the themes: “the love of money is the root of evil,” “crime begets cover-up and more crime,” “overweening, unrestrained ambition destroys.” Each are their own moral lessons. At least in this bucolic town, ethics still abide and “crime doesn’t pay,” after all. Of course that is because Peg McDuff believes in serving justice, not serving herself or any corrupt cronies, unlike our present times. In this the play’s small town folkways and ethics are charming reminders of the past. Oh how long ago and far away this America was! 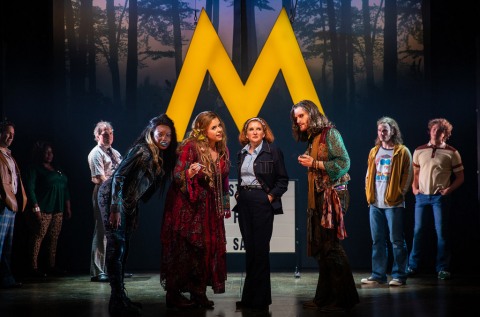 The Company of ‘Scotland, PA,’ directed by Lonny Price, book by Michael Mitnick, music & lyrics by Adam Gwon, adapted from the titular film by Billy Morrissette, based on William Shakespeare’s ‘Macbeth’ (Nina Goodheart)

Scotland, PA remains a lovable, smash hit worthy of seeing a few times for its sardonic humor and the ensembles’ masterful delivery of clever humor and pacing to full effect. The songs are not earth-shattering in meaning, but they are tuneful and effervescent. Everyone in the cast from the three stoner witches to Peg McDuff are focused. Their portrayals have been well shepherded by Lonny Price’s incisive, thoughtful direction.

Set design elements thanks to Anna Louizos are funny in the transformation between the Duncan’s of Act I to the spoofing of the real Ray Kroc and McDonald’s in Act II. From the thunderous lightning cracks to additional lighting elements created by Jeanette Oi-Suk Yew and accompanying sound design elements by Jon Weston, Scotland, PA’s tenor, mood and irony shift and change providing a fabulous medium to stir the actors to hit their marks! Likewise, costume design by Tracy Christensen and hair, wig & make-up design by J. Jared Janas combine elements of the modern and throwbacks to the 1970s. I loved the look of the witches. And the restaurant outfits in Act 2 are a hoot!

Music Direction by Vadim Feichtner, orchestrations by Frank Galgano & Matt Castle and choreography by Josh Rhodes help to make this a great entertainment. Bravo once and bravo twice for good measure to the creative team, Lonny Price and the ensemble of Scotland, PA.

The production runs with one intermission until 8th December at Roundabout, Laura Pels Theatre Harold and Miriam Steinberg Center for Theatre (111 West 46th St). For tickets and times CLICK HERE.