‘Ottolenghi and the Cakes of Versailles’ Tribeca Film Festival Review 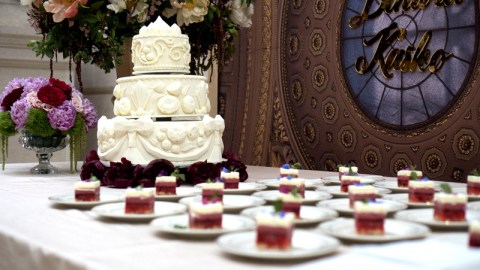 As COVID-19 has prompted the Metropolitan Musuem to close its doors to its thousands of visitors on a slow day and stream daily content, we have a chance to look back at another time. It is a throwback to the past splendors of the Met and its 2018 Versailles exhibit captured in a Tribeca Film Festival offering. Ottolenghi and the Cakes of Versailles, streamed online for press, fans and supporters. Tribeca Film Festival curtailed many of its events. However, they screened films in the midst of a global pandemic, the likes of which is perhaps worse than the French Revolution that felled the last of the French Kings (Louis XVI) and left the Palace of Versailles a shell of itself until later restoration.

Though I am a neophyte foodie, I had never heard of world renowned chef Yotam Ottolenghi (cookbooks include Jerusalem, Plenty). Nor had I the time to visit the Metropolitan Museum of Art in New York during its “Visitors to Versailles” exhibit:  https://www.metmuseum.org/exhibitions/listings/2018/visitors-to-versailles.

The Metropolitan Museum enjoys featuring live events which bring important works to life. They attempt to ground them in the present by combining exhibits with other contemporary forms of expression. “Visitors to Versailles” was one such glorious presentation taking place in the Summer of 2018. 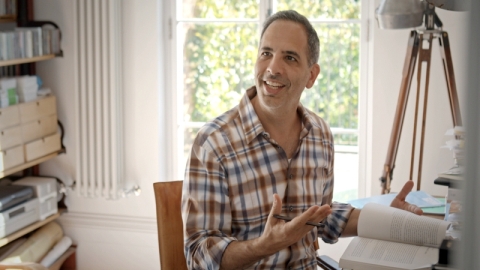 Though I missed attending the Versailles exhibit and particularly “The Feast of Versailles,” presented by Ottolenghi and his pastry chef collaborators, “all’s well that end’s well.” Laura Gabbert the documentarian known for city of Gold, No Impact Man and Sunset Story decided to do a quick and dirty film about Yotam Ottolenghi’s commission to create the “Feast of Versailles” giving us an inside look behind the scenes at how the “feast” portion of the exhibit came into being.

From start to finish, Gabbert chronicles the philosopher-foodie Ottolenghi at his home and his restaurant. We witness clips of him with restaurant colleagues tasting and refining desserts. We immediately get a sense of Ottolenghi’s expertise, congeniality and collaborative skills to perfect dishes to will please his clientele.

The filmmaker features brief interview clips o Ottolenghi describing how he works and how he responded to the Met’s commission of his culinary artistry. Then she the chronicles the chef’s visit to New York City from his home base in London and reviews meetings with Met Museum experts who assist him in his research of the culture, opulence and luxury of Versailles as the seat of world culture for over 100 years during the reign of the Sun Kings. Importantly, the Met experts discuss the types of foods that the king and his patrons enjoyed, gleaned from the records and from oil paintings of that time. 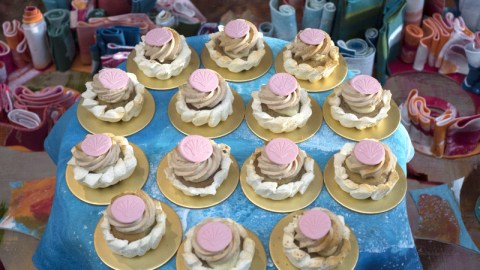 As Ottolenghi visits Versailles, Gabbart includes panoramic views of the glorious gardens and various salons and rooms including the “hall of mirrors” which she films as Ottolenghi comments. This section perhaps could have been added to; there is never enough photography of the incredible palace. However, film clips include the drawings, renderings and other works capturing the style of the palace dating back three hundred-fifty years.

From his readings, his discussions with the experts and his Versailles visit, Ottolenghi decides to review online a myriad of pastry chefs to assess whom he might best collaborate with who will convey his vision. It’s an important selection process. They will help him elucidate the ethos of Versailles though a contemporary lens. After visiting their websites and scrutinizing their “wares” online, he hones in on five visionary dessert chefs: Dinara Kasko, Janice Wong, Bompas & Parr, Ghaya Oliveira, and Dominique Ansel. All of these chefs are as diverse from each other as is the east from the west. 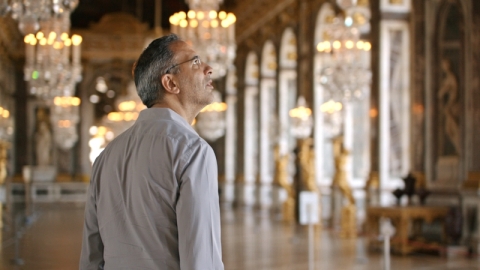 Ottolenghi’s research of French history and epicurean tradition, meetings, planning and contacts which have taken months are everything. Then Gabbert slows down her time frame and follows the pressure on the five chefs as they arrive at the Met to set up their displays and work their magic two days before the culinary event the “Feast of Versailles.”

These unique and renowned pastry chefs (creator of the “Cronut” Dominique Ansel, among others) have been guided with a light hand by Ottolenghi who has envisioned the evening as an emulation of French decadence that manifests spinning reflections into our own age. Months before the event, each pâtissier works to create a unique dessert inspired by the conceptualization of Versailles’ over-the-top dramatic grandeur. Chocolate sun kings to elaborate jellies, tarts to swans and topiaries — Gabbert reveals the artistry of the dessert chef and the challenges they confront fashioning their presentations in a formidable setting like the Met which is not outfitted as a culinary institute, indeed, far from it.

As the tension rises, the worst possible scenarios occur. The electrical circuit doesn’t work and it is a trial for the electricians to come up with a solution so that the “tornado” effect delivered by the special machine will spin with gusto. In another instance, the cake batter is not the right consistency because the ingredients in the US are different. The pastry chef tries numerous times with the help of an American expert who insists another ingredient should be added. The director wisely leaves the chef unmoored from her art, questioning how to correct the batter. Will she find a solution the day of the Feast?

Importantly, the “Feast” is a living paean to the court of the monarchy which daily was a staged scene that gave audience to artists, writers, reporters, foreign tourists and subjects who witnessed the rich splendor of the King’s residence, his dominance over his officials and his power as head of state. French cuisine then and now had a great impact on French society which continues into our modern day with cultivars like Julia Child, Eric Ripert, Dominique Ansel and more. One cannot examine a cookbook and not see French words used for process and product: i.e. saute, flambe, mousse, omelet, etc.

One theme that Gabbert explores is this idea that there is little privacy in the world of the Sun Kings who exposed themselves, perhaps too much, for it led to their downfall in the extremes of poverty and wealth. Today, Social Media is used to eliminate our privacy, but the uber wealthy manage to stay away from the public spotlight, where the Sun Kings sought it. The reputed richest in the world are not necessarily so; old wealth that dominates for centuries is unknown and uninvestigated, for good reason.

Another theme that the director alludes to briefly, which should have been elucidated at length, is the idea of excess, crass opulence and decadence. The director includes one shot of Donald Trump’s gold room and makes the analogy that such excess caves in on itself as did the French Monarchy. On a superficial level the “equivalence” seems to make sense. She  needed to extrapolate about the parallels and reveal that past their superficiality, there is no parallel. The Sun Kings were far from frivolous and unlearned. Their culture developed over a century and the accoutrements they surrounded themselves with were priceless. The same does not abide for the dim comparative currently in the White House and the occupants’ crass nouveau riche sensibilities.

What may abide in this romp through Versailles and the lovely feast of extravagant and clever desserts is the theme that the draining wealth and riches it takes to sustain the luxurious materialism chokes off everything. Eventually, the debts pile up and the enemies threaten. Soon the borrowing becomes so great one is entailed with quid pro quos, not a way to remain autonomous. And then the revolution comes when there is not enough food to go around. The film is an interesting view of the days of glory during a time when new elites strive for similitude but fall so short, they don’t recognize their foibles and pretensions.

But Gabbert manages to tie the times vaguely together with the elaborate desserts and concepts of the grand master of the “Feast of Versailles,” Ottolenghi. And she infers gently that the sustainability of such excess is as mortal as its keepers. We recognize the fragility of excess more than ever in this COVID-19 global pandemic.