Jonathan Pryce as Davies and Alex Cox as Aston

BAM, is Brooklyn Academy of Music. It is Brooklyn’s premier showcase for productions which do not mirror the crass commercialism  and faux quality of Broadway’s double digit IQ spectacles, excepting (A Streetcar Named Desire, Death of a Salesman, Seminar, The Best Man, Other Desert Cities, Leap of Faith superb, standout shows that I have seen this year) In addition to superlative global productions mounted by the Bridge Project (Kevin Spacey and Same Mendes’ American/British collaboration of touring works by Shakespeare-this year’s Richard III starring Spacey) and other global offerings from Russia, Australia and the United Kingdom: The Three Sisters, John Gabriel Borkman (with Alan Rickman and Fiona Shaw) and Gogol’s Diary of a Madman (with Geoffrey Rush) the season presents interviews and talks with cast members after performances.

This year I was blessed to see live sessions with Declan Donnelan, John Hurt and the cast of The Caretaker (see review) Jonathan Pryce, Alan Cox and Alex Hassell. These are precious gifts. I try to take advantage of the live sessions because the actors, after having expended their souls onstage, graciously share the remainder of their energies even though they must be drained of all emotional heft.  It is their act of love and the celebration of an art form that will never die because it IS the reality show and anything that can happen will happen during a live performance and dealing with it is electric. I am there to celebrate with them.

Amazingly, each time (John Hurt, Alan Rickman, Fiona Shaw, et. al, Geoffrey Rush) after their performances, the actors have appeared as fresh as moments ago picked corn, carrying their great good will and humor with them despite the grind. I find that my love for live theater and appreciation of BAM has been strengthened each time I’ve stayed for discussion, so  upon leaving, I secretly nod a special thank you to Dionysus, the patron of all great theater.  Whenever I lust for an apartment in Manhattan, I think of BAM, the Hamptons and the US Tennis Open, locations which are  très inconvenient for Manhattanites. I am  thankful that I live in the second most fashionable section of Queens, artsy Kew Gardens and am to be envied: I have a car…HA, HA, HA, a wonderful perk that makes up for being estranged from Manhattan’s living spaces. 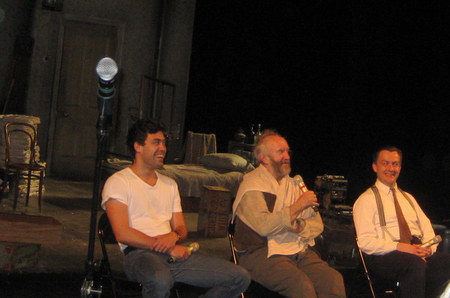 On Thursday, May 24th, Pryce, Cox and Hassell managed to recoup from an incredible performance to face their worshipers (they received a lengthy standing ovation). How did they do it? I guess it was “The show must go on,” because many actors, Philip Seymour Hoffman, Angela Lansberry and James Earl Jones eschew this kind of thing. But the Brits are level headed about their theater, unlike some American celebrities who might be too incredibly shy, Method, wiped, or self-adulating to scrape the will to expose themselves for who they are in their own skins. With their long tradition of theater and Shakespeare who lived “in the midst of the common folk,” Brits and Aussies are notoriously self-effacing and unselfconscious when it comes to meeting fans. I wish that more American “celebrities” and/or actors were that way. That’s insecurity for ya.

As obtuse as the play can be if not acted superlatively (it was) this talk back was revelatory and insightful. Each of the actors reaffirmed the importance of living onstage and adhering to what was in the script which told all in telling little. Pryce had been with the production longer than Hassell and Cox and had even played the character of Mick in a 1980 production in England; he twitted Hassell that he was very good as Mick, garnering a laugh from the audience and a smile from his fellow actor. Pryce’s humorous touches were a pleasant surprise, but then his range and versatility as an actor spans The Comedians (1977, Broadway, a Tony) The Engineer in Miss Saigon for which his brilliant and controversial performance won him a second Tony (1992), to Lytton Strachey in Carrington, (1995) for which he won the Best Actor award at Cannes. Most recently he has played the governor in the three Pirates of the Caribbean films and began his scary, evil renown with the devil character in Somthing Wicked This Way Comes (1983). He was so convincing as Juan Peron in the film Evita with Madonna, I forget it was Pryce.

Pryce discussed the romanticism of the Davies character when Pinter first conceived of the play in the 50s. He is the tramp who lives like a gypsy wandering the roads and sleeping under the stars: perhaps representing every settled man’s hunger for freedom. But in the current times of harsh economies, foreclosures and rampant homelessness in cities across the globe, the actors upgraded the pressure each of the characters faces. Pryce said that the Davies character’s dark and desperate circumstances (the antithesis of the romantic, carefree tramp) framed Pryce’s internal emotional choices. And all of the characters at one point or another echoed that the play has taken on a darker meaning in our age of creeping poverty, political vapidness and lack of will to correct the gross inequities of wealth and power between and amongst economic classes.

At a  prompting from moderator, Professor Quigley, Pinter scholar at Columbia University, Pryce shared his experience and remembrance as a child visiting his father in an institution like the one where Aston was committed. Pryce recalled his fears walking down long, silent corridors locked at each end, hearing the keys jangle in the door as the aides unlocked each door and relocked it. And when he saw his father in a bed with rows of beds around him filled with other men, he was afraid; it was a terrible emotional experience. He said he used those feelings to frame Davies’ character in part, because Davies is perhaps as mentally unwell as Aston is. “He says the craziest things,” said Pryce smiling and perhaps he could indeed end up in such a place (though nowadays, the shelters have become the even more dangerous institutions of the insane. It’s afer on the streets.) Pryce reaffirmed that in the laughter (Character interactions both times I saw the play drew audience laughs.) or the light, there is the darkness. In other words, as we laugh at the ridiculousness of the characters and situation, there is the fear, poignancy and knowledge that we are seeing the truth of ourselves.

In the question and answer sessions, Pryce was equally generous. Davies’ cries and angst-driven dreams that awaken Aston, Pryce said were triggered by memories of Pryce’s daughter who talked in her sleep when she was under stress and of course, was upsetting to him. And when one audience member in the question and answer session suggested that he was pushing for laughs, Pryce handled the insult beautifully, first pretending to ignore the man and then quipping they needed “get rid of him.” He then dealt with the idea of “pushing” as an actor not being something that serves the actor and his colleagues. However, having seen the play twice, I affirm that the play’s sentiment and revelation would have been completely lost if any of the actors, especially Pryce were untrue or “going for laughs.” Pryce found the emotional resonance to convey Davies’ desperation, his wants, his wounds, all unconscious to Davies, but visible to us through Pryce’s massive acting instrument.

Alan Cox as Aston in the question and answer session discussed the importance of following the action of the play which specifically states what each of the characters is doing. To keep the interactions fresh each night, Hassell, especially did not want to know how the others were interpreting something, because the characters don’t know this. Uncertainty reigns; unexpected reactions rule. It doesn’t inform the actor to be gummed up with extraneous interpretations upon interpretations. Cox did respond that inviting Davies in, Aston is generating a random act of human kindness, nothing more. What evolves is human dynamic, power struggle, spontaneity, craziness, because that’s who these people, especially Davies are. We catch glimpses, as we catch glimpses in life, never knowing for certain, never stating something is forever. It is constantly a state of flux. When Quigley quoted that Pinter said you shouldn’t necessarily believe everything that Aston says in his long monologue about being committed, Cox’s reply was wonderful, THE QUINTESSENTIAL superb actor’s reply. Well, I believe what is in the script. I believe that what Aston says he experienced, he experienced. And Hassell echoed those sentiments. To pin down an interpretation of Mick’s intentions is pointless. The more one attempts to convey and pin down one specific interpretation, the less real, the less dynamic the less comprehensible the character.

After their sharing with us, I understood why this production is so outstanding, so brilliant, clearly the best of Pinter I have ever seen done, and I have seen deadly, boring Pinter. And I have heard that when Pinter attempted to direct, there was too much of a “going for a result,” a stepping out to convey a particular theme. In this production, there was none of that. Because in life, we are not interpreting our roles and actions as we go along. WE LIVE THEM. WE ARE THEM. WE ARE FEAR, DESPERATION, HOPE, LONGING, WANT, NEED. We don’t editorialize about how this action can be interpreted this way, except in hindsight twenty years later when we realize what we were doing. If that indeed is what we were doing because hindsight has its own reality.

The shifting light and dark, truly, as Pryce said, creates our understanding, my understanding, for we are all different, and I walked away with different values and perceptions because of my background as did every individual in the audience. The actors respected the work and their talents to bring life to the stage. And they are so incredible, I imagine they are able to do this for the rest of the performance schedule until June 16th when the final curtain of The Caretaker falls. Well, I for one am gobsmacked I’ve seen such magnificence. What a joy.