Chris Botti, Master Trumpeter and his Band at the Blue Note NYC. 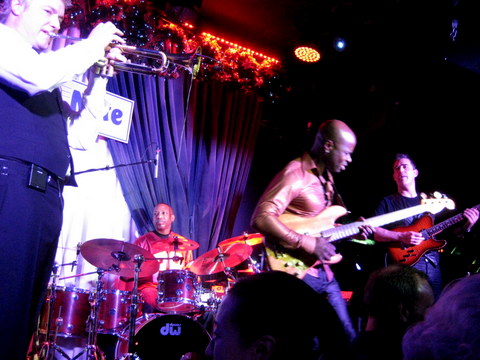 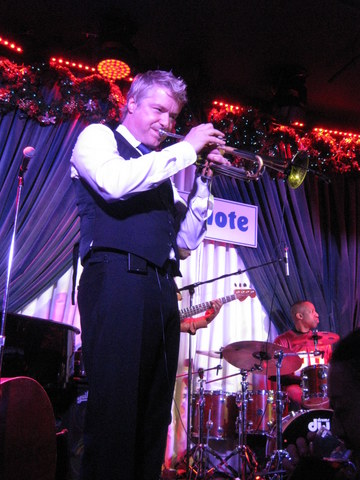 Chris Botti with Billy Kilson on drums. First part of the show on January 6th

Whenever I see Chris Botti and his band at the Blue Note Jazz Club (NY) or at the Tiles Center in Westbury, Long Island, at Tanglewood, at Carnegie Hall or at the Saratoga Jazz Festival, venues where I’ve seen him perform live over the years,  I’ve enjoyed watching the surrounding audience members. They are a pretty inclusive demographic bunch and their enthusiastic response always reminds me that timeless music resonates with most individuals, regardless of age, race, sex, even musical preference. Sure, we all have our favorite music styles. But some musicians are so exceptional in their craft and talent, that their technique bridges the great or lessert divides between jazz and pop, rock and classical, funk, hip-hop and blues. 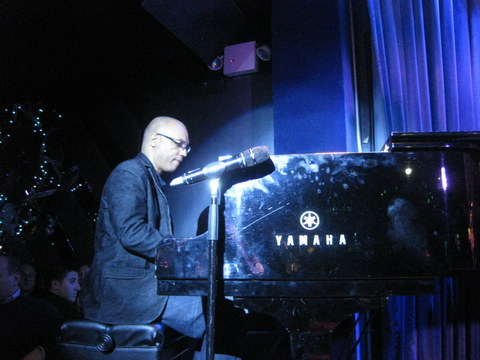 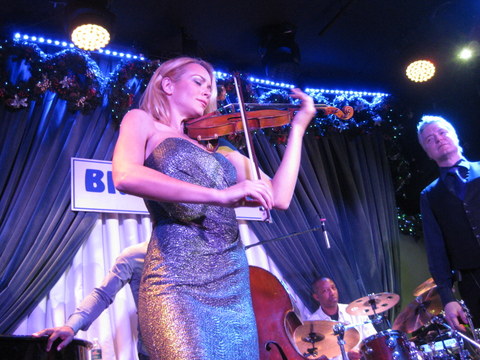 Caroline Campbell opening the number before Botti joins her in their duet playing Emmanuel. 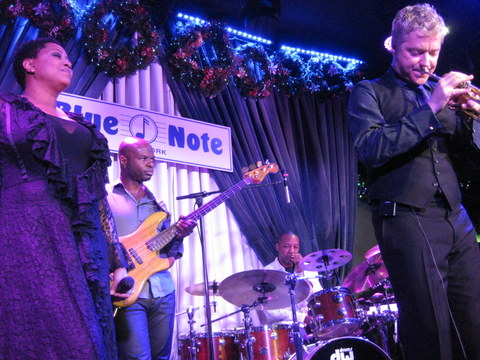 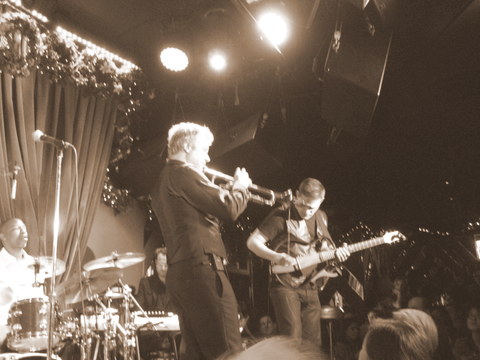 Trumpeter extraordinaire, Chris Botti, at the top of his game is such a musician. What is interesting to me about Botti’s evolution during the time I’ve become familiar with his music (last 6 years) is that it is as if he has been seamlessly breezing from opportunity to opportunity, never looking back, never taking a pause to reevaluate where he is and where he intends to go. He is just on his way and there’s no stopping him. 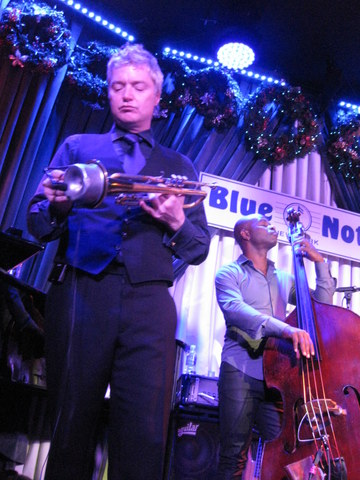 Digging the music as he attaches his mute. (December 27th) He asked his tour manager to bring his mute on Jan. 6th…he had left it upstairs in the Blue Note’s musicians’ lounge.

This dedication to craft is what appears to fuel Botti’s development. Certainly that and his work ethic have enabled him to move away from the stylistic niche where he began, perhaps to the chagrin of other musicians whose choices directed them along  very different paths.  However eclectic his music has become, touching upon everything from classical to pop to blues to jazz, in a melding fusion, it is his brand, his identity of being true to himself, that makes Botti a celebrated trumpeter with a global  following. I would imagine in the next five years, he will be pushing the envelope and finding himself in places where even he will be amazed he has reached. 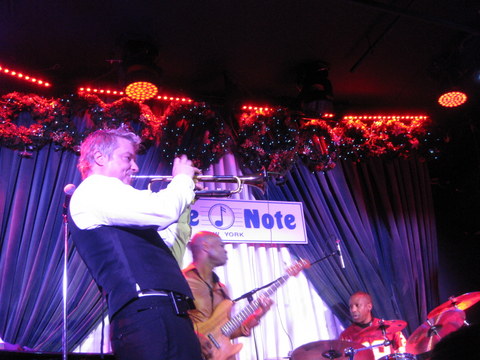 Chris Botti has been growing this world wide renown since having signed on to Columbia records in 2001. His work with Paul Simon, Sting and other artists like Michael Buble, Andrea Bocelli, Josh Groban, Yo Yo Ma, Steven Tyler, et. al., and recently Barbra Streisand, has increased his star power exponentially and garnered millions in record sales. He has won various awards and three of his albums made it to #1 on Billboard‘s jazz album chart. He has been nominated four times for Grammys, twice for albums Italia and In Boston. His latest work, Impressions, which has been nominated for a Grammy in the category of Best Pop Instrumental Album is an eclectic mix of jazz, pop and other genres including music by Chopin, Gershwin, Harold Arlen, R. Kelly, Randy Newman, others and a pair of songs co-written by Botti with Herbie Hancock and David Foster.

An integral part of Botti’s shaping his music is his incredible band with whom none of his evolution would have been possible or sure. For example in his 8th year performing at the renown jazz club The Blue Note (also in Milan, Tokoyo and Nagoya, Japan) the incomparable Billy Childs and Billy Kilson are Botti’s bedrock foundation.  They have been with the Botti for years and have their own fan following and careers. Likewise, other band members have whirled in and out of Botti’s sphere, spinning their careers toward other venues for a season, like violinist Lucia Micarelli who, after an injury on tour with Botti, took time off to heal and ever since has been acting in HBO’s production about New Orleans after Hurricane Katrina, Treme. 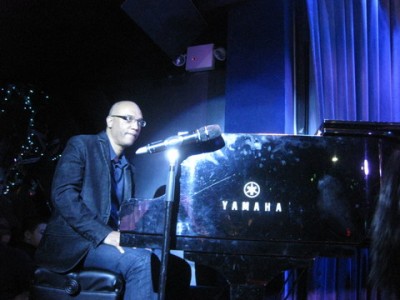 Billy Childs listening as Botti discusses their welcome residency at the Blue Note.

Current band members who performed with Botti at the Blue Note for three weeks, 42 performances (two shows a day) also have toured with Botti up to 300 days of the year, unless other commitments took them away for a time. Lisa Fischer joined her old buddy Mick Jagger when he took The Stones on tour for six weeks and Botti had to make do in her absence.

Yet for those who tour with Botti, the Blue Note residency is a welcome respite. First and foremost in the band is Guggenheim fellow and three time Grammy winner, pianist/composer/arranger the phenomenal Billy Childs. Next is Mr. Awesomess, kick-ass drummer Billy Kilson.  Amazing vocalist, Grammy winner and Rolling Stones singer for 18 years,  Lisa Fischer has an operatic voice range, musicality and technique bar none. The virtuoso concert violinist Caroline Campbell, the youngest person to be inducted into the Pittsburgh Jazz Hall of fame, bassist, Richie Goods and versatile world renown guitarist Leonardo Amuedo have contributed their own unique talents and have enabled the group to soar on new wings. 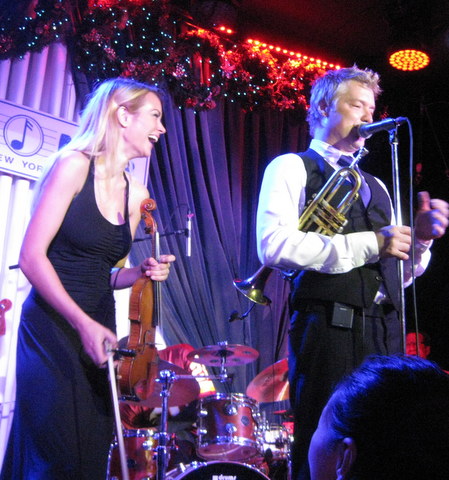 Botti making an ironic joke in response to an audience member’s comment about Caroline Campbell’s beauty. 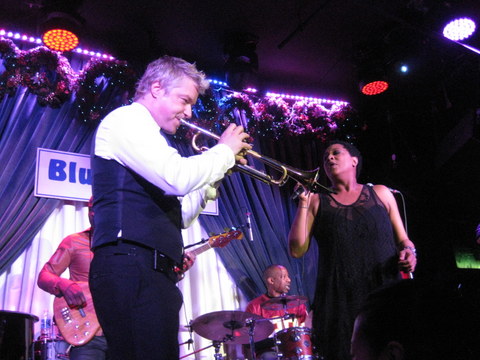 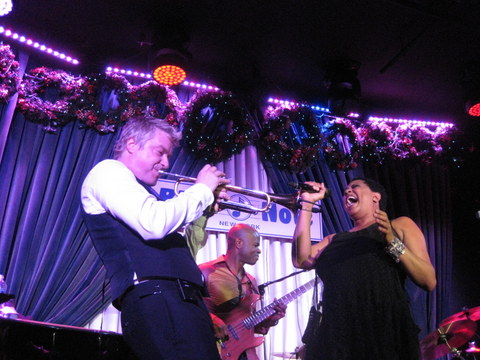 Check out Botti’s website and the websites of band members Billy Childs, Billy Kilson, Lisa Fischer, Richie Goods, Leonardo Amuedo and Caroline Campbell for updates on performances and music albums. And be sure to watch the Grammys in February. After being nominated a number of times, this may be the year Botti takes home the gold.

Posted on January 12, 2013, in NYC Download. Bookmark the permalink. 3 Comments.