← Alan Cumming’s Macbeth, Not Shakespeare’s, Currently on Broadway!
Lucille Lortel Awards: My Predictions for Some of Off Broadway’s Best →

The Testament of Mary. Why Protest This Tony Nominated Production? 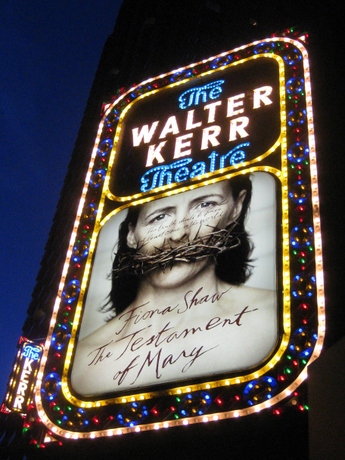 I saw The Testament of Mary starring Fiona Shaw a few weeks ago. It was the opening night of the previews and as I walked up to the theater, there was a huge commotion on the opposite side of the street. Members of  a branch/sect of the Catholic Church were protesting the production. It reminded me of the protests for Martin Scorsese’s film, The Last Temptation of Christ which was in theaters for a brief period and then scuttled away in shame, quickly forgotten. 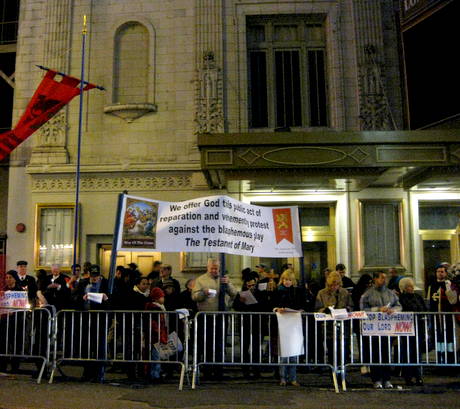 That was a travesty. The Last Temptation of Christ is a brilliant film, stirring and iconic in its imagery, thought provoking and incredibly spiritual. What other film about Christ so aptly deals with the realm of carnality in Jesus Christ’s human side? The fleshly, carnal nature is something the Catholic Church seems to have a huge problem with and as a result, certainly should have encouraged their membership to see the film and learn HOW TO THWART FLESHLY TEMPTATION. They were too afraid what the film might reveal to them, apparently, and like ostrich’s, put their heads in the sands of protest and the studio and distributors backed down, so the church prevailed and didn’t see the film. Ironically, in the years that followed, more of their membership and clergy committed acts of carnality and submitted to fleshly desires. If they had seen the film, it may have been an expurgating and healing experience.

With these thoughts in mind, I took pictures of the protesters and wondered if the same fate would befall The Testament of Mary, as it did Last Temptation, a brief run, sparse audience, excoriation, hell and condemnation.

After seeing the production, I thought the run might be longer. This is 2013. The Catholic Church’s credibility is plummeting into the abyss, self-damned with the exposure of its abusive  clergy, nuns, et.al. and the wide swath of deceitful cover-ups of the abuse.

The play doesn’t have a wide release like a film and can’t be widely protested; this is New York City, and the play could draw an amazingly tolerant, urbane, thinking audience, albeit it is not a fluffy, touristd musical.  Turns out for whatever reason, most likely money, the production which has been nominated for a number of awards, including a Tony for best play and a few other lesser categories, the play is shuttering on May 5th, in four days. I urge you to see it, especially if you are a person of faith, Catholic, an atheist and/or an agnostic.

A bit of comparison between the Scorsese film and this production, because thematically, they are similar. Both uplift faith and in no way deny the deity of Christ and the spiritual purpose of Mary. What they do reveal is the tremendous humanity and fleshly temptations of Christ and Mary, Jesus’ mother. Both represent the scriptures to a fault. How the Catholic Church could protest such revelation of the humanity of Mary and Jesus is beyond my comprehension. It is with the humanity that we inevitably identify. God? He is far from us. Only through Christ, Mary, Paul and the other very human disciples do we comprehend how to grow into a more loving, compassionate and empathetic nature. If they did it through faith, belief and prayer and forgiveness of self and others, then perhaps we can begin to relate and improve our lives and the lives of those we touch.  As they were subject to failure and temptation, even to doubt, then we can relate our very humble existence to theirs. Both the play and the film highlight their humility, above all, very much in keeping with scripture. 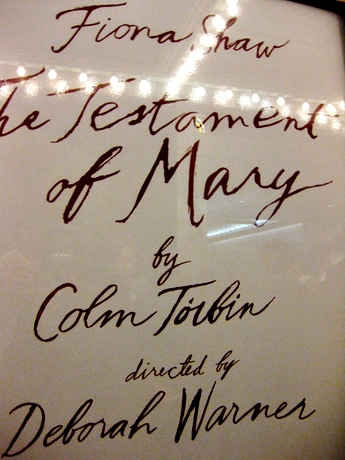 Colim Toibin’s The Testament of Mary at Broadway’s Walter Kerr Theatre stars Fiona Shaw and is directed by Deborah Warner.  Based on Toibin’s novella of the same name, The Testament of Mary tells the unheard story of Mary, the mother of Jesus, who is being guarded and protected in the city of Ephesus after her son’s Crucifixion. The one-woman performance will have played 27 previews and 16 performances when it closes May 5th.

Before the play begins, Mary dressed in an iconic blue drape is behind a glass case, the very picture of the mother of God depicted in paintings. Under glass, she is the somber woman deified for all time. Mary under glass recalls tacky lawn ornaments. As the figure of Mary with plastic flowers Shaw poses and prays reverently, an emblem of the religion removed from humanity. While Shaw is behind the glass case, the audience, if they like, can go up on stage and view her and walk around. Also, present on stage is a chained up (so he won’t fly away) turkey buzzard, a predatory bird referred to later in Mary’s testament about the events leading up to the crucifixion. She refers to seeing a bird of prey gouge out the eyes of a rabbit and then eviscerate the animal, killing it in blood and gore. In context, it is what is done to Jesus, her son, which she laments and wishes had not happened.

The play begins after Shaw comes out from under the glass and becomes the human Mary. She takes away the bird of prey and begins her story of what happened to her, to her son and her ultimate lament that she wished it had not, a very contrary view, not to the Bible, necessarily, but certainly to the Catholic portrayal of Mary as the iconic wonder woman who birthed God.

Throughout the testimony, we do not see or hear the exultant Mary happy her son is the savior, an all-knowing Mary who understands flawlessly and effortlessly without a smidgeon of doubt her son’s purpose. This is a human Mary, filled with doubt. As she recounts the story in flashback, she laments as she tells us she had seen the “writing on the wall” when Lazarus was raised from the dead. She knew the envy and jealousy of the religious leaders. She knew they would go after Him because of the miracles He performed. This human Mary is fearful for her son because He is too loving, too kind, to wise, too beautiful, too knowledgeable and too just. And she intuits that He will be killed for it all especially because of His fan club and followers’ love.

The rabbit eviscerated in gore is her son eviscerated and left bloody. She doesn’t hail the blood of Christ as that of the lamb slain for the world that the religions (Christian) rejoice about. She rues his blood shed. He is first and last her beloved human son. All the more poignant is the scripture of Jesus when he looks down upon Mary from the cross, saying, “Mother, behold your son.” For Mary, it is a great sorrow that her innocent son went to His death, for what? Not even Pilot wanted Him dead, and in fact was warned by his wife not to “kill that innocent man.” How much more a mother suffers when her son is destroyed for what she knows is jealousy and envy. She knows the price  that her son will have to pay to heal, cleanse, comfort, make water into wine, and especially to raise from the dead. She knows that the religious leaders will punish him and exact a blood penalty. She shares what motivates her son and what motivates the religious leaders who put burdens on the people that they themselves cannot relieve. She knows her son is the “real thing,” and that they, motivated by greed, money and power will destroy him. Her son’s death is not salvation; for her it is torture.

Can Mary the “mother of God” be allowed to speak as a human mother when she is  portrayed by some religious leaders (Catholicism) as even greater than Jesus? Is it fair that she be human, that she show fear and run away like Peter who denied Christ? Is this not blasphemous? And yet in the scripture, she mourns and grieves her son as the women and disciples did. The production is not contrary to the scripture, even with regard to the resurrection of Christ.

So what’s the fuss? Fiona Shaw is absolutely brilliant, touching, painful, monumental in her portrayal. The play taken from the scripture is electrifying. Mary was indeed human and she is divine. We are human and have the potential to achieve great goodness, perhaps even divinity counting a few miraculous prayers answered. What the play intentions through the beauty of Shaw’s cry of humanity is that the divine be brought into our reach and that we identify and become ennobled by this understanding. That we too, given the concept of world salvation by a son, would rather have the son with us…forget the world. Let it rot. All the more the sacrifice, was Christ’s to have been paid at such a great cost: the suffering of a mother who, knowing who her son is and understanding what He can accomplish must lose him to brutality, jealously, all the sins of the world? No wonder Mary’s lament; no wonder she disputes God’s purpose. No wonder she questions and wishes a reversal of events. Wouldn’t we? And isn’t that the point?

But as in The Last Temptation of Christ, there is no going back. Christ defeated temptation. His work was finished on the cross and He fulfilled God’s purpose. And likewise, Mary may rant, she is human, but her rant too is finished. And though she is an icon, Mary lives and prays in Spirit. Nothing can be taken from her nor is it in this production. The beauty is in the addition of her wonderful humanity in the paradox of divinity. There is hope for us yet.

Posted on May 1, 2013, in NYC Theater Reviews. Bookmark the permalink. 8 Comments.

← Alan Cumming’s Macbeth, Not Shakespeare’s, Currently on Broadway!
Lucille Lortel Awards: My Predictions for Some of Off Broadway’s Best →