← The Testament of Mary. Why Protest This Tony Nominated Production?
Drama Desks Sunday, May 19th. Will Winners Overlap With Lucille Lortel Winners? →

Lucille Lortel Awards: My Predictions for Some of Off Broadway’s Best 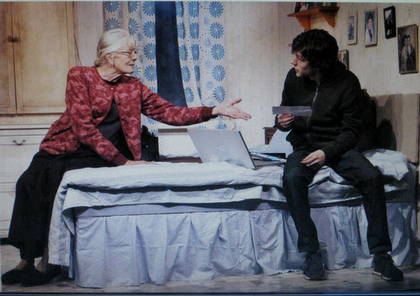 Vanessa Redgrave and Jesse Eisenberg. Redgrave is up for a Lortel Award.

Tonight Off Broadway receives its day in the sun. Some of the finest theater resides Off Broadway in smaller houses whose productions are less costly to mount. If a big name is attached to an Off Broadway production, all the better. This year, Vanessa Redgrave, Jesse Eisenberg, Jack Gyllenhaal and America Ferrera, renown for nominations and/or wins for sterling performances in other entertainment mediums acted in productions in the Village or in theaters away from Broadway central. We are blessed that they have given their support to these smaller venues, their name recognition helping to draw investors to risk their money on productions we might never have seen performed anywhere.

Though I was not able to see many of the productions, amongst the ones I did see, I do have my favorites. Will they win a Lortel Award? Well, they do have my vote. For Outstanding Play, amongst the picks three women playwrights offered their brilliance to the five nominated plays which you can find online: HERE. My vote was between Bethany, produced by the Women’s Project Theater and written by Laura Marks and Detroit produced by Playwrights Horizons and written by Lisa D’Amour. If either play receives the Lortel Award, I’ll be thrilled.

I did not see any of the musical productions, though I was tempted to and may still see Murder Ballad, which I heard friends rave about. I just couldn’t fit the production in my schedule. As for Outstanding Revival, I have two favorites, Signature Theatre productions: My Children My Africa written by Athol Fugard and The Piano Lesson written by August Wilson. Both were directed by Ruben Santiago-Hudson and I had the opportunity to go to the talk backs for both shows with Santiago-Hudson and the cast which were fascinating. However, I particularly thought The Piano Lesson was one of the finest, most alive, thrilling productions of August Wilson’s plays that I have seen in the last few years, even more phenomenal than Fences with Denzel Washington which I loved. So for me, The Piano Lesson blows away the rest of the competition and should win the Lortel for Outstanding Revival and Direction. Ruben Santiago-Hudson worked wonders in marshaling and inspiring his actors, Brandon J. Dirden (up for Outstanding Lead Actor) and Chuck Cooper (Outstanding Featured Actor) and Roslyn Ruff (Outstanding Lead Actress) to come alive onstage. I was drained and uplifted by their performances and the unforgettable production. Marvelous.

For Outstanding Lead Actress, I did see four of the performanes. Nominated are Quincy Tyler Bernstine for Neva, America Ferrera for Bethany, Vanessa Redgrave for The Revisionist, Roslyn Ruff for The Piano Lesson and Sharon Washington for Wild With Happy. I must say that it is very difficult to make any basis of comparison and all the actresses were exceptional. I thought Quincy Tyler Bernstine’s portrayal as Chekov’s wife was ironic, tempestuous, feeling and humorous. Roslyn Ruff was anointed in her portrayal; her exorcism of the demons which plague the family electrifying, acute, spiritual. Hers was the pivotal role around which all the other characters weave and she commanded turning with grace and subtly.

However, my favorite performance was Vanessa Redgrave’s for the old Polish woman harboring a secret which she attempts to keep even from herself, in The Revisionist. Given my proclivity for annoyance with Rattlestick Theater Company who mounted the production, I was not easily persuaded into enjoying the play’s brilliance, depth, and austere themes. Redgrave and Eisenberg were wonderful together, a great union there. I was particularly touched by Redgrave at the end as she so completely conveyed the gravitational pull of her character away from human love and connection: her necessity to remain alive and paradoxically remain numb and emotionally dead danced in a somber interplay, something only a truly accomplished and talented actress could execute without undermining the truth of her being onstage. Redgrave’s sensitivity was amazing and she conveyed this great pain-filled void of her character with great beauty. The result was Greek Drama: catharsis and empathy. An “Ahhhh.” moment.

A few words about If There is I Haven’t Found it Yet. I was happy that Jake Gyllenhaal performed in live theatre taking a tremendous risk to stretch his acting gifts. His presence and the lower cost of the venue brought many younger audience members to see the production and though it is a debatable concept, in this instance, many of these twenty-somethings probably would not have come to see the production otherwise. It is unfortunate and fortunate that he is competing with Chuck Cooper in The Piano Lesson. Both were so creative and so unique and alive and felt. They are both favorites of mine. I do think that Gyllenhaal will receive the award because his stature coming from film might be considered a vital and necessary promotional spur to bring publicity and celebrity to Off Broadway.

It is a time when the artists, actors, directors in the NYC theatre community long for repertory companies, long for sure venues to mount experimental, innovative productions, long for alternatives to the grind of finding investors and being told, “No it can’t be done!” Over the last decades the Philistines have forced belt tightening in the extreme. Only love and obsession for live theater drives this artistic community to commit to creating the unique theatrical experiences. Their hunger for money does not, not that the lure of riches ever drove brilliant artists and art. Yet, it is an exciting time. It is a time when shifting paradigms and mega social media and the internet threaten the way things have been done for decades. Thus, the Philistines are being attacked on all sides, and I do think if the young are able to capitalize on this, theatre WILL OUT because those from the old paradigm are confused and disconcerted at the loss of market share. They will be forced to listen to innovators and youthful-minded integrators to compromise and use the new medium to massage theatre into a new era.

Will the arbiters of old entertainment media learn how to embrace new trends in the new paradigm? (For example, using social media during performances to promote and create interest about the productions. No folks. It isn’t distracting if you are not in the first three rows. That is a myth perpetuated supposedly to keep control of revenue, when it actually prevents revenue. And where are productions’ Twitter/Tweet and FB teams?) I don’t know.  I do know that this concept rules investors:  celebrity names give credibility to live theatre and bring revenue (the costs also drive the younger crowd away and hamper revenue) by drawing a larger audience. (This is debatable. The greatness of a production is what draws. Well placed and thought out social media strategy can help, but it hasn’t been used to any well meaning extent.) We will probably see more of this (currently Tom Hanks is in Lucky Guy) until traditional, old paradigm threads into new paradigm and the shift is made.

The Signature Theatre has received the funding to take a modicum of risk in its selection of performers by highlighting established and upcoming playwrights. They select playwrights (some living) in residence (Hwang, Albee, Katori Hall, Fugard) and directors like Ruben Santiago-Hudson have followed through with their verve and creative energy to put on interesting and brilliant productions. That is what we need more of. We also need to see more renown film actors taking risks Off Broadway, like Gyllenhaal, though of course, for them, the work is tantamount to doing pro bono. For that reason, I think Gyllenhaal will win, though I do think that Cooper was astounding. However, this is Off Broadway. You never know.

Finally, I do know that Annie Funke will win for Outstanding Featured Actress in If There is I haven’t Found it Yet. She played the obese teenage family member set adrift in familial landscape of oblivion and negligence, where all except her uncle (Gyllenhaal) are drowning. (see my review) Her performance was without parallel. If she doesn’t get the Lortel, I’ll be pissed. Will keep you posted as to whether my favorites and those of the voting members of the Off Broadway League jive.

← The Testament of Mary. Why Protest This Tony Nominated Production?
Drama Desks Sunday, May 19th. Will Winners Overlap With Lucille Lortel Winners? →