A Family for All Occasions. A Labyrinth Theater Company Production 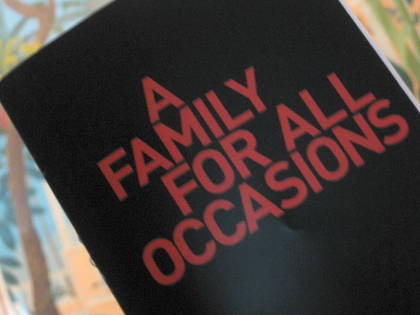 A LABYrinth Theatre Company production at the Bank Street Theatre

I thought that A Family for All Occasions, at the Bank Street Theatre (It’s run is completed.) was well acted and directed, but missed the mark with regard to a number of areas in the play that were obviously drop dead contrived.

The actors, with the help of the director, Philip Seymour Hoffman, managed to overcome this as best they could, but the dissonance still crept through. Jeffrey DeMunn held the piece, the family and the ensemble together beautifully. He tempered his portrayal of Howard well: always striving for goodness yet receding from it at various junctures, especially at the climax when he takes out the baseball bat and begin a smash riot. DeMunn’s performance was sustained, real and alive. (His character was also the one most fleshed out by the playwright.)

Deirdre O’Connell’s attempt at portraying her character’s neurosis and anxiety was one note. In the second act, when she is finally retiring from her job (The action of massaging her feet works beautifully.) she is somewhat humanized. At that point she was more believable and relaxed, helped by that simple massaging action. Her acting choices were not spot on; she pushed as a termagant, hollowing out the character’s substance instead of making choices that revealed layers to May’s underlying angst (not just about the job) and unhappiness. The actress cannot be expected to perform miracles; this portrayal fell down in the writing and the direction also.

Due to whatever, there was a problem with her characterization as there was in the relationships between and among the characters. I thought the relationship between Oz and Sue was too convenient; black man willing to do everything for this family. Oz is portrayed as Mr. Wonderful and Sue the convenient foil, a vapid, lost, presumptuous, willful blonde, demonstrating no redeemable inner characteristics (beyond attempting to find herself). The actress, Justine Lupe was remarkable and dealt with the stereotype as best she could; too bad the playwright didn’t give the character depth and substance. The character is so thinly drawn: how convenient she was orphaned by her mother who she might rather believe killed herself. How convenient she connects with no one, not even Oz and demonstrates utter selfishness. Where is her humanity, making us believe she is worthwhile? Sue is miserable before she meets Oz, but the misery is only relayed by her restlessness as a fluttering creature  who never lands. Again How convenient is the playwright’s characterization as the contrived: I’m young and I can be rebellious and this baby is tying me down. (Humans have souls, spirits and complexity. This was not even etch-a-sketched in the play.)

This surface portrayal makes her a characterization device to set up the plot as was the characterization of Oz, as the hero. Both are needed to bring in the baby, create some conflict and move the play along. There is no rational explanation given as to why, selfish as Sue is, she does not get an abortion on her own. We do not see the development of Oz’s relationship with her beyond the sex scene which Sue uses to lure him. If she is perpetrating revenge on her own daughter as a sort of Orestia “sins of the fathers,” this is not apparent or reinforced with symbols. Sue is not fleshed out toward this or any end.

In fact with the exception of the father, the other characters are “types.” Just to exclaim, “Well, humans don’t have reasons why they behave as they do as an answer to the questions the play raises doesn’t cut it, especially when we see how full and deeply Howard is drawn. We know the same depth might have been added to the other characters; this is not beyond the playwright’s talents; the play doesn’t have to be lengthened to do this, either. The problem left the actors doing the best they could to fill in the gaps.

If the work is being revised and funded to go elsewhere, filling out the women characters (from their paper-thin renderings) is an imperative. We don’t need to see another caricature of a “dumb blonde slut” who abandons her baby and runs away; if she has characterized herself as this…how interesting…then this needs to be clarified through symbol, poignant dialogue, hopeless yearning. It wasn’t. What a shame. This is doubly unjust when the demonstrated home life shows no commensurate explanation for her actions except for a few convenient phrases about her past and at best we are told “she is finding herself.” Also, for the  characterization of May, we don’t need to see another termagant upset with her job: is she schizophrenic? Well, then, OK. Child of alcoholics? OK. Repudiated by past loves? All right? Challenged in some way besides having no college education? OK. Something? Nothing.

A quiet moment before all hell breaks loose.

Is there a character who makes sense? The character of Sam is the perfect Geek as counterpoint and his begrudging relationship with his father comes  through due to Howard’s mea culpa admission he was wrong as he hugs his son before Sam leaves for college. There is something beyond his disgruntled existence and curt, abrupt anger. But what? The Geek stereotype is current and trending (if his phobia of being touched is pushed for effect) so the playwright can get away with it. With Howard’s well drawn characterization and Sam’s stereotype Geek carrying that portrayal, these two fare OK in the play; there is some attempt at connection, only due to Howard reaching out. As for Sam, again a one note stereotype tottering on the edge of human feeling.

My normally perceptive sensibilities ran into confusion upon confusion the play never answered and bring the questions to the playwright’s door. Oz, as intelligent as he is selects Sue when there are so many phenomenal black/white/hispanic sexy women who are alluring and predatory as well. It is suggested Oz is naive with women (All the more reason for the question, why isn’t he snapped up by anyone else as he is engaging and adorable. Here come the cougars!) and is lured by her sexual gifts. Is this not the typical “black man attracted to the white, blonde woman?” obnoxious stereotype? If so it is subliminally racist. Either hone in on this with symbolism, revealing this is Oz’s problem, OR reveal that he is not a free black man who isn’t tied down by his own racial bondages and is there for another reason. The fact that Oz hangs around also because he never had the warm feelings of family? If that is the case, his actions at the end could have been made so poignant…she runs away, he stays because he has found love from Howard and May who accept him. (This is ironic and dubious, by the way.) We see no discussion or hint of any undercurrents he will stay. The end is disjointed at best, but again, that is supposed to be the charm of this free flowing mish mash. Unfortunately, life is much more dirty, specific, real, uncontrived and deep, soulful and complex, unless you tell me that all these people are on meds.

Overall, I think I would have swallowed the incongruities, if this play’s setting was a small, blue collar city in North Carolina, Ohio, Missouri, South Carolina or the Midwest in the 1990s. A Midsize Northeastern City, the present? I don’t think so. This setting was incongruous with the characters’ beings and sensibilities and behaviors. Additionally, the fact that technology was so absent from the play was another failing (Sue has no Android? or Oz? I know folks on the poverty level who sport Smart Phones. I TAUGHT THEM.)  And the only one who we see using a cheap mobile is Howard…he also gets an iPod from Oz, not at the suggestion of HIS GEEK SON? I don’t care how much of an isolated recluse he is…it’s technology, computers, smart phones. OMG.)

The setting as “the present” an eastern city is abjectly myopic and discordant with reality. I know 19th century practice in the theater TODAY prevents the use of Social and Mobile to its UTTER STUPID DETRIMENT. (Did you see Roman Tragedies at BAM? They integrated the use of Mobile devices for the audience..brilliantly. We took pictures {OMG, YES…THE TAKING OF PICTURES DURING A PERFORMANCE WAS ALLOWED! We promoted that production with the immediacy of Tweets and FB and Instagram. The audience was employed as the marketing arm of the producers.  FOLKS IT WAS FREE PUBLICITY!!!!  DUH!} I am glad European theater, once again, is MORE BRILLIANT than restrictive, enslaving,  feudalistic old media which must in greed and cupidity HAVE ITS PROFITS.  How utterly stupid. Go check out the Oreo brand and see what they’re doing if you want to be profitable.} NYC theater is downright Byzantine and Philistine and the death knell is coming as a result.)  But to eliminate mobile devices from the play and say this is the present? Well, it beggars all rationality.

IS ANYONE OUT THERE IN THE LIVE THEATRE LIVING IN THIS CENTURY? Or is there a rife schizophrenia in the theater community and no overlap between onstage works whose settings are supposed to be current and theater people’s own lives where they use Mobile and Social daily? Either change the setting or, change the setting or change the setting, Bob Glaudini. Then flesh out the characters and answer the incongruities you’ve raised beyond contrivance and convenience with specificity. For Oz… What is the unconscious glitch in his being? He knows “malefic”; has he not read the culture’s twistedness in Autobiography of Malcom X to understand his attraction to a clueless, blonde, white woman to forestall it? May? One note- tra, la, la? Sue- this is a very deep woman-where? Sam just isolated by his mother’s loss into geekiness and angry reticence? Again, too many questions and the playwright’s intent doesn’t even adequately hint at the deeper whys. We are left with demonizing Sue, happy Sam escaped…not sure what he escaped, as he’s taking everything with him, feeling sorry for Oz and hopeful for Howard and May’s coming years, especially since May’s chief cause for anxiety is over and she’ retiring. That is not even the beginning of irony for this “family for all occasions.”

I so wanted to really like this play because I appreciate the work of its Director, Philip Seymour Hoffman, the actors, the playwright Bob Glaudini and the usual daring of The LAByrinth Theater Company.  I was let down. I hope the play will evolve. It has possibilities if the kinks are ironed out. If no one notices these issues, all the better for them, especially if they receive backing to go farther. Visionary playwrights know this to be so and they seek ways to develop and evolve their work.  Will that happen for this play?

Posted on May 30, 2013, in NYC Theater Reviews. Bookmark the permalink. Leave a comment.