← Roundtable Talk With Kevin Kline and Israel Horovitz About The Film, ‘My Old Lady’
Who Was Edgar Degas? The Musical ‘Degas in New Orleans’ Reveals Another Side of the Painter →

Jeanne Fayard at the Rodin Museum with her book on Camille Claudel. Photo by Carole Di Tosti

Jeanne Fayard is a French writer who is an expert on sculptors August Rodin and Camille Claudel. She has made an invaluable contribution to what we know and understand about Claudel’s early years in her book Camille Claudel.

When I was in Paris, I had the occasion to speak with Jeanne Fayard at length about Auguste Rodin’s one time mistress, who was a magnificent sculptress in her own right. Indeed, Camille Claudel who met Rodin when she was around 19 inspired some of Rodin’s finest work. Claudel has been the subject of two films (Camille Claudel, Camille Claudel 1915), because of her extraordinary life as a maverick artist and because of the dramatic response of her family to her individuality, autonomy and sheer genius all of which caused her mother great distress. Camille Claudel lived in a time when women were pawns; Catholicism crucified women who stood against the grain in how a woman was supposed to comport herself; morality for a woman was supposed to be above reproach.

Camille’s father shielded and supported her throughout the first part of her career, despite her mother’s profound disapproval of her daughter. After her father died, Camille’s mother and brother, diplomat Paul Claudel, had Camille committed to an asylum in 1915 because of Camille’s alleged mental illness and outrageous behavior. Despite the implorement of doctors and others of renown who clinically deemed her eccentric but not insane, her mother and brother made sure Camille remained committed. It is certainly a tragedy for us and the art world that she spent the last thirty years of her life in confinement unable to work on any sculpture or art, an act which the family had forbidden.

Camille Claudel’s The Age of Maturity (1899), a controversial and extraordinary work at The Rodin Museum. Photo by Carole Di Tosti.

Fascinated by her subject and inspired by Jacques Cassar’s work and her love of Rodin, Jeanne Fayard continued her investigation of Camille Claudel. Through a process of viewing Camille Claudel’s amazing sculptures and comparing them with Rodin’s, Fayard realized that Claudel had launched out on her own led by a brilliance that could not be learned, that could not be instructed. Fayard understood that Claudel had a light, a divine provenance within her soul that fostered such incredible work. It was this light that struck Camille’s father to support his daughter. It was the same animating light that motivated teacher/sculptor Alfred Boucher to mentor Claudel for three years and then encourage Rodin to work with her. It was this same vitality that entranced Rodin into a tempestuous affair with her. And it was this stirring force of Camille’s vibrance that influenced Rodin’s work to new heights.

The realizations prompted Jeanne Fayard to search back into Camille Claudel’s early childhood. There she understood Claudel’s motivations, her early talents in drawing and art. In her investigation she discovered her personality, her determination, her influences, her inspirations. Fayard’s explorations revealed how Claudel’s early life shaped her psyche to develop what would become an incredible artist in her own right apart from Rodin. Indeed, these early beginnings molded Claudel like the clay she shaped into the figures that would eventually be cast into bronze or other materials and that are now housed at the Musée Rodin in Paris. 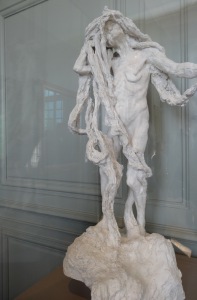 Fayard’s work is essential to understanding how Camille Claudel’s elements as a child, melted under the heat and pressure of her life with family — her mother, brother, father and sister. The early years, revealing her own innate artistic talent and acumen were the crucible which formed the woman who was a maverick for her time and one of the most striking and originally skillful women sculptors of all time. Certainly, she was a feminist if that word may be loosely applied to Camille Claudel’s bravery and mental fortitude to leave Rodin, destroy the work some of which she created during the period she was with him and move into the dark, uncharted waters of her own soul’s genius.

Jeanne Fayard’s work is in French, and if one has an average knowledge of the language it is easily understood. Certainly, for what it contributes to our knowledge of Camille Claudel, it should be translated in English to inspire those who adore Claudel’s work in this country and those future female artists who would gain inspiration from reading about Claudel’s early beginnings. For women Claudel’s entire life is a crucial read; it provides a revelation of the extent to which women are capable of coming into their own, and the extent that that remains a dangerous threat to other women who have the power to destroy them.

← Roundtable Talk With Kevin Kline and Israel Horovitz About The Film, ‘My Old Lady’
Who Was Edgar Degas? The Musical ‘Degas in New Orleans’ Reveals Another Side of the Painter →