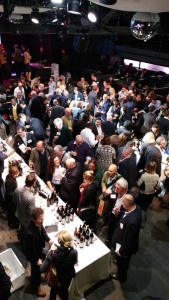 Slow Wine 2016 is in its 5th year touring the globe with stops in Asia, the USA and Europe. Traveling in the US, Slow Wine Guide’s editorial team and select winemakers went from west to east moving from San Francisco, Los Angeles, Austin and New York before they will be heading over to Europe.

Many New Yorkers are proponents of the Slow Wine Guide. They have come to expect excellent wines based on the Slow Wine mantra of good, clean, virtuous wines whose winemakers employ sustainable agriculture, use little or no pesticides or herbicides and engage in traditional time worn techniques using centuries-old indigenous grapes from the various regions of Italy.

Judging from the turnout at the Highline Ballroom, February 3rd, distributors, wine educators, retailers, sommeliers and others in the industry were anxious to become acquainted with exceptional slow wines produced from every region of Italy. A number of the producers were present in NYC rounding out the last of the US tour. Most of the winemakers I spoke with appear in the Slow Wine Guide which was available for purchase during the incredible tasting of reds, whites, dessert wines, and sparkling astis. The Slow Wine Guide features the best Italian wines as determined by Slow Food editors. The guide is also an App and is available for download on the App Store for iPhone.  The App, like the guide hard copy, tells the story behind the producers, their vineyards, and Italy’s wine-producing regions.

This walk around tasting featured many small-scale winemakers who are using traditional techniques. Following through on their ancestral history and the bio-dynamic changes that have been occurring over the decades since the concept of “Slow Food, Slow Wine” emerged and was implemented, the producers work with respect for the environment and terroir. They make sure to safeguard the incredible biodiversity of grape varieties that are part of Italy’s heritage.

Winemakers who embrace the Slow Wine Guide symbols and standards are truly coming into their own. I talked to a few sommeliers and educators associated with culinary institutes. They agreed with me that when the producers began to convert from the chemicalized agriculture to bio-dynamic and sustainable tenets, the wines they initially constructed were not very good. However, as winemakers shared information and worked to perfect their techniques over the last thirty years, today the wines they produce taste out of this world. For me of vital importance is the added assurance that the agriculture used to produce the taste is sustainable. Most of the wineries have US distribution. 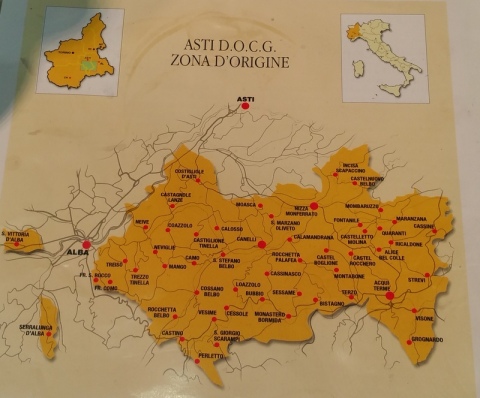 The Piedmont region of Italy. Turin is the capital. It has been designated a UNESCO World Heritage site.

Some of the producers whose tables I visited were from the Piedmont region of Italy, with Turin as its capital, a place where some of my ancestors are from. In north western  Italy, the Piedmont is a region whose wines I was not familiar with. What I found particularly interesting is that the Langhe wine making zone in the Piedmont has been recognized as a UNESCO World Heritage Site. That added protection will hopefully maintain the flora and fauna of the area for decades and will protect the vineyards and producers from land raids by developers.

There were two other wine regions I sampled wines from: Emilia-Romagna and Tuscany, both whose regional wines I tasted before this event, though I had not tasted wines from these producers which were just great. From  Modena in Emilia-Romagna is the winery Cantina Della Volta whose “prestigious cellar is old in origin but modern in conception” according to the Slow Wine Guide 2016. And from Tuscany was a type of wine that I drank years ago at family gatherings but I thought was boring: Chianti. Chianti has been revolutionized. It overshadows many of our West coast reds for drinkability and agricultural integrity. When I tasted the offerings of Badia a Coltibuono, I was impressed. Slow Wine states that the winery is “a paragon of good Italian viticulture and has been certified organic since 2000.” All of their efforts to work sustainably have produced some incredible Chiantis. After having turned up my nose at this type for years, Badia a Coltibuono as made me a convert to be on the lookout for more amazing Chiantis like those of this winery.

This year’s Slow Wine 2016 was an exceptional event. Because of the tenor of what it means to produce the fruit of the earth without harming the vines, the terroir and environment, I am persuaded that these wines are finally achieving a level of quality that conventional wines produced with chemicals will never attain. I am sorry that I couldn’t get to each vintner, but I do have the Slow Wine Guide to keep me apprised of the offerings of great Italian vintages that have been produced in a growing style that most wine lovers will come to expect over time because the wines are incomparable.

Continually, Europe has been way ahead of the United States with regard to sustainability, local food sourcing, the rejection of radiated foods and the labeling of GMOs. Unlike the US, Europe has banned over 1000 chemicals which appear on a blacklist as toxic for people and the environment. To have such chemicals (herbicides, pesticides, chemical fertilizers) used in the production of agriculture and husbandry (antibiotics, growth hormones, processed feed), is anathema to most countries in the European Union. Because Italians are assiduous keepers of clean food and wine, the quality of the food Italians experience daily has superb taste, nutrition and cleanness. To have wines which exemplify the same value and worth as their food makes complete sense and complements a daily lifestyle that shows an appreciation for life and beauty. Would that we were to follow the European and Italian Slow Food and Slow Wine example.

This article first appeared on Blogcritics.