← The Top 50 Sites for Indie and Self-Published Authors
VINO 2016: Cantina Sampietrana, the Wonderful Wines of Puglia →

VINO 2016: The Story of Montepulciano D’Abruzzo 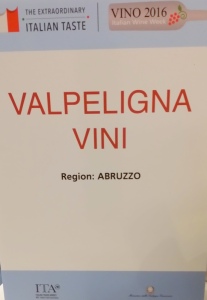 The last day of VINO 2016, Italian Wine Week at the Hilton Midtown, NYC (February 7-9) I ran into Chris, a friend and wine connoiseur. This was in the grand ballroom where over 125 Italian wineries and their representatives were exhibiting their wonderful wines. During such amazing tastings, I try to feature one or two regions of Italy and concentrate on their wines. But I always know I am giving the other wineries short shrift. So many wines, so little time! It helps when a friend covers one area and I another and we swap notes.

Chris recommended I stop at Valpeligna Vini and try the 2010 Montepulciano which he really favored along with meeting the two brothers Marco and Giuseppe Iacobucci who were representing the wine cooperative that produced the wines. When I stopped by to see if I agreed with Chris, I spoke to Roberto Polidoro who told me an interesting story and cleared up a few facts about the wines we associate with Montepulciano that for me, Frances Mayes made famous in her book Under the Tuscan Sun. 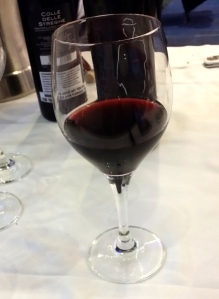 Did you know that Montepulciano D’Abruzzo is a particular grape that evolved in Abruzzo (the province running from the Appinnines, East of Rome to the Adriatic coast), and it is not to be confused with the wine referred to as Montepulciano, actually Vino Nobile di Montepulciano, a Tuscan wine which is a meld of Sangiovese and other grapes? I did not. Italy has over 500 indigenous varietals that are found in the twenty regions of Italy. To give you some perspective, France has only 15 varietal grapes. So when one begins to learn about the great wines of Italy, you will learn amazing stories about the evolution of their many, many grapes and you will want to continue learning about them once you begin to get your “feet wet,” and try another grape varietal or blend which is at the heart of another superb Italian wine.

This is the interesting story about the Montepulciano grape varietal, which did NOT originate in Tuscany, even though it takes the name of the town of Montepulciano in the province of Siena. The grape that grew in Tuscany in the area of Montepulciano was the Prugnolo grape varietal. Prugnolo was cultivated around Montepulciano, Siena since the Renaissance. All the European Renaissance courts from Venice to Paris adored Prugnolo. However, it was around the XVIII century before the French Revolution in 1789 that the Mazzara Nobility had the Prugnolo grape transplanted in the Peligna Valley because of the appropriate climate, soil and other features. The farmers and vintners in the Peligna Valley liked the wines produced by the Prugnolo, but didn’t use that appellation; they used a short-cut to name it, like saying “that Montepulciano grape.” 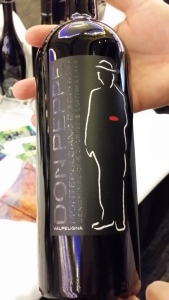 It has been documented by travelers at the time (Michele Torcia) of 1792 that the grape referred to as “Montepulciano” was being grown everywhere in the Peligna Valley. The irony is that the nature of the micro-climate, the soil, the suns and winds and the cultivation techniques impacted the Prugnolo and actually changed the life blood of the grape’s morphology and thus evolved a completely different grape varietal which those of the then Abruzzo-Moliese (now Abruzzo because the two provinces split in 1963) region were growing. They referred to it as “Montepulciano.”

Thus, who would think that from the Prugnolo, a different grapevine evolved and it was the familiar named grape varietal, Montepulciano. After the split of the provinces in 1963, it became Montepulciano D’Abruzzo because the Peligna Valley and other areas in Abruzzo are where the Montepulciano grapes are grown. 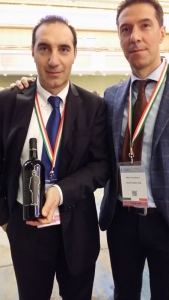 The full-bodied, bold character of the “that Montepulciano grape” is best realized in the Peligna Valley where Marco and Giuseppe Iacobbuci and other vintners combine their efforts in their cooperative, Valpeligna Vini. And I must say the wine of the Montepulciano D’Abruzzo D.O.C. is sensational and very different from the Tuscan Vino Nobile di Montepulciano, a blend.

I tried the Don Peppe 2010. Its color is dark, deep ruby red. There were lovely notes of black cherry melded with vanilla. It was complex and layered and had a long, strong finish. The tannins were not overwhelming but balanced. Such a wine is great with Grana Padano and other sharp cheeses, salumi, and of course, red meats, roasts and pasta.

Italian wines like the Italian people themselves have within them an amazing story to tell. If we remember that all of Italy’s peninsula is a phenomenal food and wine region (I like to say you can’t get a bad meal in Italy), with the evolution of grape growing morphed by nobles and peasants alike, by monks and clergy who were diligent vintners. The wine tradition goes even further back to the ancestors of today’s Italians, for example, Etruscans, Samnites, Greeks, Romans because often the wine which was fermented, was SAFER and more delicious to drink than water. Indeed, there are similarities to today and upon doing a bit of research, it is amazing what one discovers: the more recent Montepulciano D’Abruzzo grape varietal is a welcome, wonderful addition to Italy’s indigenous varietals.

For me the story of this grape represents the ingenuity of vintners and how they are constantly developing and enhancing their vineyards with improved techniques to tease out the finest most luscious quality wines. As an added note, this does not involve use chemicals (pesticides, herbicides) over a thousand of which are banned in the European Union. The Montepulciano D’Abruzzo is strictly the morphology of the terroir, the microclimate of the Peligna Valley, the sun, wind and rains of the region as it develops from year to year and enjoys its enriched life. These wines of Valpeligna Vini are all bio-dynamic. They are grown with the passion and tender care of the vintners whose vineyards are on the Maiella hillside in Abruzzo. For further information check: Valpeligna Vini.

← The Top 50 Sites for Indie and Self-Published Authors
VINO 2016: Cantina Sampietrana, the Wonderful Wines of Puglia →