← KIKU Exhibit at the New York Botanical Garden
Patrizio Buanne, The Incredible International Singer in a Video Interview at the Friars Club →

Kenneth Lonergan at the NYFF 2016. He was unable to appear at the HIFF 2016 for Manchester by The Sea, his best film to date. Photo by Carole Di Tosti

Manchester by The Sea is a pageantry of human emotions that Kenneth Lonergan prodigiously marches with relentless precision across the screen, encapsulated by the astonishing performances of Casey Affleck, Michelle Williams, Lucas Hedges, and a superb supporting cast. The plot development is a complicated paradox which exists on two levels. One is the emotional, interior level where protagonist Lee Chandler (Casey Affleck is breathtaking and magnificently drafted as the tragic everyman), reflects about a past he wishes to escape. The other is on the level of linear time in the present where Lee confronts his brother Joe Chandler’s (Kyle Chandler) death and the multiplicity of mundane details that must be carried out. Joe’s passing forces Lee to return to Manchester by The Sea, settle his brother’s affairs, and possibly assume the guardianship of his brother’s son, Patrick.

Lee’s former hometown is a place of great beauty, but Lonergan reveals by the film’s conclusion, that Manchester by the Sea may be a scenic paradise only if one has peace and joy within. For the protagonist it is the razor’s edge slicing his already bleeding soul. Of all the locations on earth, it is the last place he would wish to be to thrive emotionally in wholeness.

Michelle Williams in ‘Manchester by The Sea’ at the NYFF 2016 and HIFF 2016. Photo from the film

Cinematically constructed with a canny, unaffected minimalism, Lonergan alternates between the vividness of exterior scenic beauty of the coastal New England setting, and the nullifying, hackneyed interiors of families in homes which are supposed to be comfortable, but which are less than warm or real. The film’s tones are elusive and ever changing with haunting echoes spiked with humor, levity, somberness, and poignancy. Striking glimmers of scenes flare into one’s consciousness long after one has left the theater. It would be an understatement to say that this film is remarkable. It pulses with the vibrance of what makes us cling to our lives in hope, long after we, like Lee Chandler, may have been emotionally blasted by circumstances to merely exist in a roiling inferno of quiet subterranean rage and immobilizing despair.

At the heart of this film there is mystery and lustrous revelation. Lee Chandler’s suppressed identity and what he has experienced is gradually made alive to us so that we may empathize with him and wish for his redemption and healing. Lonergan has created a powerful human drama with broad and masterful strokes of storytelling. He unspools the underlying dramatic events with flashback. The flashbacks are the raw, vibrant dynamics which are Lee’s place-induced memory reflections as he robotically goes about the task of returning to Manchester to deal with his brother’s remains, hold the funeral, settle the financial estate, and monitor his teenage nephew whose enthusiasm for activities and girlfriends is a blind for the pain of losing his father and having his life upended by his uncle’s impending guardianship.

During the activities in the present, Lonergan alludes to Lee’s past through the townspeople’s off-handed comments; his identity remains a cypher. The mystery of Chandler’s going through the motions of existing in the present while living in a hyper-drive of emotional memories from the past, we later discover, is tied up with a horrible accident. For Lee and his former wife, Randi (Michelle Williams is simply, completely stunning), it is a cataclysmic, life-altering devastation. The writer gradually uncloaks the keystone revelation in a swift cut of shockingly unexpected visual images that explode on the screen and in our minds, then reverberate like the aftereffects of an earthquake. 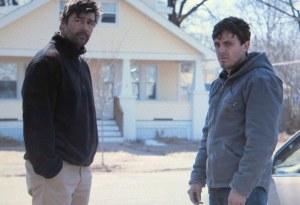 (L to R): Kyle Chandler and Casey Affleck in ‘Manchester by The Sea.’ Photo from the film

It is a revelation that occurs well into the film, and it coalesces all our understanding about who Lee Chandler is and what he is going through. From then on, our empathy with his plight includes the hope that he will be able to forgive himself, end the self-flagellation and eventually reconcile his emotions to walk the road of healing. For the present it is perhaps just enough that Chandler can breathe and experience the physical manifestations of living until deliverance arrives, if it ever does, an uncertainty that concludes the film.

We know nothing of this as the movie opens. We only discern the flattened affect of Chandler’s mechanical non-existence as the superintendent of a building in Quincy, Massachusetts. It is an existence from which he is interrupted when he must return to his former hometown, a place of exterior beauty and, for Lee, emotional terror, to deal with his brother’s death. Once there he must confront family, his nephew, and former friends under the continual oppression that reminds him that Manchester by the Sea, represents a wasteland. There, he has lost everything meaningful he has ever known.

Lonergan takes us painstakingly through the details of Chandler driving to Manchester reflecting (one of a number of flashbacks), upon the day he first heard of his brother Joe’s (Kyle Chandler is memorable in the supporting role), physical diagnosis that eventually leads to his sudden demise. The flashbacks create mesmerizing storytelling; they reveal family history, Lee’s relationships with Joe and his nephew Patrick (a humorous, heartfelt performance by Lucas Hedges). They also highlight the fragmented relationship between Joe and wife Elise (Gretchen Mol). If one studies the flashbacks as Lonergan integrates them with the arc of the plot development in the present, we understand that the whole is defined by the sum of its parts. Brick by brick Lonergan constructs the foundation of Lee’s condition and life path showing they have been arranged by these telling and vital moments revealed in the memories upon which hang his emotional threnody.

(L to R): Casey Affleck and Lucas Hedges in ‘Manchester by The Sea.’ Photo courtesy of the film.

With functionality the filmmaker also uses Lee’s reflections and memories to provide the solid plot points upon which are built the conflicts and the issues Lee must confront in the present as he is forced to deal with the horror of his past. We discover why his brother wanted him to take on the guardianship of Patrick. Underlying all of this is the linchpin issue: the conflict between Patrick and Lee which must be resolved. Will Lee force Patrick to live in Quincy where Lee’s job is, a safe haven for Lee far away from the hell of Manchester by the Sea? Or will Lee sacrifice himself for Patrick’s happiness so Patrick can be with friends, girlfriends, and activities he loves, fulfilling his life in Manchester by the Sea? One’s fulfillment is the other’s sorrow. For Lee, in Manchester floats the ashes of his former happinesses that are gone forever.

Patrick asks his uncle, why go back to a one room apartment and a job that he could do anywhere? It is an irony. And Lonergan answers Patrick’s question through an extended flashback, Lee’s memory of the horrific accident. Lonergan paints Lee’s remembrance in sharp visual images that emotionally stun, accompanied by an amazing selection of music (the music is brilliantly chosen throughout). Through this pointed flashback the mystery of Lee’s being and changed identity is brought into the unfortunate light.

The meat of the film is how Lonergan carefully patterns the relationship between Patrick and Lee starting with a joyful memory Lee has (in flashback), before tragedy strikes both brothers when Patrick was a youngster. It is a happy moment during a fishing outing and Lee kids Patrick about choosing him over his father. The irony is tremendously layered in the jump from the past to the present where it becomes twisted and sardonic; Lee must tell Patrick about his father’s death.  Of course, if he could choose, Patrick would rather his uncle have been the one to die, not his father. And Lonergan clarifies as the film progresses, Lee would gladly have chosen to be the one who would die rather than Joe. But fate twists reality into the antithesis of their desires.

Lee gradually adjusts to his nephew whom he hasn’t seen in a long while.  In Lee’s case, he appears to be emotionally non-present (we learn later it is  because his feelings are acutely raw; he must attempt to freeze them or erupt in a white heat electrical storm of rage). Patrick in youthful oblivion to his uncle’s state and even his own, blows him off temporarily for his two girlfriends, his hockey, his band, and his future prospects. But the strain and pull of youth and age, of humor, and the light and dark between them encompass the high points of the film which are immensely entertaining and an effective counterpoint to the sorrow and stirring scenes of heartbreak.

The emotional variety and seeming random reality of the actors’ performances captivate. It is impossible not to identify with the protagonist, despite how much one wants to extricate oneself from Lee’s engorgement on self-flagellation and broken heartedness. The scene between Randi and Lee toward the conclusion is Shakespearean and is incredibly human and real. Michelle Williams and Casey Affleck are not rendering performances, they are rendering a kaleidoscope of raw, emotional power. They are devastating. 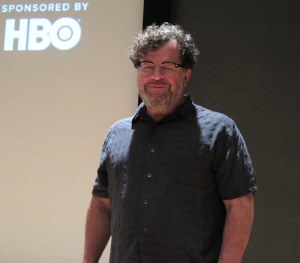 The irrepressible Kenneth Lonergan posed for me at the NYFF 2016 after a Q and A about ‘Manchester by The Sea’. Photo Carole Di Tosti

Lonergan presents the case, that some hardships might be too much for any individual to bear. Lee Chandler finds a way, even if it it brings him into a state of oblivion. Catastrophe has sifted his soul and he has found himself wanting. It and his response to the accident place him in a limbo akin to an eternal process of dying without the imagined peace of finality. Lonergan’s film is a case study in the tragedy and triumph of the human spirit, even if it is to just get to the next second in linear time while enduring a parade of painful images erupting from one’s unconscious.

Lonergan’s acutely crafted storytelling emerges from his discrete human characterizations. His dialogue throbs life like a palpitating heart. His visual craft seamlessly modulates his characters’ feelings and interplay. Like life’s dynamism, the effect is so intricate and whispering, that one can miss the broader picture of beauty in suffering and redemption in nanoseconds of humor and felt connection with others. All this is to say that the film is absolutely fantastic. It is a must see for the levity and pathos and the incredible cast Lonergan has marshaled to relay what is most tragic, humorous and uplifting in our lives.

This review first appeared on Blogcritics.

← KIKU Exhibit at the New York Botanical Garden
Patrizio Buanne, The Incredible International Singer in a Video Interview at the Friars Club →