‘The Awakening of Kate Chopin’ by Rosary O’Neill, A Salon Reading

Poster of InspireCorps’ presentation of the reading of ‘The Awakening of Kate Chopin’ by Rosary O’Neill. (courtesy of the playwright)

Recently (February 13), I attended the salon of Stephanie and Ghordie Thompson, 420 12th Street, Park Slope, New York where a staged reading of Rosary O’Neill’s play The Awakening of Kate Chopin staring Michelle Best and Chris Stack was presented. Directed by Keith Bulla, this post Civil War romantic drama takes place in  1882 at The Chopin plantation 100 miles from New Orleans in an impoverished and destitute one street town in rural Louisiana.

Michelle Best played Kate Chopin, the defiant Irish beauty with a captivating frankness of expression and a brilliance of action.  In the play, Kate Chopin (future author of The Awakening) must decide between her dying husband and her lover, Albert the wealthy planter next door (Chris Stack). She chooses her lover. He leaves her. In agony she goes forth to become the great writer she was meant to be. 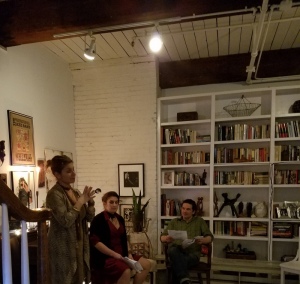 (L to R): Stephanie Thompson introducing the actors Michelle Best and Chris Stack in a reading from ‘The Awakening of Kate Chopin’ by Rosary O’Neill (photo Carole Di Tosti)

This tour de force of obsession and liberation is rooted in the real life of the famous first great American novelist Kate Chopin. Chopin was considered a fine writer until she violated the mores of her time with her second novel, The Awakening (1899). She dared to portray her protagonist Edna Pontellier as a woman who evolves into a free thinking, free acting woman. Edna seeks out autonomy and uplifts her own individuality, regardless of the Southern culture’s finding this to be intolerable. These were near heretical notions for women in 1899 when the book was published, even in the North.

Because Chopin portrayed Edna Pontellier truthfully, revealing her sexuality, her rich, inner life of freedom and her complex relationships with her husband and other men with whom Chopin, following literary conventions, insinuates she had passionate affairs, the press vilified her. For Chopin’s forward-thinking depiction of Edna and the other women in the novel, which was years ahead of its time, her work was excoriated as “morbid,” “vulgar,” “disagreeable.” Depressed about its reception, though it received a few positive reviews, Chopin returned to her short story writing, and never wrote another novel again. Four years later she suffered from a brain hemorrhage at the St. Louis World’s Fair and died two days later.

O’Neill’s play is based on elements of Kate Chopin’s life some of which may be discovered in a biography Kate Chopin by Emily Toth (1990). The Awakening of Kate Chopin details interesting concepts about Chopin’s life which dovetail with her characterization of Edna Pontellier and add an accessible elucidation to an understanding of the writer

Michelle Best as Kate and Chris Stack as Albert are positioned tellingly, one anticipatory, the other relaxed and in control. A reading of ‘The Awakening of Kate Chopin,’ presented by InspireCorps (photo Carole Di Tosti)

The play uncovers events which happened in Chopin’s life prior to establishing her writing career in St. Louis, Missouri where she eventually moved. O’Neill cleverly indicates that Chopin used autobiographical elements of her own life (all writers do) as literary fodder to create her magnificent portrayals of women in The Awakening, a novel venerated and read widely in schools, colleges and universities today.

O’Neill’s Kate and the other women in the The Awakening of Kate Chopin are equally revolutionary for their time, and O’Neill’s work echoes the life of the real Kate Chopin. O’Neill’s Kate wants to hold on to her marriage and her six small children. On the other hand there is the allure of reaching beyond the traditional roles forced upon women. Kate’s inner life encourages her to perhaps seek something which she could call her own. 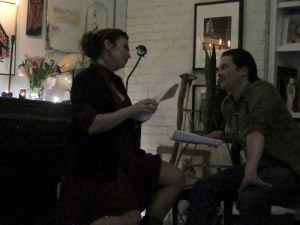 The tension continues in a reading of ‘The Awakening of Kate Chopin’ by Rosary O’Neill with Michelle Best as Kate and Chris Stack as Albert, her lover (photo Carole Di Tosti)

As inexorable circumstances close in on her marriage and situation, Kate is inspired to launch herself as a novelist. However, her relationship with her husband is strained and she becomes walled in when their cotton business goes bankrupt and a wealthy next-door neighbor presents more complex problems.

Ultimately, O’Neill’s Kate is is torn between establishing her own independence by writing and maintaining her love for her children, against negotiating a failed business, a philandering husband and a seductive, sexy planter. Though the sequence of events has been tweaked with regard to the real Kate Chopin’s life, there is a passionate affair (scandalous for the time).

The conflicts and elements in O’Neill’s evocation of Kate Chopin’s life in The Awakening of Kate Chopin are all too real. Many women in 2017 will empathize with O’Neill’s characterization of her protagonist, for she is an iconic woman confronting issues that married and unmarried women face in their life journeys. The Awakening of Kate Chopin, which leaves off right before the real Kate Chopin moves to St. Louis and becomes known to the world, is an epic drama of the first American woman novelist who is still highly controversial today.

I was intrigued to be at the salon to hear the reading of segments of the play for the first time with these well cast, fine actors. Michelle Best was subtle and evolving as the conflicted Kate. Chris Stack portrayed the sexy Albert with predatory insolence and sensuality. The soon-to-be-divorced Albert helps save Kate’s family business from Oscar’s (her husband) poor decisions while igniting her desire for a sexual relationship. 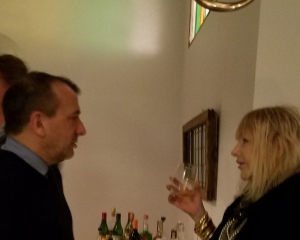 Keith Bulla is a director who has extensive experience working with playwrights on the development of new work. He predominately does this at the Actors Studio but may be encouraged elsewhere if it is the right property. Bulla’s interest and insight spearheaded the reading. His gentle skill with the actors elicited from the depth of O’Neill’s writing a growing understanding by Best and Stack of how to best access these complex, fascinating characters.

The salon was sponsored by Stephanie and Geordie Thompson who are co-founders of InspireCorps, a non-profit arts education organization dedicated to supporting the arts. 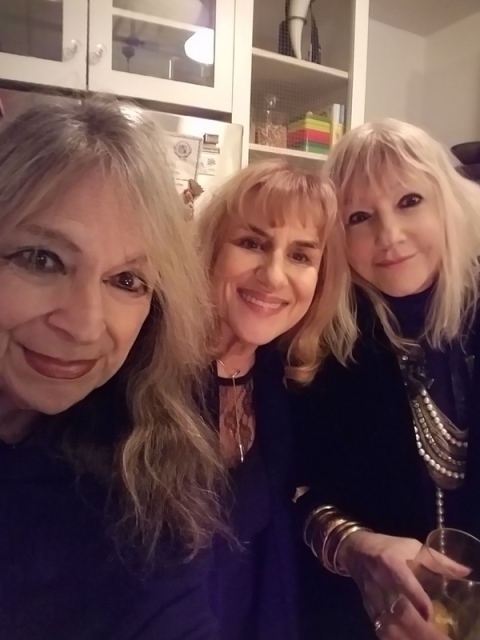 Based upon the audience’s response in the “talk back” which generated discussion about Kate Chopin as a writer ahead of her time, yet obviously living these events in her time before she moved to St. Louis where her writing took off, I would say this is an auspicious “first” which portends great things to come for The Awakening of Kate Chopin.