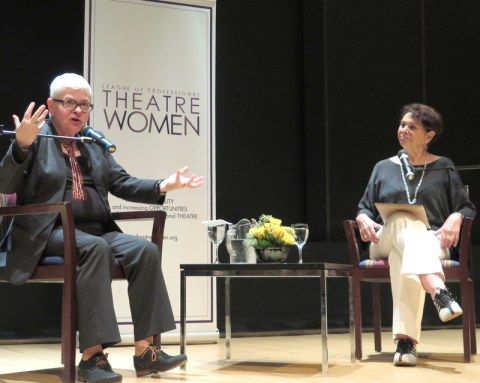 The League of Professional Theatre Women’s Pat Addiss and Sophia Romma again have successfully collaborated with Betty Corwin, who produces the New York Public Library’s Oral History Interviews, to present an enlightening, joyous evening with one of Broadway’s hottest playwrights, Paula Vogel. In conversation with Linda Winer, long-standing theater critic of Newsday, the Pulitzer Prize-winning playwright discussed her life, her work and the journey of her play Indecent from conceptualization through development, regional theater production and Off Broadway right up to its current run at Broadway’s Cort Theatre. The immutably themed Indecent has been nominated for a Tony Award in the category of Best Play. It is not only a must-see, it is a must-see two or three times over for its metaphors, themes and sheer genius.

Paula Vogel, a renowned professor of playwriting (Brown-two decades, currently Eugene O’Neill Professor of Playwriting (adjunct) at Yale School of Drama, Playwright-in-residence at Yale Rep) generously shares her time and dynamism with global communities. She conducts playwriting “boot camps,” and playwriting intensives with various organizations, theater companies and writers around the world. What is smashing is that Vogel not only is a charming, vibrant raconteur, she is an ebullient, electricity-filled advocate of the artist within all of us. 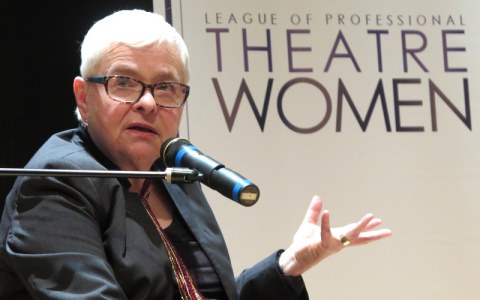 In her philosophy and approach toward theater, we are all story tellers, we are all playwright,s and we must cultivate the citizen artist within to insure that the theater arts are accessible and relevant to all cultures and populations, not just the “haves.” What she discussed about the current state of theater arts past and present was profound and prescient in response to why it took her so long to get to Broadway. Vogel reminded the audience that in the 1980s there were about 50 innovative, theme-rich plays on Broadway exemplified by The Elephant Man and M Butterfly. Such plays dealt with difficult issues that brought audiences together in a profound communal experience. Currently in 2017 there are a handful of productions that effect this. Commercialism has enveloped Broadway.

Hence, Vogel expressed a motivating joy that perhaps we should all entertain. We should roll up our sleeves to fight the good fight against philistine commercialism and consumerism and Byzantine gender and racial bias. Such dampening restrictions and discriminations parade behind the notion that film and theater are essentially liberal mediums. Vogel introduced the thought that they are the opposite. To her way of thinking there is a profligate conservatism akin to that of corporate America that hampers theater innovation and prevents provocative theater production to readily make it to Broadway.

However, she did affirm that the next generation of playwrights, whether older or younger, are seeing an explosion of work featured Off Broadway and Off Off Broadway which is where a lot of the innovation and experimentation has found a home. That aspect of the theater is thriving and in the upcoming years we can expect an elegance of defining work that will have an illuminating impact on Broadway.

A believer of reverse capitalism, that supply increases demand, Vogel’s ideas and effervescence are contagious. She “spreads the word” and brings the community of theater wherever she visits, from Austin, Texas to Sewanee, Shanghai Theatre Academy in China, from Minneapolis to the neighborhood near the Vineyard Theatre in New York City. And together she and her audience of all ages across the communities (from 15-90), of seasoned writers and playwrights and neophytes alike, experiment, grow and enjoy writing and reading plays during her intensives.

Her current playwriting boot camps (they used to take a week to do)  to make live theater a communal experiment much like its original creative form as a social, cathartic experience resonate today. They make complete sense especially at a time when artistic shallowness manifested in some entertainment forms has achieved a noxious superfluidity that really needs to die a death (my thoughts). 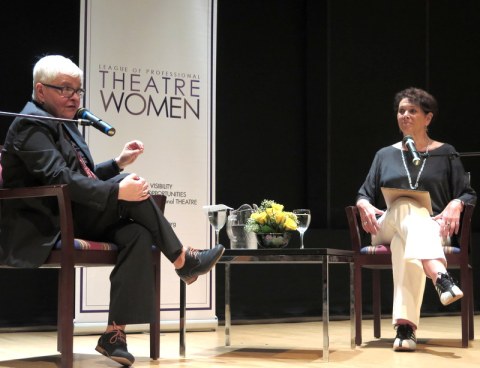 (L to R): Paula Vogel, Linda Winer, ‘Paula Vogel in Conversation With Linda Winer, in a collaboration by The New York Public Library for the Performing Arts at Lincoln Center and the League of Professional Theatre Women (photo Carole Di Tosti)

Some of the highlights of Paula Vogel’s discussion with Linda Winer, who was a wonderful interviewer, revolved around how she conducts her “bootcamps,” culminating in bakeoffs to spur on a fountain of creativity. In response to how her Pulitzer Prize-winning play Learning How to Drive was produced Off Broadway but never made the transfer to Broadway, she repeated an incisive comment from the past, “How often do the girls get to play with the big expensive toys?”

Now that Vogel’s Indecent and colleague Lynn Nottage’s play Sweat also transferred to Broadway from the Public Theater, Vogel laughingly acknowledged that for both of them, the expensive toys are “a lot of fun.” Vogel stated that when one acclimates to the house size, whether the play is in a 60 seat theater or a 200 seat theater, the effort and the intensity of  the work process is the same. Vogel joked, “The only difference is I’m not sleeping on a sofa bed.” Indeed, with Indecent, Vogel has graduated to a mattress and a bed, “more expensive toys.”

Vogel discussed the evolution of Indecent which was fascinating.  In her twenties she had read The God of Vengeance, by Sholem Asch, the play upon which Indecent revolves. She was mesmerized by the transcendent love scene between the pious Jewish father’s daughter and one of the prostitutes who works for him in the brothel below their apartment. When the world renowned Yiddish play was translated into English and brought to Broadway in 1923, the cast, director and producer were arrested for obscenity, even though some of the love scenes were cut. The play received a greater following and lasted 133 performances, but there was a trial after the play closed. The Court of Appeals overturned the convictions of the director and producer in 1925.

Twenty years after Vogel read Asch’s play, she learned that Rebecca Taichman was attempting to direct the obscenity trial for her thesis. Vogel learned of her work and pronounced her a genius. Vogel was inspired when she received a call from Taichman to collaborate on a play about the events surrounding the trial of Asch’s play. During their conversation Vogel had a lightening-like vision seeing a scene from the play which she stated “always happens” (it happened with Learning How to Drive) when she knows she can write a particular play. Having read up on Yiddish Theater, she told Taichman, “I think this is a play way beyond an obscenity trial.” Taichman was thrilled at her enthusiasm. Vogel admitted that this was around nine years and 40 drafts ago. 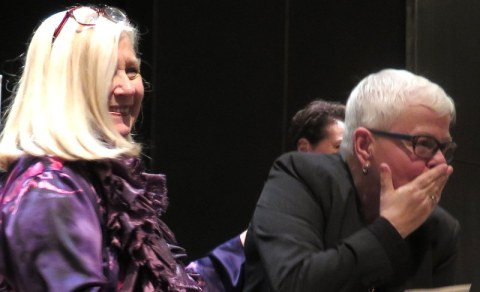 They workshopped at Sundance Theatre Lab (2013) and after many drafts and other workshops they put it on at Yale Repertory for the first time with the music, choreography and staging. Vogel joked the “flop sweat” was prodigious. Taichman’s and Vogel’s shirts were sticking to their backs. Since then it has moved on and was performed at La Jolla Playhouse in Fall 2015 and in May 2016 was produced at the Vineyard Theatre in New York City.

There is such enthusiasm for the production since Yale (2015) that the ensemble, the musicians, the stage manager and the assistants have remained together. As Vogel says, “We’ve all moved together as one.” This never happens with a production that transfers to Broadway. If it does, it is extremely rare. Vogel laughingly joked they have become a family. When two children were born during the evolution of Indecent, Vogel commented she has become like a godmother to both.

What a memorable evening! Vogel is about fun, about community about connections, about living and creating whatever comes next. That spontaneity and flexibility is like jumping off into the darkness, knowing you will land on soft ground at sunrise. The moment you think about the jump, you stop yourself. Vogel is not about stopping. She’s there already and beckoning us to join her. Why not?