It was a frightening time, the height of the Cold War! It was the division of Berlin into two sectors divided by a mammoth wall of concrete and barbed wire. West Berlin embraced everything economically viable through a market economy representative of Western culture.  East Berlin was controlled by the East German police (the hated Stasi) who were the engines of the government of the German Democratic Republic, a repressive communist country beholden to U.S.S.R. ideologies. How does one resist oppression and the repression of personal freedoms? How does one deny adherence t and subservience to the state? A Wall Apart reveals that the resistance was established prominently in two ways: rock music and love.

In A Wall Apart, a thrilling production which premiered at the New York Musical Festival (Music and Lyrics by Lord Graham Russell of Air Supply; Book by Sam Goldstein and Craig Clyde), we recognize that in the twenty-eight years which spanned the time of the Berlin Wall and the oppression it represented, that  rock music promoted the resistance against Communist tyranny. It did this subtly through its brash sounds and clashing, free-wheeling lyrics. Rock music expressed the yearned for liberty already inherent in the minds and souls of the younger generation. Its expression was life itself and in its clanging, smashing vibrations there could be heard the clarion call to revolt.

Maddie Shea Baldwin and the company of ‘A Wall Apart,’ NYMF (Michael Schoenfeld)

Perhaps more importantly, this production also reveals the power in resisting with love. In A Wall Apart we see that love and family unity ultimately triumph over allegiance to an oppressive government and the acceptance of its lies that subvert one’s humanity. From the opening song “Our City” we are reminded of the dreams of liberty that are inherent in every soul and which are the driving force that cannot be overthrown ,despite the attempt of governments to control that force through external structures and the threat of destruction.

This force is manifested in each of the characters, perhaps most symbolically through Mickey (Josh Tolle gives a powerful sustained performance throughout) whose rock band plays at The Bunker in West Berlin. The Bunker is the place of symbolic birth, life and hope in the liberty of the rock music of the West. Mickey’s band, The Angels, represents all the goodness of Mickey’s own character. It has led him to a loving relationship with Suzanne (Emily Behny’s portrayal is soulfully rendered) and collaboration with his brother Kurt (the excellent Jordan Bondurant). It is at The Bunker where the bond between Kurt and Esther (the superb Maddie Shea Baldwin) is initiated, and all seems to be going swimmingly except for the rumors that Berlin is being divided, revealed to Kurt by their brother Hans (Darren Ritchie gives a bravura performance as the Stasi who must negotiate the conflict between love and obligation to the state in his own heart). 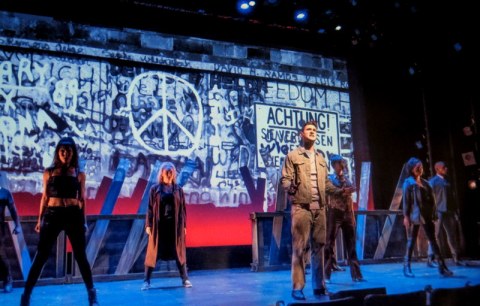 The most stalwart and loving of the characters is Tante (Leslie Backer is nothing short of astonishing). She is the glue that holds the family together; she mediates the troubles among the brothers and provides wisdom when Kurt and Mickey are caught in the East after the Berlin Wall is built and there is no getting out. Kurt and Mickey cannot abandon Tante who raised them when their parents were killed. Kurt especially is pressured by circumstances for he has left Esther in the West and will not join her but instead, joins the Stasi with Hans so that together they can put food on the table and obtain greater stockpiles of coal for heating. It is a devil’s bargain. 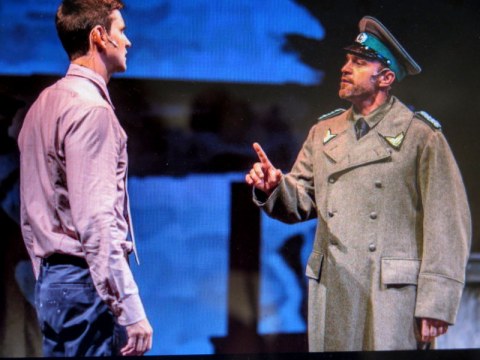 Material safety and support are not enough for Mickey who has to be free to express his being though his artistry and music. With Kurt’s information about which routes to take to get over the Wall, Mickey and a pregnant Suzanne make an escape attempt. What happens is irrevocable. And once again, we are reminded that individuals are willing to take grave risks when freedoms and personal identity are at stake. Ultimately, the risk is worth it for a difference is made in the lives touched by sacrifice.

A Wall Apart follows the resistance of the family and Hans’ conflict at having to perform the obligations of being a Stasi when his heart is elsewhere. It journeys with Kurt’s resignation from the Stasi and his affirmation to join the revolt from within East Germany to bring down the totalitarian structures external and internal which would oppress individuals’ rights to follow their own path. And somehow, the love between Kurt and Esther finds a way to grow though the wall divides them physically. It is intriguing how this occurs and as there is no spoiler alert here, you will just have to see the production when it moves to another venue (which it should) at some point in the future. 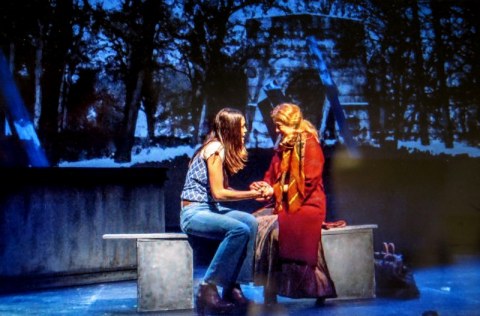 This is a finely wrought production whose music (Lord Graham Russell of Air Supply created the music and lyrics) is gobsmackingly good in its variety, its power and its touching poignancy.  The book by Sam Goldstein and Craig Clyde highlights the period. It is aptly enhanced through the staging, sets, props and visual projections of archived black and white photographs, and video newsreel clips of the time. The fictionalized chronicle of one family’s struggles through tremendous economic and social upheaval is not only a vital remembrance of the past, it is a reminder of the tyranny of walls and what might happen in the future if fascism (in the guise of communism or any ism) is allowed to rear its ugly head.

The company of ‘A Wall Apart,’ NYMF (Michael Schoenfeld)

The production is incredibly current. As we understand the uselessness of the Berlin Wall to serve its mission, we acknowledge that the inhuman, fascist separation of humanity is fear for fear’s sake. Fear is counterproductive, restriction retards innovation and stops the move toward progress. Regardless, freedom will triumph, love will triumph whether the resistance be through music or any means possible. Walls are symbolic of powerlessness in the face of humankind’s indelible desire for freedom and betterment. Barricades don’t work. Indeed, they inspire others to seek freedom despite the risk to themselves.

I would hope that this production sees a continuation elsewhere. It is that good especially in that its themes presented through the music and book are profoundly transcendent. Kudos to the skillful, adroit and versatile musicians (Jonathan Ivie, Matt Brown, Lavondo Thomas, Daniel Ryan, T-Bone Motta), exceptional ensemble and the uber talented Keith Andrews, whose direction and choreography was insightful and spot-on great. I loved this production, for what it says and how the design team, ensemble, musicians all shepherded by the director collaborated to say it! A resounding yes, you get my vote!  A must-see which I am counting on seeing again.