← The Resistible Rise of Arturo Ui, Starring Raul Esparza
Mike Birbiglia’s ‘The New One’ at The Cort Theatre →

Kate Wetherhead (as Neil Diamond) and company of ‘The Other Josh Cohen,’ directed by Hunter Foster (Cailtin McNaney)

Actually, there are more than a few Josh Cohens in The Other Josh Cohen. We discover this at the midpoint of the humorous, witty, superlatively clever production currently making its home at the Westside Theatre. With a versatile cast portraying many roles and Hunter Foster consummately directing, the show smashes audience funny bones with brio, and thankfully, what a pleasurable way to go!

Indeed, you will leave the theater grinning at the wacky plot which rings all too true. Rossmer and Rosen’s artful, humorous book, score and pop/rock songs push out irony after irony. Plot twist after twist haphazardly propel Josh forward in an unpredictable, crazy cue line of falling dominoes, and all the dominoes fall on him. The pleasing, satisfying result trails an unexpected romp following a single Jewish guy’s baleful time leading up to his dreaded Valentine’s Day blues and beyond. If we have been there, we enjoy laughing at the perspective of his plight. If we have been too desperate lining up partners and dates to avoid being there, all the more humorous.

Fearlessly, enthusiastically directed by Hunter Foster the show sparkles with good will and cheerfulness, a perfect treat for the holidays and even for every day. The show reminds us not to despair because of our own sorry humanity. Surely, no one, not even the privileged and the physically gorgeous can escape depression and unhappiness. However, as Josh Cohen proves, one will overcome such feelings by turning to the lighter side of life. Keep laughing! When you can laugh at yourself, eventually fate turns and circumstances improve. And if one builds on the former treasure-filled losses, fulfillment comes.

How Josh Cohen gets to this more heavenly state begins in a fateful, hysterical journey after a robber breaks in and steals the stuff in his apartment. Everything in Josh’s life worth having and enjoying gets stolen. Josh (Steve Rosen), and his alter ego narrator (David Rossmer), who always can be counted on to tell the truth, flashback to this singular time when Murphy’s Law abides in Josh Cohen’s life, and everything that can go wrong does go wrong in the worst possible way.

What more does one need when fortune’s ill wind smacks with crippling blows? Once again the musical’s theme arises out of every classic novel, play, short story, film. When you are down and out and have “nothing left to lose,” freedom reigns! And this freedom of being open to whatever the universe offers drops another delicious and unexpected event in Josh Cohen’s life. The other Josh Cohen!

Though Josh’s tragedies don’t quite rise to the level of Shakespearean comedies, we can identify. For all have feared sloshing in the mire of the “A” and “L” words (aloneness, loneliness). Somehow these feelings come full throttle in youth and we feel them with all the terror and hurt of abandonment, and we are there with Josh, pulling for him lifting up Josh’s smile-through-the-clouds pain. 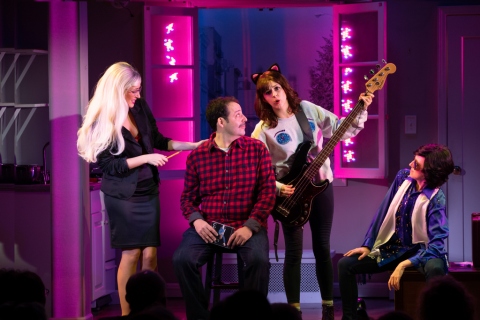 Certainly, lonely, single, young guys will enjoy Josh’s various griefs, annoyances, emptinesses, lows and highs. So will lonely, single, old guys. Josh indicates he feels the heart-breaking gnaw of being without a partner most acutely on Valentine’s Day. Yet, through our identification we have no problem laughing at him when every date possibility blows up in his face. Truly, Josh becomes his own worst enemy. Is he intentionally so lame he wants to flame out? Does he want to feel sorry for himself having gotten used to spending lonely hours binge eating candy and ice cream in the aftermath of his Valentine’s Day emotional massacre?

Turns out, no! Josh’s circumstances switch when he receives a wonderful letter. And since no spoiler alert follows, you must see this truly happy-go-lucky production to find out how wrong becomes right in Josh’s life. Sometimes tragedy can be comedy in disguise, and that might actually lead to love!

I particularly enjoyed the versatility and tremendous talent displayed by the actors. Indeed, they sing, play a host of instruments, cavort and express the joy that makes this musical fly. Kudos to Kate Wetherhead, Louis Tucci, Hannah Elless, Luke Darnell and Elizabeth Nestlerode. Though all the songs sparked vitality, I particularly enjoyed “Neil Life,” “Samuel Cohen’s Family Tree,” “Hang On,” and “Change a Thing.”

I love Neil Diamond. I am happy to see that filmmakers and playwrights feature the spiritual grace and hopefulness of his songs in their work. Just great.

The Other Josh Cohen runs with no intermission at the Westside Theatre (407 West 43rd) until 24 February. You can purchase tickets at their website.

← The Resistible Rise of Arturo Ui, Starring Raul Esparza
Mike Birbiglia’s ‘The New One’ at The Cort Theatre →