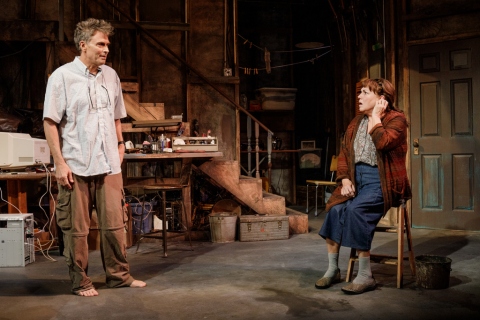 Theresa Rebeck’s Downstairs is a hybrid drama-mystery, a thriller with sly, humorous overtones. As usual the playwright’s particular and complex characterizations startle with their humanity and angst. And the myriad themes that Rebeck tackles in Downstairs reverberate with currency.

Directed with acute precision and depth by Adrienne Campbell-Holt, and starring siblings Tyne Daly and Tim Daly as well as John Procaccino, Downstairs is a tour-de-force about relationships, wickedness masking as truth, second chances, hope, and the interior and unseen ebb and flow that happens in all evolving souls.

Written especially for the Daly siblings, the play exudes cleverness and wry import. She opens the intriguing story on the trash-heap of an unfinished basement, a workshop cellar with a couch and a few tables. Teddy (Tim Daly’s strikingly alive portrayal uplifts with power) emerges from the bathroom. As he carries on with the morning ritual of waking up, making coffee, and brushing his teeth, we understand that he has slept in the basement and is perhaps living there. Then Irene (the exquisitely versatile Tyne Daly, who is just extraordinary in this portrayal of the mousey, oppressed wife) comes down the basement steps and confronts him. She attempts to understand why he needs to be staying in their cellar.

From their conversation Rebeck reveals their prior estrangement and background circumstances since their mother died some years before. Notably, the forthright Teddy reveals his upset that their mother left Irene with the inheritance, which he deems unfair. They fill their discussion with questions that neither quite answers. Irene refuses to discuss how Teddy became disinherited. This exchange unsettles us. Their tense interplay appears shows us siblings who at this juncture cannot be described as showing good will toward each other.

Tyne Daly, Tim Daly in ‘Downstairs’ presented by Primary Stages at the Cherry Lane Theater in New York. The play, by Theresa Rebeck is directed by Adrienne Campbell-Holt and also features John Procaccino (not pictured) (photo by James Leynse)

Nevertheless, as they continue Teddy discloses that he has been poisoned by malevolent people at work. His truthful admission, though bizarre, opens Irene’s heart. She shifts from being defensive to accepting her brother’s plight and wanting to help him.

Throughout these initial exchanges, we make assumptions about Teddy’s mental and emotional condition and life’s circumstances. Evasive and scattered, he appears to have suffered a breakdown. Surely, he faces a crossroads in his life, especially if his sanity remains in question. But the brilliance of Downstairs is that nothing is what it appears to be. Neither the situation, the characters, nor the development of the conflicts play out the way we anticipate. Rebeck takes us for a dangerous ride fraught with suspense which remains far from the mundane family story we thought we had signed up for.

For example, the reconciliation between Irene and Teddy after their mother died is anything but mundane. Irene’s marriage and financial situation, which initially appear comfortable, normal, and steady, are a deception for numerous reasons that Rebeck reveals with adroit, painstaking details of characterization. We become enlightened about Teddy’s erratic “craziness” and quirky genius. And the estranged relationship between the siblings has little to do with each of them. Indeed, as the present veneers slip away and they connect with their deeper emotions, we discover the real culprit of their alienation.

Their inner emotions drive the energy and action. The actors craft their portrayals so carefully and sensitively, we identify and hope for Irene and Teddy. As they confess their truths to each other, Teddy listens and supports Irene’s confrontation of the lies within herself so she may heal. In her evolution, enlightenment, self-deception, and growth, Tyne Daly’s Irene soars. Her gradual empowerment with Teddy’s help thrills and engages us. Tim Daly’s Teddy displays individuality, bravery, and truth that can call down deception, corruption, and evil, uplifting us. Together, they beautifully manifest their eventual understanding that the ties that once bound them can be reconstituted. And this is so even though the world and the wicked have worked overtime to break their spirits and wreck their souls.

John Procaccino’s amazing portrayal of Gerry, Irene’s husband, creates the perfect foil for Irene and Teddy. He inhabits Gerry with sensitivity, finding the character’s motivation without going for result. Procaccino’s mastery of Gerry’s sinister presence is authentic and believable. This is not a spoiler. You will just have to see Downstairs to marvel at how these superlative actors work together to breathe life into Irene, Teddy, and Gerry.

In this wonderful production, the unexpected peeks around the corner of every scene. By degrees the story goes through many turns and twists. The more the truth of Irene’s marriage is revealed to her by Teddy, the more open she becomes with her brother and he with her. Rebeck gradually unfolds the mysteries. In the last scenes we finally understand what has separated them from the love they once held for each other.

Throughout this tautly suspenseful work, the playwright captures seminal themes. These include women’s empowerment, familial love, the vitality of childhood bonds, and the saving grace of compassion and goodness. There are numerous messages that echo for us today in the cultural morass between reality and fabrication, truth and lies, visibility and invisibility. I especially enjoyed the moment-to-moment, slow reveal of the struggle between good and evil, enlightenment and cover-up, and the extent to which we betray ourselves with self-deception. The title symbolizes and brings together many of these rich them

Downstairs is a must-see for the sterling performances and for Adrienne Campbell-Holt’s directorial craft. Each of these sends you to the edge of your seat and equally touches your heart. Look for the profundities that will wash over you long after you have left the Cherry Lane Theatre. Kudos also go to Narelle Sissons (Set Design), Sarah Laux (Costume Design), Michael Giannitti (Lighting Design), M.L. Dogg (Sound Design), and Leah Loukas (Wig Design).