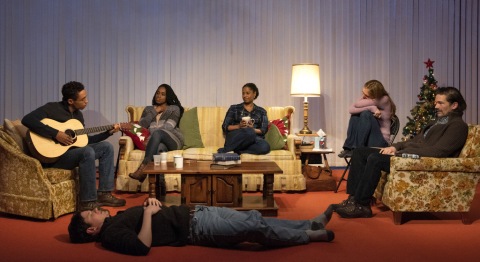 How do we tell if our indignation for another’s plight isn’t our own misdirected rage that we ignore at our own peril? How is the healing process from childhood traumas that manifests through addiction to alcohol, drugs, sex and “acting out” initiated? Do those rehabilitating themselves recognize when the process evolves into wellness? How do such individuals recognize the journey to healing? Do they understand all that the arduous process entails before they attempt it? Or do they just move head on and try to change before they are ready because the culture and their anti-social behaviors demand it?

Atlantic Theater Company’s Blue Ridge written by Abby Rosebrock and directed by Taibi Magar raises these questions and many more. The play is superb, but does fall a bit short on one element, despite the fine performances by the ensemble and the excellent production values. The weakness evidences in Rosebrock’s sometimes confounding redirection of focus in examining the protagonist Alison (a nuanced, and layered performance by Marin Ireland whose accent is, at times, ill-executed because she quickly glosses over important, profound lines). Nevertheless, Rosebrock’s work is exceptional in the service of revealing themes which initiate organically from her characters and their interactions with each other, as they rehab in a group home setting. 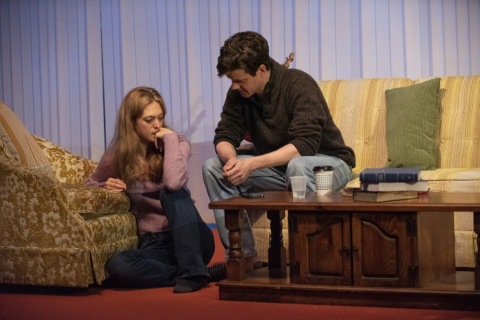 Currently at the Linda Gross Theater, Blue Ridge takes place at a religious rehabilitation retreat in the gorgeous mountains of western North Carolina (Appalachia). Everpresent are the fundamentalist tenets of Christianity which the characters attempt to espouse and practice. There, at St. John’s Service House, the individuals who have been interviewed and accepted for placement, seek God’s love, forgiveness, joy and peace, reinforced by Sunday church, Wednesday Bible Study, meditation, outside jobs at a pool store and therapeutic group conversation.

However, the process of moving toward wellness is not as easy as it may appear with prayers and Bible work. There must be a complete revolution of one’s soul, a very tricky circumstance indeed; for what is the soul? What is sin? What is the devil? And how do Christian teachings answer psychological traumas? As a key theme which Rosebrock brilliantly reveals, dealing with trauma involves more intricate and complex understanding on a personal level for those who experienced trauma. This involves a life-long process and everyone who undergoes it won’t find any marked yellow brick road at the end of the rainbow. But a good first step is remembering and confronting the trauma alone and/or with expert guidance and love. 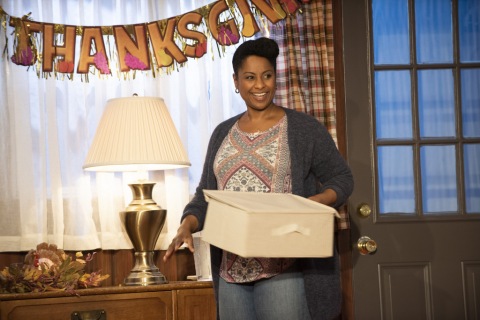 The characters, some with overseeing functions like Hern (the pastor played by Chris Stack) and Grace (social worker portrayed by Nicole Lewis) help others, and with empathy and service, seek to rehabilitate themselves. Those, like Alison (Marin Ireland) Wade (Kyle Beltran) and Cole (Peter Mark Kendall), who have been accepted into the program, hope to correct problems which have manifested in self-destructive behaviors. If such behaviors continue, the individuals will be sent to restrictive settings (jail or psychiatric lock up), if they do not improve and heal. Other characters like Cherie (Kristolyn Lloyd), voluntarily enroll in the program. Cherie knows her own soul’s weaknesses related to her family’s and her own alcoholism. Though she is self-aware, she is blind to her other weaknesses and these set her on a course which may lead to relapse if not confronted.

Rosebrock introduces us to the principals in the first act which largely is humorous exposition to set up the dramatic developments and the climax of the second act. The characters are representational, some with individual problems that run deep but whose cause remains unknown. Their outward issues range from alcohol and drug addictions to anger management issues identified euphemistically as “intermittent explosive disorder.”

Central to the characters’ improvement and social reconstitution is the Wednesday Bible Study where we first meet the others and Alison, a teacher who lost her way and her job because of anger management issues. Alison chose to go to rehab rather than jail for destroying her principal’s car; ironically, he also was the man she “loved.” Marin Ireland’s portrayal reveals Alison’s fierce, hyperbolic and frenetic personality which masks the underlying wounds which Rosebrock intimates but doesn’t clarify by the conclusion of the play. 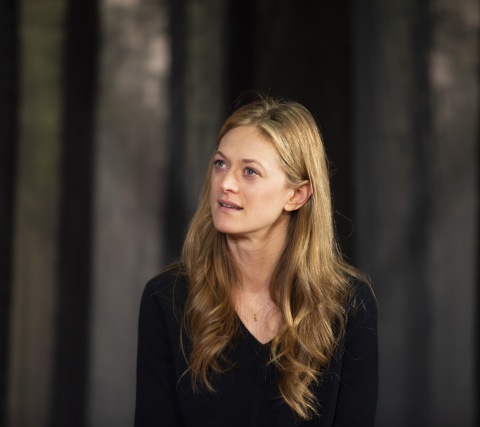 A word about the character of Alison, who is the linchpin of Rosebrock’s work. One wonders if the play’s dynamism might have been strengthened if Rosebrock had more clearly and with dramatic and active plot points heightened the true issues that fomented Alison’s life-long devastation. At the beginning of Act One, to introduce herself, Alison glibly races through the lines of a song “Before He Cheats” by Carrie Underwood which parallels her behavior that landed her in rehab. We understand that she refers to herself when she quotes: “by this point all the accumulated pain an’ hopelessness, an’ annihilatin degradation, uh’bein a woman in this sexual economy’ve juss… racked the speaker’s brain and body, like a cancer.”

However, we remain unenlightened about the how and the what, even until the end of the play when Wade (Kyle Beltran) confronts her with these lines. Rosebrock never delineates the specifics of Alison’s annihilation and this is key to feeling empathy for her. Though Ireland does a yeowoman’s job in getting us to Alison’s heightened emotional state, our identification with her is muted and unsatisfactory. Perhaps, this is because we do not understand why she hurts so on an individual level. It is not enough to call in the cultural memes as her revelation. The facts and specifics matter; they resonate. But what are they? Thus the fullness and the power of Alison’s emotional state and whether or not she has achieved self-realization to move on to the healing process is opaque. We are not even “seeing through a glass darkly” where she is concerned. 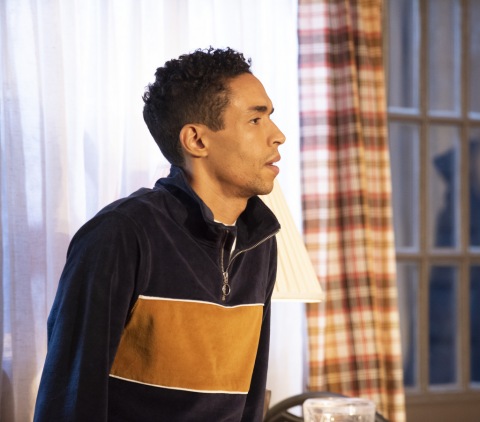 The play turns on Alison’s integration into the program and her recovery. The irony is that she does the work in achieving her external goals and is reinstated as a teacher. However, she doesn’t begin to expurgate the underlying morass of pain in her soul while she is immersed in her sessions and interactions with Wade, Cherie, Hern, Cole, Grace. Indeed, because her self-realizations remain superficial, she becomes the catalyst that exacerbates conflicts and escalates issues for Cherie, Hern, Cole and Grace. As Cherie suggests, Alison blows up a set of circumstances via her own projections. As a result, everything changes for the characters.

Furthermore, Alison doesn’t understand how to get around the humiliation of the negative impact she has afterward. Ironically, though “all have sinned and come short of the glory of God,” by the end of the play, we see  though there are apologies, there is no closure, no forgiveness, no resolution. Each of the individuals is forced to work by himself/herself as the “family” goes its own way in separate directions.

The only one who attempts to deal with himself in an authentic way is Wade. He tries to “make amends” for his not dealing with Alison on a deeper level than he he should have. At the conclusion Wade’s conversation with her is a trigger. However, we do not understand the specifics of the how or why. The rationale appears that she went through something in childhood. So did we all. We are ready to empathize, but are never quite given the chance, a fissure in the play’s development and characterization of Alison.

Rosebrock chooses to develop the play so that the conclusion becomes Alison’s flashpoint of experiencing the pain of her buried, bleeding wounds. The play ends with her emotional breakdown as she appears to allow herself to feel on a deeper level.

This is a risky choice in developing the play.The outcome remains unsatisfying and uncertain. The character Alison, whom we’ve come to accept and appreciate, is a cipher and a conundrum to herself and us. Though Alison has achieved the beginnings of a deep emotional release, Rosebrock sets her spinning in limbo. Any epiphany she might experience is mitigated by questions and doubt.  We do not know where her emotional release will take her, nor what specifically it is connected to. 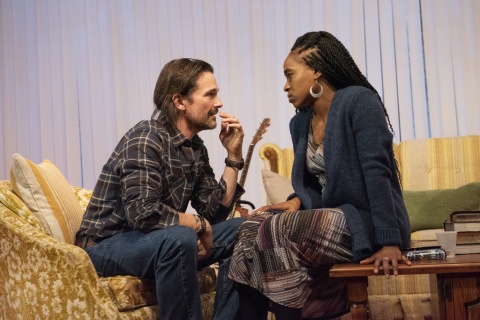 If we did know more about what is “driving her to hydroplane” (a wonderful symbol of her dangerous emotional state), we might have greater empathy. And indeed, if she achieved the makings of an epiphany, we would understand her. The irony is that her emotions belie victimization but we do not understand. Might that have been dramatically revealed to deepen her characterization?

Magar’s direction aptly shepherds the cast as they portray how each of the characters attempts to make their way through their own personal trials that emerge after Alison blows apart the peaceful interactions of the “family” in the second act. These conflict scenes engage us. In the confrontation scene between Alison and Cherie toward the end of the second act, both Lloyd and Ireland hit their target. Their authenticity reveals the extent of Alison’s self-absorption and her misery which spills out onto everyone in the group, especially harming Cherie. This scene is one of the strongest in the play. There are others that work equally well because of fine ensemble work, direction and staging.

A word of caution. For some actors, the North Carolinian accents were a distraction that occluded rather than clarified. Whether this was because of character portrayal or under-projection is moot. However, because Kyle Beltran, Kristolyn Lloyd, Peter Mark Kendall (to a lesser extent Chris Stack) didn’t overrun their lines and their projection was a sounding bell, their accents sounded unforced.

The play is a worthy must-see for the performances (despite a few rough patches with accents) and for  Rosebrock’s metaphoric writing, humor and intriguing thematic questions. Blue Ridge runs with one intermission at the Linda Gross Theater on 336 20th Street between 7th and 8th until 26 January.  For tickets go to the website.