← The Mindblasting Ethan Hawke and Paul Dano Cave to Primal Hatreds and Private Desolations in Sam Shepard’s ‘True West’
‘Lynn Nottage in Conversation With Elisabeth Vincentelli,’ a NYPL and LPTW Event: Part I →

‘The Dance of Death,’ Conor McPherson’s New Version of August Strindberg’s Take on Marriage at CSC 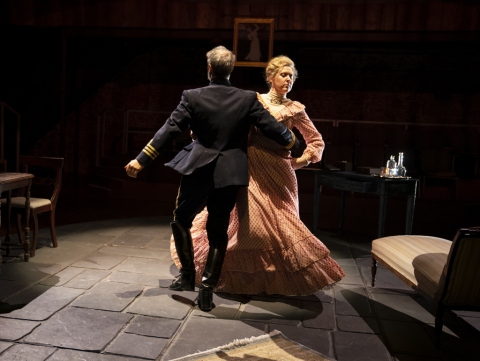 Historically, marriage has been an economic arrangement. It will continue to be so for the upper classes who understand the necessity of securing their financial legacy for posterity. Emotions of love and caring might be a by-product, but they have been secondary considerations for the wealthy who remain keen-eyed and empirical when it comes to their fortunes. However, the middle class prompted by myth and fairy tale, believed and still believes in love and marriage, stoked by romantic films, songs and lucrative cultural artifices that reinforce the notion that marriage is an imperative for the straight as well as the LGBTQ set. Cultural consumerism pivots on romance and everything in between to culminate in the big white event. When government involvement and the legal system enforced marriage as an entrenched cultural institution with privileges and prohibitions, for good or ill, everyone was impacted and still are.

Marriage folkways and the idea that the ubiquitous institution brings comfort and joy to the bonded couple is turned humorously on its head by August Strindberg (1849-1912) in The Dance of Death. Strindberg’s play at times may be difficult to balance in its tenors between tragedy and comedy. Conor McPherson has transformed it into the most hysterical of blackest comedies about what may be for some, the bleakest of social arrangements in his new version which currently runs at CSC in an August Strindberg repertory (Mies Julie, The Dance of Death). McPherson, an award winning playwright is noted for such superb works as Shining City, The Seafarer, and most recently, Girl From the North Country.

McPherson easily leaps into and out of the precipices and crevices of irony, sarcasm and sardonic interplay in this new version. Many of McPherson’s works produce uncanny grotesques that meld fear, surprise and humor and always engage, startle and most assuredly enthrall. What he has accomplished with Strindberg’s The Dance of Death is the best of McPherson.

In this new version the extraordinary relationship of bondage, fear, familiarity, loathing, quasi affection and sometime tolerance between Edgar (a Captain in the military) and Alice (a former stage actress) plays off Strindberg’s characterizations of the married couple. However, in McPherson’s iteration, the dialogue skips along in a rendering that is crisp and bold. The pace and clarity of the character and situation creates a dynamic that facilitates the humor and flat out comical brutality of husband Edgar (Rich Topol) as he jousts, using sword wit and hyperbole, with wife Alice (Cassie Beck) who as a formidable opponent dodges and wounds him with his every thrust.

The play takes place on an isolated island in a converted fortress that once housed condemned prisoners. The island surrounded by little other than the military regiment housing and social life related to a few high-placed neighbors. During the course of a few evenings, we discover the boundaries of this couple and what they fancy. Edgar is an unsuccessful skinflint who is barely able to perform his military duties as an older man in his 60s. As Edgar Topol reveals his incredible versatility, flexibility and vitality as he negotiates Edgar’s infirmities and attempts to dance, defying the illness that would swamp Edgar and remove all the luxuries and pleasantries of life, for example alcohol, a cigar, women. Topol’s ironic delivery is pitched for humor directed to deride and deliver underhanded insults at Alice. His performance is masterful.

Cassie Beck as Alice stomps down Edgar’s attempts with well-paced, clear, clipped delivery that is modulated for its utmost sardonic injury to Edgar’s ego. She transfers moods and graces with immediacy and vitality most producing audience laughter. Topol’s Edgar and Beck’s Alice are each other’s match and as the play progresses we note that their seething hate graduates to finer and fiercer levels as they insult, then bait and switch to more excoriating repartee. They are in earnest and desperate which makes the situation even more comical, for they are not playing for humor, they are clawing to get out of prison and wounding their jailer at every turn.

With the shepherding of the incisive and able director Victoria Clark, the actors reveal their characters and display them in full. We completely understand by the end of the play that Edgar’s and Alice’s seriously humorous, witty invective has been fined-tuned over their twenty-five years of marriage into an incredible waltz that appears more like a Fandago, a courtship dance that is anything but. The irony is that we realize these two devils have somehow worked out and in a perverse and sadistic/masochistic way configured the dance steps which no one watching except for themselves revel in and enjoy.

Ah! Edgar and Alice embody the pleasures/ horrors of being married to someone they despise, yet are too embroiled in knowing familiarity to consider either killing or leaving. This indeed, as McPherson/Strindberg shoves into our laughing faces suits the marriage vows,” ’til death do them part.” The problem is that though Edgar is old, and Alice is 15 years his junior, Edgar totters between mini seizures, black-outs, obstreperous dying-ins, visions of an old woman who may or may not symbolize death that no one sees but him, and energetic dancing which he vigorously enjoys, then collapses to, yet, Edgar doesn’t die. For her part, Alice repeatedly announces in bell-like tones her wish for him to die, her relish in having him die. And that she will be thrilled if he hurries up and does it. How monstrous! How funny! How can we laugh? Well, indeed, how can we? These two maul each other with finesse which because of McPherson’s ear for language manages to be damn hysterical.

When Edgar’s “friend”/Alice’s cousin Kurt (the most excellent, equally riveting Christopher Innvar) enters into the fray, he too becomes bloodied. It has been a hiatus of 15 years since he’s seen the devilish couple,. During that estrangement he obtained money but went through incredible personal trials which he weathered, the circumstance of which we learn as he is brought into their “fold.” The mysteries of affairs (Kurt’s wife was intimate with Edgar and Alice was intimate with Kurt) are not clearly drawn but they are delicious to consider as we note that the age of Edgar’s and Alice’s daughter coincides with the last time Alice saw Kurt.

The beauty of dynamically throwing Kurt into the mix is that his character remains fluid. On the one hand he must see his cousin Alice and Edgar since he will be working with him to set up a Quarantine station on the island. On the other hand, Alice paints him into the corner of rescuing her from her dire marriage. Yet, Kurt is friends with Edgar, though he has had an affair with Alice. The complications and contradictions abound with glorious humor as the characters trip over their own logic and irrationality, confound themselves and each other.

The situation is exacerbated when Alice tells Kurt that Edgar will be locked up for embezzlement as she has blown the whistle on him so that she will finally be able to free herself, divorce Edgar and be with Kurt. This is no spoiler alert. Importantly, the philosophical wisdom and underpinnings of Alice’s relationship with Edgar are revealed by the end. And we understand that perhaps even in the afterlife, these two will be scratching, slicing and impaling each other on their latest witty barbs for the love of the process and the fact that each has bestowed the good will on the other to dance in this way.

Strindberg/McPherson’s themes are playful, trenchant, profound, socially satiric. Of course the target both playwrights hit is loveless marriage, loving marriage. Couples tend to stay in long-lived marriages for they have found the “way” to be together. Everyone’s “way” is different. If there is no “way,” there is divorce or immediate death. The notions of death in life and the chain of death being wrapped around couples that can only be severed when one or the other dies may be a dangerous one. In how many marriages over the centuries has the one spouse dispatched the other becoming the inheritor of wealth, or lands or freedom unjustly, malevolently?

Perhaps Edgar and Alice are more comforting in their outrageous, authentic and honest antics. Nothing surreptitious there. With Edgar and Alice, after each “dance of death” where they have at each other in their death matches of soul and ego wounding, there is no victor standing. The resurrection comes when they live to the next day to experience some peace and reconciliation until the next bout of rancor and explosive verbal violence. In between they can laugh and that we can laugh at them is the recognition that the human condition is so strange and tragic as to be a cosmic joke. And if at the end of the play, the end of this truly marvelous production, we can laugh and have joy, that is miraculous.

This version by McPherson incredibly directed by Clark with the measured and brilliant performances by Topol, Beck and Innvar is a complete treasure that you must see. The Dance of Death currently runs with no intermission at CSC (136 East 13th Street) until 10th March. It should be extended for its actors’ clearly expressed intentions out of which the hysterical comedy arises, for McPherson’s crackling, gobsmacking version and appreciation of the genius of Strindberg’s work, for Clark’s concise staging and direction. You can purchase tickets at the CSC website.

← The Mindblasting Ethan Hawke and Paul Dano Cave to Primal Hatreds and Private Desolations in Sam Shepard’s ‘True West’
‘Lynn Nottage in Conversation With Elisabeth Vincentelli,’ a NYPL and LPTW Event: Part I →