”Merrily We Roll Along,’ Strong Performances, an Ebullient, Sleek, Shining Revival at Roundabout

The Company of ‘Merrily We Roll Along,’ presented by Roundabout Theatre Company and Fiasco Theater. Book by George Furth, Music/
lyrics by Stephen Sondheim, directed by Noah Brody (Joan Marcus)

Dramaturgs are most probably familiar with the tribulations of the 1981 version of Merrily We Roll Along, book by George Furth, music and lyrics by Stephen Sondheim, produced by Harold Prince. The musical, based on the titular play by George S. Kaufman and Moss Hart essentially extols youthful ambitions and  artistic dreams which may become subverted by practical considerations once success and financial security are achieved. The original Furth/Sondheim musical lacked measured focus but was noted by some for its wonderful score. Though the show closed after more previews than performances, it was nominated for awards and won two.

The concepts highlighted by Sondheim’s music and lyrics are timeless and made especially so in their reworked version of Merrily We Roll Along (1994) which grounds the adapted iteration presented by Roundabout and engendered by the sterling efforts of Fiasco Theater. From the superlative, exciting performances by a “gang of six” headed up by the three principals, Jessie Austrian, Manu Narayan and Ben Steinfeld and directed with precision and adroit sensitivity by Noah Brody, this thematically poignant production resoundingly works (rare praise coming from a lukewarm Sondheim fan). I found the energetic pace, incredible plot structure and imaginative set design that paid tribute to theaters of the past (and Sondheim’s work) delightful and funny. Altogether, the artistic design, staging, costumes, sound design, and the ensemble’s superlative acting and singing unfold seamlessly in the service of uniquely structured storytelling that many should appreciate.

Certainly, the sheer number of theatrical props on library bookself-style floor to ceiling walls covering three sides of the stage intrigue. The props, haphazardly arranged appear akin to a “behind-the-scenes” look into symbolic take-aways of the characters’ lives. The theatrical design and tropes  provide a fascinating backdrop to the action, the arc of which spins linchpin events in a reverse chronology from 1980 to 1957. It is a period of time which encompasses seven transitions to the precipitating incident when the three protagonists (Mary-Jessie Austrian, Charley-Manu Narayan, Frank-Ben Steinfeld) first meet on a rooftop that turns out to hold a lasting symbolism for them. The flashbacks to crucial years, highlight the melds and fractures of these immensely talented individuals whose dreams, personalities and synergies help to solidify an artistic fount of creativity. It is from this fountain of creativity and their interlocking aspirations that their successes spring forth. 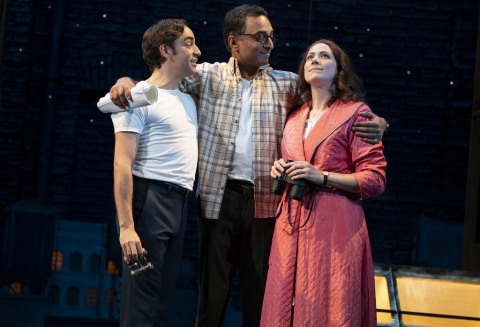 However, without their symbiotic energies weaving and flowing together, the fountain dries up. As we follow the events backward in time, we note the progression and conclude that the waters that once revived them dissipated as did the joy, hope and vibrance of creative, encouraging friendship. It is this that Frank remembers at the outset of the play and which is the initiating incident of all the scenes that flow back into the past. We shadow Frank as he relives and remembers key times and places that led to his separation from his friends.  The three when we meet them in 1980 are successful and rest on their laurels. However, their greatness which is embedded in their friendship with each other is behind them. It is this tri-parte greatness that Frank (the excellent Ben Steinfeld) seeks in the beginning of Merrily We Roll Along.

And it is this greatness that Frank understands he has lost in an epiphany at the conclusion of the extended flashback which switches back into the present. He knows when his friendship ended with Mary (Austrian is absolutely wonderful) and Charley (Narayan brings down the house with “Franklin Shepard, Inc.”), that he lost the best part of himself. Whether he makes a determined effort to rekindle his relationship with Mary and Charley to recapture what they had is uncertain and sadly, not even alluded to as the lights dim.

The play’s structure as we chronicle the journey back to their first sparks of friendship is revelatory. When we witness the older individuals and their various partners at the outset of the play, these successful people are “played out,” grossly unspectacular and unoriginal. We do not relate to them, and feel disengaged from Frank’s “matter-of-fact” attitude as he sings “Rich and Happy.” But the song belies the truth and he and others question how they arrived at their aggressive and truly unhappy, unfulfilled state. There is a “movie-like” rewind (a transition which segues into the past), and the characters get to experience what most of us don’t get to see: the pivotal events that cause them to be where they are, when they don’t wish to be there at all.

In the brilliance of the play’s structure we chronicle Frank’s and the other’s flashback to the greatness they lost with various songs (“Like It Was,” “Franklin Shephard, Inc.”, “Old Friends,” “Growing Up,” through to “Our Time”). With the songs and transitional refrain (“Merrily We Roll Along”) taking us to their former times, the characters fill out and become personable individuals with whom we readily identify. Because of the ensemble’s acting skills and the director’s attention to detail, we joy to their humanity and feel ebullient with them, witnessing how they “made it.” However, we realize there is a caveat: success is another type of failure if one allows it to overthrow priorities and values that are based in goodness.

When we finally witness Mary’s, Frank’s and Charley’s serendipitous meet up on the rooftop when they solidify an uncanny unity, we make the connection to their twenty years later selves. Yes, years later they have “grown up.” But they have sacrificed, not their youthfulness, but their hope.  They’ve lost the eternal innocence that initially ignited their artistic ambitions and happiness when they “found” each other.

It was this eternal innocence that synergistically drove them, encouraged them, sustained them through the “hard” years before they achieved success. However, after each becomes successful in their own right, they allowed their friendship to be sacrificed on the altar of celebrity. Their triumph is hollow, their latter-day efforts are uninspired. It is an incredible irony that in “the seeking” is the fun and adventure. With success comes another myriad of torments. And without your friends to hear you out and go through the miseries with you, it is especially painful. So it is for Mary, Charley and Frank.

To round out the acting “gang of six” are Brittany Bradford who portrays Beth, Meg and K.T. Her “Not a Day Goes By,” is just great in its emotional power and resonance. Paul L. Coffey and Emily Young are excellent as foils to each other portraying the producer, husband, actress, divorced and devolved. Carefully they authenticate the specifics of these individuals that confound Mary’s, Charley’s and Frank’s friendships with each other.

Coffey’s upward development of Joe from failed producer to top of the world success is great (rewinding from the present to the past). Young’s upward development of neophyte actress and wife, who throws over Joe for Frank is excellent. The ebb and flow of success and failure in the marriages and relationships between Frank, Beth, Gussie, Joe characterizes the show business life. Meanwhile, Charley and Mary manage to hang on to their steady state (though Mary never marries). The contrast between the two groups is fascinating. It is clear how the demands of the producing/acting/songwriting lifestyles overthrow stability as these characters swim and tread water in an ever-changing sea of transitions.

Fiasco Theater’s re-imagining of Merrily We Roll Along is sharp, engaging, humorous, heartbreaking. The themes of friendship, regret and loss examined using flashbacks are clearly drawn through the music which is dynamic and exceptional. Sondheim touched upon the ineffability of friendship’s innocence and beauty and used that to drive the show forward into the remembrances of the past. The transitions beginning with the “Big Rewind” are excellent as the “gang of six” “rolls merrily along further into the convoluted turning points that got them to where they are decades later.

Some numbers are riotous, for example Austrian’s transformation into her thinner, unalcoholic self. Her vomiting up the booze “in the rewind” is super smart and hilarious.  “Bobby and Jackie and Jack,” a song Charley, Beth, Frank and Mary perform at the Downtown Club is fun, and nostalgic for those who remember the Kennedys. The excitement of “It’s a Hit!” sung by Joe, Charley, Frank, Mary and Beth when their show is a success is exuberant and effervescent. And “Old Friends” is just spectacular. emotional and stirring. It is the kindling of the show’s fiery brightness.

Most importantly, the cast authentically, magnetically fulfills in their various portrayals what Sondheim and Furth wanted to express: themes about friendship gained and lost, the synergies of creativity, the wonder of manifesting the creative process, and the corruptions that undermine the best of one’s self, for example prizing financial gain above all else.

The production is complex and rich. It should be seen, especially if you saw another version of Merrily We Roll Along. Fiasco Theater’s smashing adaptation is not to be missed. And if you didn’t see an earlier version, be happily enthralled while enjoying the depth of this production which is a clever, profoundly poignant  “every-person” memoir of gaining and losing oneself. Finally, the work is a paean to friendship which in this show starts in the forever and ends up with protagonist Frank and the others staring into the abyss of regret. Is there a warning here in the “Age of Trumpism?”

Merrily We Roll Along runs without an intermission at the Laura Pels Theatre, Harold and Miriam Steinberg Center for Theatre (111 West 46th Street) until 7 April. You can purchase tickets at (212) 392-6308 or at their website by clicking HERE.