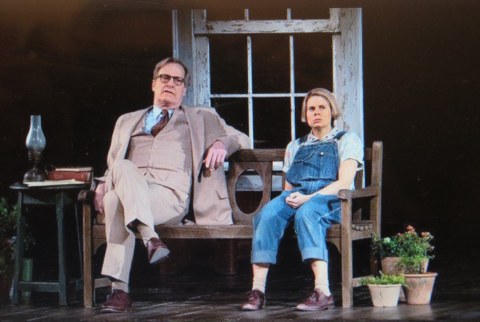 Harper Lee won the Pulitzer Prize for To Kill a Mockingbird. If there had been a Pulitzer during the time of the Civil War, Harriet Beecher Stowe would have been awarded it by the North for her incredibly heartfelt and powerful Uncle Tom’s Cabin. President Abraham Lincoln upon meeting Harriet Beecher Stowe greeted her with this famous quote, “So this is the little lady that started this great war.” At the time To Kill a Mockingbird slammed onto US bookshelves in 1960, its effect has been no less dynamic 100 years after the Civil War. As a full frontal expose of egregious Southern racism, the novel justified white support of the  Civil Rights Movement.

Both Lee and Stowe impacted the culture of their time indelibly and irrevocably. And there is no going back regardless of how much certain groups long for the “nobility” of being at the top of a social structure ratified by “that peculiar institution” whose remnants live on today in the Trumpist era of right-wing white supremacy, the KKK and Neo Nazism hiding billionaire fascism.

It is to these modernized remnants that Aaron Sorkin gives obeisance to, in his “new” To Kill a Mockingbird which tweaks elements of Lee’s novel more than a little. However, the purpose of the production is grand and our political and social currents scream out for such a tweaking. The script’s divergence does so in the spirit and dynamism of the novel to serve theatrical spectacle, enthrall the audience and align the themes to emphasize our society and its once hidden hypocrisies now brought into the fore by the White House. Whether or not this is a positive or a negative for understanding the novel’s role as a vital imprimatur against racism for its place and time is moot.

The changes are Sorkin’s decision and codified within the heading of “A New Play.”  And though as a former teacher and Adjunct professor who is a Mockingbird purist, I “get it” and understand the primal necessity of the how and why Sorkin made certain adjustments. I will save the discussion of Sorkin’s changes and how they slide away from Lee’s intentions in another article.

Jeff Daniels (in the background L to R): Will Pullen, Celia Kennan-Bolger, Gideon Glick in Harper Lee’s ‘To Kill a Mockingbird,’ a new play by Aaron Sorkin, directed by Bartlett Sher (Julieta Cervantes)

This review focuses on Sorkin’s new To Kill a Mockingbird at the Sam S. Shubert Theatre which serves us beautifully in its revelation of the story of Tom Robinson and Boo Radley, the quintessential mockingbirds of the play. Sorkin’s script is bar none in its delineation of the wisdom of seeing through a child’s lens, in its superb rendering of representative characters (Link Dees,  Judge Taylor, the Ewells and others) and above all in how it configures and integrates many of the important events in the novel in a crystal clear weave that is magnificent, earth-shattering and poignant drama.

Sorkin’s wrangling with the plot of To Kill a Mockingbird to integrate it into a riveting and spellbinding play becomes exceptional in the adroit and genius apparatus of Bartlett Sher’s renowned expertise and direction. The staging which resettles from courtroom, to the porch and interiors of the Finch House, and to the outside of the county jail works seamlessly in transitions: the fly-away sets all smoothly functioning at maximum speed and pace without distractions. His dialogue brilliantly enacted by the cast (special kudos go to the children played by Celia Keenan-Bolger, Will Pullen, Gideon Glick) maintains the novel’s humor, the balanced irony, the essential linchpin themes, the dynamic action, the flavor of the Maycomb, Alabama townspeople. No part of the production should be underestimated from acting to lighting, for all cohere around the script and Sher’s interpretation of it: in short absolutely spectacular.

Having taught the novel for years, I am familiar with much of it the beloved story’s high and low points. The production manifests the crucial thematic threads and dramatizes Lee’s ironic, subtle description by having the children speak to the audience as confidantes. Though the play comes in at around two and one-half hours with one intermission, the pacing is measured and at no part did the action drag or wither with dry spots. The dramatic unities of spectacle fuse with high-powered vigor and flow from the characters’ organic feelings. Credit this to Sorkin’s ability to carve away the meat from a scene and spice it with sometimes hysterical moments and emotional tenor (fear, joy, suspense, foreboding) to create a delectable feast that inspires and engages. Also credit this movement with the gobsmacking performances by Celia Keenan-Bolger as Scout, Will Pullen as Jem and Gideon Glick as Dill. 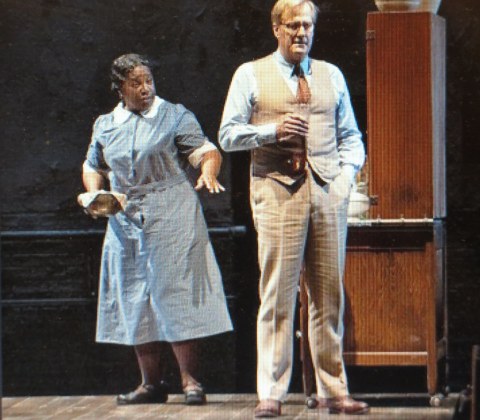 Celia Keenan-Bolger credibly inhabits the spirit of Scout in her ebullience, her enthusiasm, her curiosity, her innocence. I loved the novel Scout, though not the film Scout. I do love Keenan-Bolger’s Scout with the subtle passion and care and am amazed at how Keenan-Bolger allows Scout’s quiet, moment-to-moment, emotional entrenchment to overtake her. In every scene she is present consciousness. She so convincingly wears Scout’s mantle that I couldn’t even guess her chronological age. We have all seen teenagers or adults portray caricatures of kids which are funny or laughable but not always credible. She is no caricature of Scout. She IS Scout. It is through Keenan-Bolger’s sheer energy, liveliness and truthful genius that the production has found its success which balances on her elucidation of innocence and child-like grace.

Likewise, Will Pullen’s Jem as her foil, older sibling and loving brother is equally spectacular. All the modulations and evolutions of Jem, Pullen has embraced authentically, especially in his growing enlightenment about Boo Radley, and in his excoriation and disbelief in Atticus’ naivete about the swirling dark undercurrents of Maycomb’s residents. His relationship with Dill (the very lovable Gideon Glick) is forged with humor and energy and as the “oldest”  and protector of Scout he is the real deal. 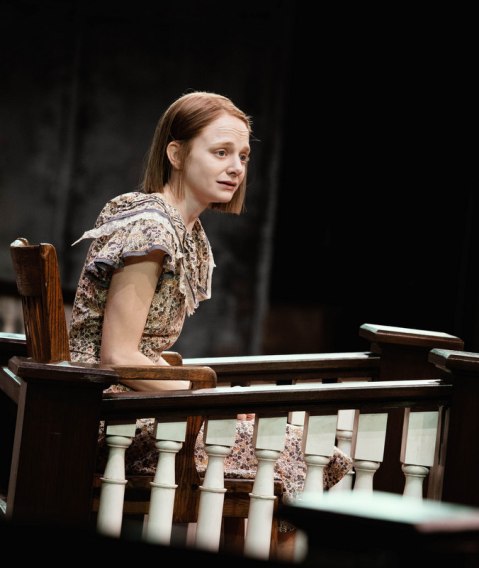 Glick who has some of the best lines and gets the biggest laughs in the production is the sensitive, funny and tragic child that Lee has captured in her novel. Glick, Pullen and Keenan-Bolger are shining examples of characters living onstage; you want to adopt them and take them home convinced their advice and love may serve you in rough times. They and others in the ensemble are why we go to live theater, to empathize, to be thrilled, to cry.

As the modernized house manager/mother/sister Calpurnia (the wonderful LaTanya Richardson Jackson) and the brave and dutiful, loving father Atticus Finch (Jeff Daniels in a fine turn) we understand a relationship we have not seen in the novel, but one which cannot be any other way in our current socio-political milieu. Daniels’ Atticus at times appears to be able to put himself in the place of other individuals, but has an incredibly difficult time of settling in his own shoes. An interesting rendering and amazing uncomfortable irony. Daniels is strongest in the final courtroom scene and with his visits with Judge Taylor, and scolding and being scolded by Jem. Richardson Jackson’s Calpurnia is a favorite; we do enjoy hearing her call down Atticus, though in the time and place the Cal of the novel would not have done so.

A word about some terrific performances. Dakin Matthews is just great. It is a comfort to see a Southern Judge who appears to be decent, kind and human, though it is Southern justice’s purview that Robinson will get the electric chair if found guilty. Robinson is being sacrificed on the altar of justice and if he doesn’t bring in the goods, Atticus will emotionally “die” with him, like a number of characters in the novel caught between Scylla and Charybdis, though Atticus forestalls this thought clinging on to the notion of an appeal. 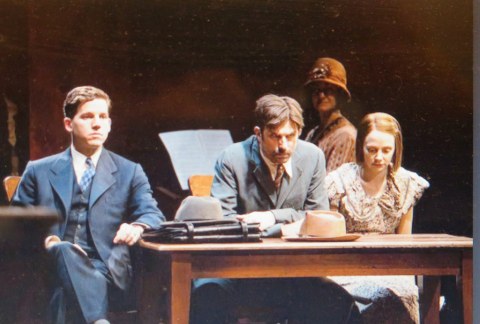 Neal Huff’s Link Deas, likewise, is poignant and revelatory. Both Matthews’ Judge Taylor and Huff’s Deas reveal so much about Maycomb residents and the Southern culture’s subtle, slippery folks who cleverly negotiate the noxious climate of hate. Erin Wilhelmi is beyond superb as Mayella Ewell in her self-righteousness, her fear fueled arrogance and pride. Frederick Weller’s Bob Ewell as the underappreciated villain of Maycomb is sinister and arrogant and bullying. Both manage to reveal the characters as sonorously evil individuals with such humanity, we understand or at least think we understand why they are apparently hateful. However, as Cal suggests, it is horrifying to simulate “walking around in their shoes.”

And then there’s Tom Robinson. All I have to say about Gbenga Akinnagbe’s performance is bravo with tears in my eyes. At the curtain call I was happy to see he has full movement of both arms. As for Boo Radley portrayed by Danny Wolohan who also portrays Mr. Cunningham, he is the appropriate quiet, peaceful, and sensitive mockingbird as Boo, and the misled, “down-and-out” farmer Mr. Cunningham we feel sad for. Through the actors fine portrayals we understand how cultural mores and economics impact the society for ill and keep everyone behind, especially soulfully.

Not enough can be said about Sher’s direction and craft in assembling the skillful and award-wining creative designers to manifest his and Sorkin’s vision for the new play To Kill a Mockingbird. These are Miriam Buether (Scenic Design) Ann Roth (Costume Design) Jennifer Tipton (Lighting Design) Scott Lehrer (Sound Design) Adam Guettel (Original Score) Luc Vershueren for Campbell Young Associates (Hair/Wig Design) Kimberly Grigsby (Music Director) and Kate Wilson (Dialect Coach). All are perfect in my book. I thought the costumes of the children were well thought out; the music is both thrilling and poignant.

Can you get tickets to this award garnering (in a few months) production? Of course and you should. It is a monumental and historical event which happens every night and it comes at a heart-breaking time in US History. Be watchful, be aware, the themes are prescient and prevalent in our everyday lives. The production runs over two hours which fly by and it has one intermission. You can get tickets by CLICKING HERE.