← SXSW 2019 World Premiere Narrative Spotlight Film, ‘The Day Shall Come’
‘Juno and the Paycock’ by Sean O’Casey at the Irish Repertory Theatre, the O’Casey Season Continues →

‘After’ by Michael McKeever, Directed by Joe Brancato at 59E59 Theaters 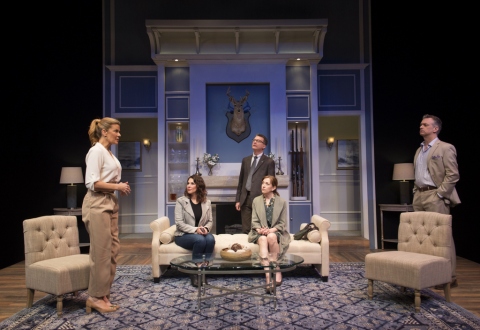 The play After by Michael McKeever superbly, incisively directed by Joe Brancato at 59E59 Theaters chronicles what happens between two families whose teenage sons, once friends, are involved in a bullying incident. In examining the events before, during and after the incident, the playwright dissects the anatomy of denial, psychological debility and delusion in the lives of each of the parents and their sons. Whether the occurrence may have been avoided is uncertain. However, the play argues that openness and communication should be the linchpins of a family unit. When they are not, the possibilities for self-destruction are endless.

The Campbells and the Beckmans, once friends, meet to discuss a bullying text that Kyle Campbell sent to Matthew Beckman. Julia Campbell’s sister Val (Jolie Curtsinger) is present during the discussion to help strengthen Julia and serve as a mediator, though both Connie and Alan Beckman question the soundness of this.

Julia Campbell (Mia Matthews) is a beautiful woman and everything about her speaks of her desire for perfection, peace and happiness. And if there is a wrinkle in her fine world, she will either straighten it out or justify with logic why the wrinkle doesn’t exist. 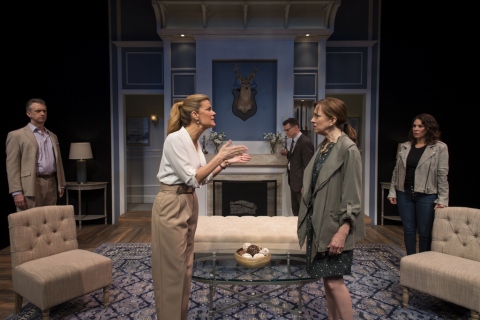 On the other hand Connie Beckman (Denise Cormier) appears to have donned the role of motherhood with a vengeance. Front and center she is a mama bear defending her baby cub and will do whatever she deems necessary to make sure he is safe, regardless of her cub’s wishes. In the opening dialogue between the Beckmans, the playwright establishes that Connie is assertive and confrontational with everyone. Her husband Alan (Bill Phillips) suggests that she must tone down her combativeness if they are to make inroads toward the resolution they desire during this meet up with the Campbells about Kyle’s text to Matthew.

The text “You’re next faggot,” is opaque. Apparently, neither teenager is discussing with their parents what “next” means, who provoked whom, why Matthew is a “faggot,” in Kyle’s eyes, even what Kyle means by “faggot.” Somehow, the vital import of the text is lost in all of the wrangling about Kyle’s punishment and whether this is just a matter of “boys will be boys” shenanigans.

Connie Beckman has not informed Matthew of the visit, not wanting to antagonize her son whom she infers would be furious if he knew. Overshadowing the discussion is the Beckman’s intention to convince the Campbells that the two sons should not be allowed to confront each other again, because the text, from their perspective, is a dangerous threat.

To deflect what happened, Kyle has offered to apologize, though we learn later this does not “come from the heart.” Additionally, Kyle has received a suspension from the principal and it is hoped that the parties involved have made up and all is well. On his part Matthew apparently feels to deal with the event on his own. Like Kyle, Matthew is deflecting and hiding what occurred from his parents, keeping it as a secret between himself and Kyle. 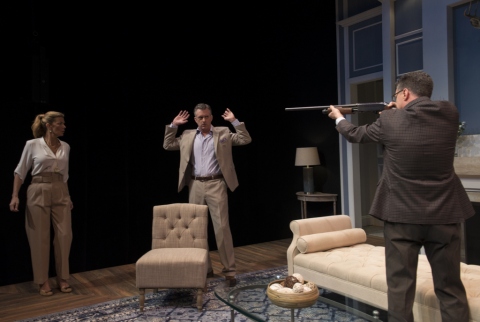 The Campbells and Beckmans do not have open communication with their sons so that the teenagers feel they can discuss ANYTHING with them or even ask for the help that they need. In fact the only reason why the parents became involved is because Connie broke the privacy rules with her son and checked his phone text messages, then went to the principal. Her actions from a teenagers’ perspective identify her as an over-protective mother who is exacerbating the problem when it should be left between Kyle and Matthew to resolve. Certainly, the Campbells both feel that if Connie had not forced the issue, nothing further would have happened and their sons would be “OK.”

We learn later, the situation is more complicated than both families imagine. The teenagers are duping the parents and principal. Lip service has been given, but the truth has been obfuscated and no one wants to look for it, not even the teenage boys who are unable to deal with their own personal feelings on a rational level to make themselves understood to themselves, let alone others.

Initially, McKeever doesn’t focus on the lack of communication between parents and sons. It only manifests as a reveal by the conclusion of the play. The irony is that the parents don’t see this elephant in the room either. Both couples are on the defensive and willing to blame “the other side,” as opposed to coming to terms with the fact that they do not communicate with their children on the deepest level possible to understand what the text means. Allowed to continue, both sons’ isolation and reluctance to speak to their parents may result in an escalation of events between Kyle and Matthew. 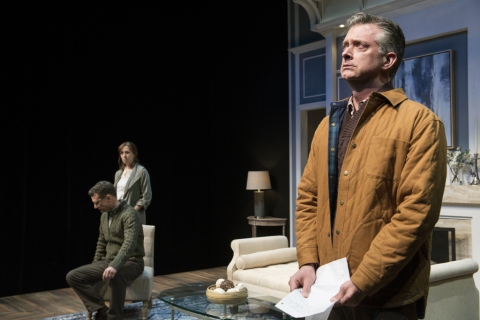 That their blindness about their children belies a flaw within the parents’ psyches gradually becomes apparent. Indeed, the incident between Kyle and Matthew explodes the arrogance each mother has about her ability to parent her child. It also explodes the stereotypic masculine tropes the fathers may embrace since their sons did not feel comfortable enough to discuss the underlying situation with them either. The walls that divide the sons from their parents, and the spouses from each other only expand as the couples attempt to come to a satisfying conclusion, an impossibility as long as the blindness and alienation remains.

The Beckmans argue that the text is a threat, that it is serious and should be dealt with not only by a suspension but by Kyle’s expulsion from the private school which abstains from taking such extreme action for monetary reasons.  To illustrate the point that the texting threat is severe and perception means everything, Alan frightens all in the room with a rifle he takes from the living room wall mounting. Though he proves his point about the nature of a perceived threats’ power, it falls on the Campbell’s deaf ears. Tate Campbell believes that the text is just BS. He minimizes his son’s behavior as does Julia Campbell and both agree if Connie had not taken the text to the principal, Kyle and Matthew would have forgotten about the situation.

As the arc of the play’s development expands and intensifies, revelations about the couples become manifest. In the “During” segment of the play, the circumstances between Julia and Connie appear to improve after Julia shares her difficulties becoming pregnant with Kyle. Both women apologize to each other. Nevertheless, Kyle’s resentment at being suspended and Matthew’s fear about facing Kyle in school have not been dealt with adequately. Neither son expresses his emotions to his parents. The situation explodes with disastrous consequences and at the end of the segment of “During,” a catastrophe occurs which is elucidated in the last segment of the play with irony.

This is a riveting, powerful and timely production. The greatness of the play in its themes, conflicts and revelation of the importance of communication among family members is evident from the outset. The adroit actors carry the tension throughout. Indeed, each actor hits the ball out of the park so that no one character “dominates” the other which would ruin the dynamic and theme that all have a responsibility in the events. This is ensemble work at its best, its most alive.

Brancato’s direction paces the suspense toward the tragic and uplifting conclusion.  And the production values sustain this presentation making for vibrant, “in-the- moment” theater that resonates for us, as thrilling theater should.

With McKeever’s examination of such a situation, we hope to learn from the mistakes of these two families. As the playwright implies, channels of communication must be open. Judgmental, value-laden condemnation should not be the focal point of a parent-child relationship. Ironically, over-protection can damage as can permissiveness and laissez faire parenting styles. However, with teenagers, it is impossible to second guess them. They may damn well do as they please. What then? The parents must deal with what comes “after.”

After is being presented by Penguin Rep Theatre and Inproximity Theatre Company in their New York City Premiere. The production runs 90 minutes with no intermission at 59E59 Theaters (59E59th Street between Madison and Lexington Ave.) until 14 April. To purchase tickets you may go to the website by CLICKING HERE.

Posted on March 19, 2019, in NYC Theater Reviews, Off Broadway and tagged 59E59 Theaters, After, Michael MKeever. Bookmark the permalink. Leave a comment.

← SXSW 2019 World Premiere Narrative Spotlight Film, ‘The Day Shall Come’
‘Juno and the Paycock’ by Sean O’Casey at the Irish Repertory Theatre, the O’Casey Season Continues →