‘The Cake’ Directed by Lynne Meadow, at Manhattan Theatre Club 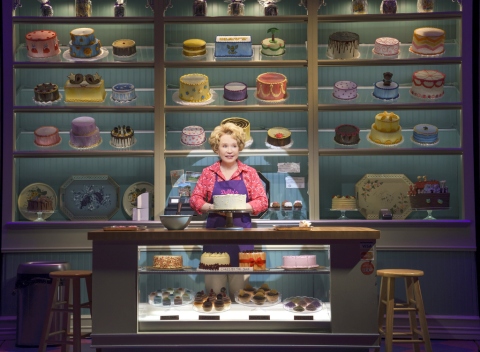 The Cake written by Bekah Brunstetter is a deliciously humorous look at love and prejudice with twists that harken back to the Supreme Court ruling which sided in favor of Masterpiece Cakeshop which refused to to bake a cake for a gay couple. The setting is not Colorado, however, it is North Carolina, and there is a similar response about baking for a gay couple.

Indeed, one of the themes of The Cake touches upon the current backlash by religious groups against the LGBTQ community and gay marriage. However, by the conclusion the playwright reinforces that love and decency can drive out divisiveness and bigotry, leading to mutual respect among groups with divergent orientations and beliefs.

Della (Debra Jo Rupp) owns her own bakeshop and is a fabulous baker of confections, specialty cakes, cupcakes, cookies and other desserts, all of which she bakes from scratch in her shop in Winston-Salem, North Carolina. As she introduces herself with her sunny, sociable and sweet personality, we recognize why she selected this particular business to showcase herself.

Dessert baking is fun. Cakes and confections are feel good, comfort foods in a state that is less concerned about waist-lines and more concerned about family gatherings and get togethers. A cake will satisfy as the crowning glory of any party and Della’s recipes are unique and fabulous.

Furthermore, Della is not timorous about sharing her recipes because most people who ask for them don’t follow them to the exact drop of liquid or sift of dry ingredients. Della affirms that’s why her cakes are so delectable. When she bakes the cakes that she has crafted for greatness, she follows the recipe directions and comes out with beauty every time. She further endears us in this opening sequence when she tells a customer that she is going to be a contestant and compete with others on The Great American Baking Show, the most watched baking show on CBS.

Debra Jo Rupp is a joy to watch, as she takes every line in this opening sequence and makes it her own with spontaneity, authenticity and sincerity, so that we long to taste a piece of her wonderful cake and feel the love vibrating from her. If mom baked and cooked with love, surely Della does the same. She is so affable and winning, we are completely taken in by her hospitality. We forget that she lives in the south, has lived there her whole life and most probably and at the least harbors residual racism and bigotry or at best is in a state of confusion like a good part of the southern United States regarding the LGBTQ community which cannot be reconciled with their religious beliefs. 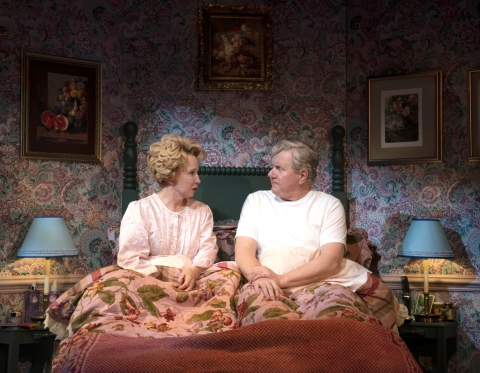 However, the worm turns soon enough when Northerner Macy, a lovely black journalist enters the shop. During the course of the conversation, Macy turns down a taste of Della’s cake and goes into a rant about the food industry putting sugar in everything to addict consumers who are getting so fat that childhood obesity and diabetes are at the highest rates ever in the history of the nation. Immediately, we understand that beneath the lovely bakery confections there is an underlying toxicity and harm to one’s health. Macy has shaken us awake and alerted us that perhaps Della is a bit too sugary for our Northern sensibilities.

When the conversation continues and Della claims she is not concerned about politics but just concerned with her cakes, Macy comments: “Isn’t ambivalence as evil as violence?” Bam! We get the alarming picture. As a typical Southern woman who votes as her husband tells her and doesn’t think about the hypocritical values of Christianity rejecting a woman’s right to choose while obviating all responsibility toward children beyond the fetus stage, Della’s love charms appear to ring hollow. We wonder, where does she stand with her love if not in support of children and her baking?

Macy’s loaded, thematic-laden remark ratchets their communication into an embarrassing stalemate: Della leaves to check on her pineapple upside down cake and Macy oogles the piece of cake Della cut for her to try, but doesn’t touch it. Clearly, Della and Macy are at opposite ends of the political and religious spectrum and never the twain shall meet. Then Jen enters with a wedding binder to visit her mother’s old friend Della and the play launches off into a number of fascinating, complicated directions that stretch Della’s patience and religion, and hurt Jen’s feelings almost to a breaking point. 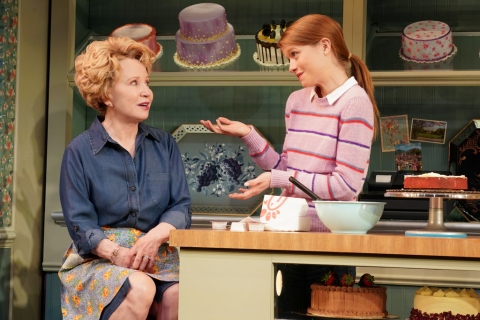 However, clarity, understanding and growth come when Jen discusses why she is who she is and how she has come to make the decision to marry Macy and live with her, despite Macy’s father’s censure and opprobrium. When Jen and Macy ask Della to bake their wedding cake for them and attend their party, Della’s husband, in typical “good ole boy” fashion, puts his foot down as the man of the house.

Though Della attempts to get around him, he remains steadfast. Taking her cues from her deep conversation with Jen about being a woman, Della attempts to ignite the fires that once burned in Tim’s heart. Indeed, it is obvious that Jen’s and Macy’s conversations with Della have touched a growth nerve and this in uncovers the flaws in her marriage with Tim.

Della is forced to sift herself and reconfigure a new recipe of care and concern with her husband and her daughter’s friend Jen. It is in her desire to be a good, decent person that we discover where Della’s love and heart is as she works things out with her husband and reconsiders her religious beliefs. Her love which is rooted deep grows toward becoming more open-minded.

The Cake is a compact, well-written, beautifully acted, sensitive play that resonates with vitality for our time. Marinda Anderson as Macy portrays the lucid, flexible and mature womanly partner of the equally sensitive and hopeful, upbeat Jen. As Jen Genevieve Angelson, measures beat for beat Anderson’s well-thought-out depiction.

Dan Daily as Tim, Della’s husband, is both jarring in his domineering attitude, then later loving and humorous in his sensitivity toward his wife. The section where he reveals the issue that has been undermining his confidence in their relationship is excellent. Debra Jo Rupp’s Della is particularly poignant when she tries to engage with Tim and he is incapable of responding and tells her so. This is a wonderful lay up to the surprisingly humorous event which occurs between them later in the play.

Lynne Meadow’s sterling direction keeps the pacing and the humor alternating in time with the quiet, thoughtful powerful moments. These moments underscore the themes about how to bridge the gaps in our viewpoints when friendships are at stake. The artistic elements and revolving set design serve the importantly intimate scenes between Tim and Della and Jen and Macy. Allowing us to view their relationships, we note there isn’t much difference regarding the couples as they attempt to further their understanding and love of each other. I was particularly heartened by the portrayal of Tim and his love for Della. Whether in straight or gay hearts, love abides with need. And this results in the uplifting and satisfying conclusion of The Cake.

Special kudos to John Lee Beatty for his superb scenic design (too bad there were no real cakes there, but at the bar the night I saw the production, there was a vanilla cake). And kudos to Tom Broecker for Costume Design (the wedding outfits are perfect), Philip S. Rosenberg for Lighting Design, John Gromada for Original Music and Sound Design and Tommy Kurzman for Hair, Wig & Makeup Design.

This is a winning production that you will enjoy. It runs with no intermission for 90 minutes at the Manhattan Theatre Club’s New York City Center Stage 1 (131 West 55th Street between 6th and 7th). For tickets CLICK HERE.