In an intriguing World Premiere screening at the Tribeca TV Festival, the pilot of the TV series Evil, directed by Robert King and created by the writing team of Robert and Michelle King (The Good Wife, The Good Fight) focuses on the terrifying manifestations of evil in a hybrid genre show which is part mystery-crime drama with sardonic humor and supernatural, mystical elements. The Kings delve into what constitutes the nature of evil. Each Thursday beginning on September 26 and extending into 2020, Evil examines issues and case studies where evil or its opposite goodness presents itself in human or spiritual form while linchpin investigators, a skeptical psychologist, a priest and a pragmatical empiricist go head to head with explanations during their intense, thrilling adventures to solve cases.

Dr. Kristen Bouchard (portrayed with vitality and nuance by Katja Herbers-Westworld) is the skeptic whose dreams become haunted by a demonic presence that she initially determines to be a convincing night terror, but which the series suggests may be more than just a bad dream. She is intrigued by David Acosta (the attractive Mike Coulter from Marvel’s Luke Cage) the neophyte studying to be a priest who becomes her side-kick offering a preternatural view and suggesting that there are other realms operating that Dr. Bouchard may not be aware of. Women at the screening were practically drooling over Coulter. His sophistication and solid, calm, spiritual demeanor are a tremendous lure to Dr. Kristen Bouchard (married to a thrill-seeking, absent, adventurer husband). There is a budding sensual tension between Bouchard and Acosta that is all the more enhanced by the Catholic Church’s command for Acosta’s sexual abstinence.

These two are joined by a third investigator, the scientist/atheist Ben Shroff (comedian Aasif Mandvi- The Brink on HBO) who rides both of them and is the counterpoint when either goes too far afield in his or her area of expertise. To round out the weekly cast are Kristen’s children played by Brooklyn Shuck, Skylar Gray, Maddy Crocco and Dalya Knapp, and hot, rockin’ grandmother Sheryl Luria (Christine Lahti-the accomplished actress who has conquered stage, film and TV). Lahti recently was lauded for her portrayal of Gloria Steinem in Gloria: A Life by Emily Mann directed by Diane Paulus which ran from October 2018 to March 31, 2019 at the Daryl Roth Theatre in New York City.

Along the journey in their show, the Kings raise many pertinent questions and bring in topical themes, for example highlighting that there are secret communities of perpetrators of horror and terror on Social Media who are unified together in their own philosophical and behavioral nexis of a variety of isms and hatreds: i.e. racism, anti-semitism, Nazism, misogyny, xenophobia and more. The writers posit intriguing questions.

Are these groups influencing each other in what are evil acts? Are they guided by spiritual entities? What behaviors were nurtured in their family lives? The show raises incredible issues and places the very serious social/cultural mores of the nation at the forefront. And in the background there is the everpresent current administration which may inspire, provoke and enable such evil actors who, in the traditional, scriptural, Biblical purposes of the Wicked One known as Satan, come “to kill, steal and destroy.” But then what of the alleged Christian evangelicals who align themselves with political leaders who provoke such evil actors to commit crimes like those committed in Charlottesville, Virginia, The Tree of Life Synagogue and Parkland, Florida? 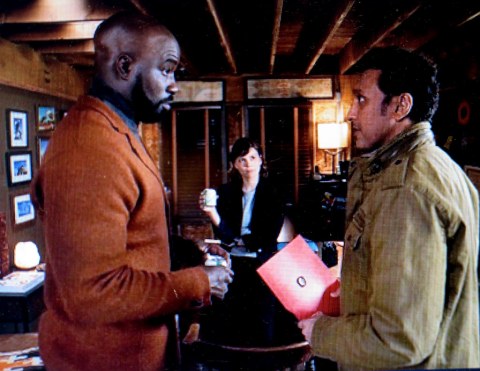 In the show Evil, be prepared to see twists and turns and the upside down viewed right-side up. Evil is all about angels of light (Lucifer is an angel of light). And it is about discerning truth from lies and not allowing oneself to be susceptible to human “powers of suggestion” that have a hidden rational explanation in a time of fakes, frauds and charlatans who sport their own hidden agendas. But on the other hand, when miracles do happen, and real angels do appear and save lives, should we not be able to recognize these as a singular truth as well?

In the pilot premiere we get a taste of a few of these issues as Dr. Bouchard is called in as an expert witness to provide testimony after interviewing a serial killer who slaughtered a family. Initially, she determines that the killer was not insane though he blacked out and doesn’t remember the murders. As the show progresses, frighteningly, his behaviors shift and when Bouchard produces a crucifix upon the suggestion of Acosta, the killer transforms.

Is this insanity? Is this demon possession? Is demon possession a form of insanity? Or is there some amoral impulse at work in his bloodthirsty behavior and psyche which promotes harm and death to others? Is it an inherent condition which each human being harbors and must expiate in his or her life by evolving into a kinder, gentler, generous, loving human being? Or is it evil spirit based in the supernatural realms of other consciousness where demons, incubui and sucubui hover commanded by powerful wicked spirits of Baal, Legion, Moloch, Mephistopheles, et. al who infiltrate our dreams and unconscious if we are susceptible to them as Dr. Bouchard and David Acosta may be?

Dr. Boggs (Kurt Fuller) Bouchard’s therapist and Leland Townsend (Michael Emerson) an expert witness for the defense provide grist to engineer the eventual solving of this dire case. However, some questions, some mysteries have no explanations. And these questions float throughout the series which promises to be both profound and timely in an era of psychological influence, bullying malevolence and abuse as individual cowards behind a social media avatar upload untoward and violent pictures reinforcing a communal experience of death and abuse via 4Chan, 8Chan, Reddit or private, secret sites. As these isolates band together as terrorizing predators to strengthen their psychosis with other cowardly invisibles, they justify and normalize their behaviors. Thus, they create their own morality of correctness and righteousness as their base seeks to grow. Is this the work of evil entities or the evil DNA of human beings who are past all hope of change or rectitude?

You can catch Evil on CBS Thursdays at 10 pm beginning the 26th of September.  Check online for additional viewing opportunities.