‘Wives’ by Jaclyn Backhaus, Spouses Emerging From the Male Institutions of Future Past

Wives written by Jaclyn Backhaus directed by Margot Bordelon is a playful, farcical, quasi-philosophical comedy about women freeing themselves from the definitions and oppressions men have “gently” bestowed on them. Considering that most women outlive their spouses today, if women live long after their husbands have died, shouldn’t they be able to redefine their lives into a new evolution? Wives in attempting to grapple with this question features four segments with different settings to reveal how the women, some celebrated, some unknown, confronted their freedom after the dominant male in their lives lost power or expired.

Backhaus’ plays is a series of self-contained vignettes that require the audience to understand a bit about each setting as it twits the character wives and their husbands or in the case of India (third vignette) colonial institutions. The first wife is the amazing, vilified, powerful and ingenious Catherine de’ Medici (Purva Bedi portrays the wealthy Italian noblewoman) whom her relative Pope Clement VII, labeled her marriage to French Duke of Orléans as the “greatest match in the world,” taking credit for the arrangement.  When her husband became King Henri (Sathya Sridharan) she was vaulted her into the position of Queen of France. But she rarely saw Henri who favored his mistress Diane de Poiters (Aadya Bedi). Only after ten years when her life as Queen depended on producing an heir, did Cathy begin to have sex with Henri to produce ten children, seven of whom lived to adulthood with her.

Backhaus emphasizes Catherine’s spurning by Henri for Diane with hyperbolic humor. In real life, de Poiters had a lot of influence in the court, most probably because she was twenty years older and more experienced in court politics and intrigue than both Henry and Catherine who were the same age. In the farcical nature of this segment King Henri, Queen Cathy and Diane are hyper-modernized, two-dimensional caricatures to prove the point that women, subject to their husband’s whims, must swallow their subdued portion and be oppressed by them as Cathy was by Henri and Diane. The scene between Cathy and Diane where they scream ghetto-speak epithets to each other is funny and references pointed conflict that women will empathize with. Also, Adina Verson’s cooking lesson in a flippant direct address with a tray of chickens and squishy onion or two provides great humor at the outset of the scene.

Because Backhaus doesn’t indicate why, we are left with the impression that Diane de Poitiers (Aadya Bedi) is perceived to be superior to Catherine (Purva Bedi) for the reason that she is either younger or more flirtatious. The reason is more complicated. Nevertheless, as we note the death of Henri after a jousting match injury and Cathy’s rejection of Diane’s presence from court and removal from Henri’s will, we are heartened by a wonderful twist. The two women end up as friends. Cathy’s reasoning is sound; the court expects them to be enemies, however, as Cathy assumes the power that Henri excluded her from, Diane will become very useful as she was for Henri.

Thus, Backhaus emphasizes that only after the dismissive male husband dies are the women able to assist each other. The theme of how men pit women against each other to dominate and oppress is clear as is the women’s glorious freedom to shine after their oppressors leave the planet for what was a man’s world becomes a woman’s world open to redefinition. 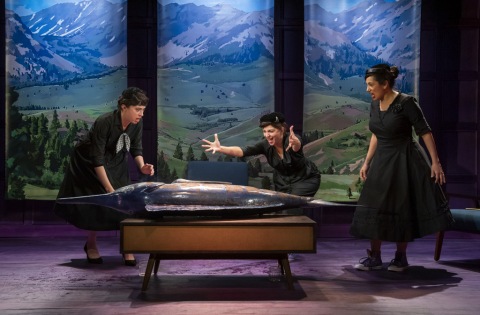 Each of the vignettes carries this theme of wives being freed coming out from the shadows of their marriage partners. In the second segment another male death occurs: Hemingway’s. Backhaus places us at his funeral with his two former wives and current wife attending as Big Ern (Sathya Sridharan) gives his own eulogy which he wrote and ends with, “I have nothing to say to my  wives: Mary Hemingway, Martha Gellhorn and Hadley Richardson. And Pauline.” However, with the exception of Pauline, the mistress who died, the three played by Purva Bedi, Adina Verson and Aadya Bedi have much to say about Hemingway. And what begins with a discussion of themselves after their divorces ends with a humorous “hate fest” about Hemingway as they drink toasts to his death and share the truth with each other about their relationships with him.

To one extent or another each admits that they allowed him to co-opt their lives as he knocked them out from under themselves in his writings, while they helped him with his manuscripts, served him and took a back seat to his glory. With the admission “we can never write ourselves because he wrote our history for us,” each proclaims what they think Hemingway’s legacy is for them, infusing a description of themselves in the terse Hemingway style. 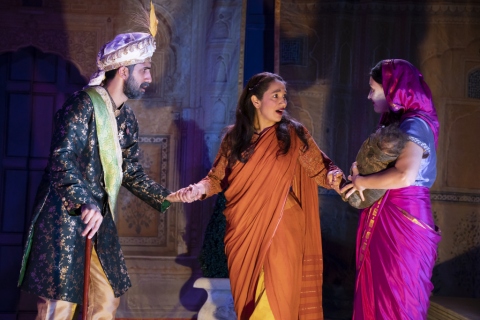 Of course the irony is that they are still under his shadow not being able to write or live their own legacy apart from him and his “glory.” Coming late to this realization, but encouraged by the others into understanding, Mary (his last wife) joins in with Hadley and Martha into agreeing that his writing was “shitty.” And in the apex of the vignette, the three women like the witches out of Macbeth together ignite an act of symbolic freedom releasing themselves from their identity of “nothingness” to move themselves out from under Hemingway’s oppressive machismo.

The third vignette takes place in 1921 India and begins from the perspective of a colonial (Mr. Patterson) appointed to guarantee the relationship of England with the Maharaja Madho Singh II by halting the influence of the witch Roop Rai who gives healing sessions to the Maharaja. When Patterson threatens violence to stop the healing sessions which he thinks are dangerous to the Maharaja’s life, Roop Rai places him under a powerful spell that humiliates and vanishes him. In the process the Roop Rai, the Maharaja and the Maharini pledge their unity to each other in resisting colonialism and affirm the future freedom of India that will redefine itself out from under its oppressive marriage to England. But the majesty of the moment is forgotten with the names of the individuals, especially Roop Rai whose genius contributed toward the freedom gained.

Backhaus continues the theme of women’s witchery and power and carries it into the present time in the last vignette under supervision of a picture of Virginia Woolf, the classic, misunderstood feminist of her time. In the basement of a fictional university a witch (a member of a commune of witches on campus who have found a safe space to practice their craft) creates a spell. During the spell an acolyte is encouraged to remove the shackles of her forebears whose mores kept women in demeaned servitude as she untethers herself from “the visions made by men.”

Beginning with an incantation that the acolyte repeats as the witch stirs up the ritual toward freedom, “Everything about you is right,” becomes the rallying cry that gives her confidence to examine her ancestry and claim an evolved identity where she can be anything and everything. In this final segment the acolyte, like the other burgeoning feminists we have seen before her (Catherine, Mary, Martha, Hadley, Roop Rai) finds herself, then defines her own being in a poetic direct address to the audience. Purva Bedi Adina Verson and Aadya Bedi and Sathya Sridharan play the various parts. 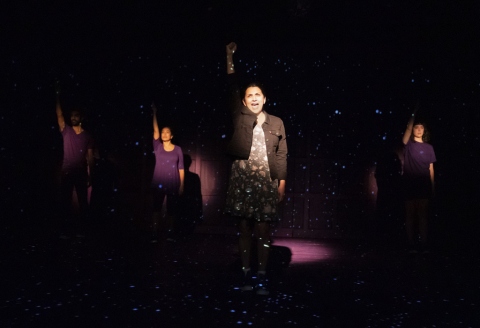 Wives is a heady production revealing how women in various times discovered their power after the male presence whether paternalistic, macho, colonial or socially institutional is disappeared. Backhaus’ ideas cohere in the script but at times become disjointed in the transference to live stage performance. Some of the problem is in the line delivery; sometimes accents get in the way of intelligibility so that meaning and connections are lost.

The conclusion was beautifully rendered, however, and I couldn’t help but consider in the hope expressed was the great tragedy of the women who had gone before whose genius was repressed by institutional power (paternalistic, colonial, chauvinistic) because of fear. It is as if women, not being allowed or not allowing themselves to realize the fullness of their completion was a wasteful sin of the ages. Backhaus’ work is a great encouragement to the present and future generations of women in the hope that the past will not raise its ugly, deformed head to devour the present strides in women’s enlightenment and contributions of their greatness.

Wives runs at Playwrights Horizons (West 42nd St. between 9th and 10th) with no intermission until 6th October. For tickets and times CLICK HERE.