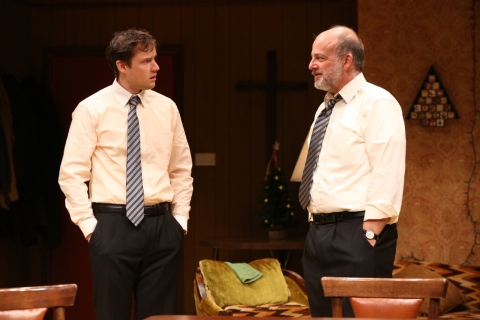 Dublin Carol by Conor McPherson directed with just the right tone and irony by Ciarán O’Reilly is a seminal play about the spirit of Christmas that is bestowed upon the principal character John, superbly portrayed by Jeffrey Bean. McPherson chooses this self-hating alcoholic protagonist to reflect humanity’s hope of redemption from broken promises, regrets and soul sins lathered with guilt and remorse.

McPherson’s John, like many, reveals an overarching longing for change from the boredom of self-loathing, loneliness and recriminations. During the course of the play we see how the playwright elucidates that such change never happens quickly, but does come with subtle, gradual almost unnoticeable shifts when least expected. In John’s instance it is the visit from his daughter Mary (Sarah Street) whom he hasn’t seen in ten years that fans the flames that have been ignited by his boss the mortician Noel who saved him from one stage of himself. When she comes to tell him about the condition of his wife, her mother whom he abandoned long ago, the conversation prompts his movement to admit his miserable state when he left the family. He was in hell. 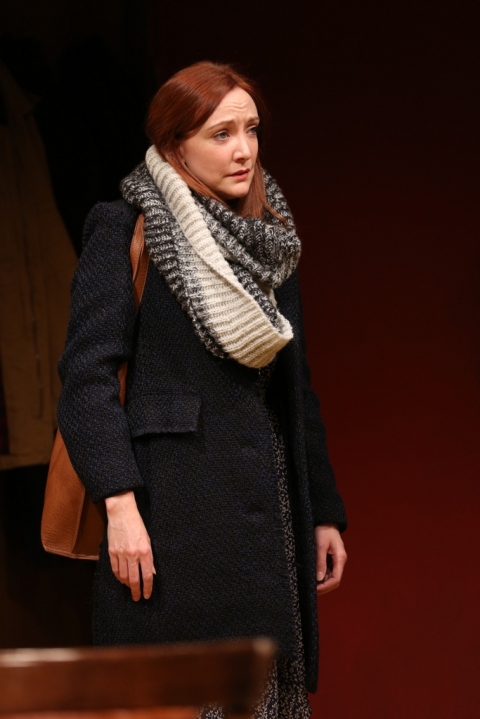 Above all McPherson’s work is about love and forgiveness. Such love is given by John’s daughter. And it is an irony that John is so over-bloated with guilt and remorse that he cannot forgive himself and thinks himself completely unworthy of it. But it is her expression of love and respect (she admits she also hates him) that helps him make a final determination. The decision moves him toward a kind and thoughtful resolution with his family which by the end of the play portends a new door will open in John’s life that may lift him up from his self-hatred into self-forgiveness.

Though the setting is Dublin Christmastime, in the office of a funeral parlor where life and death sit side by side, the title references a widow Carol who lived in Dublin that John mentions he had a long-time affair with. The title also alludes to a Carol as a song heralding the good news of the celebration of Christ’s birth. Of course, Christ’s birth symbolizes that redemption, reformation, forgiveness and love are possible for the great and small and even someone as “rotten” as John perceives himself to be. 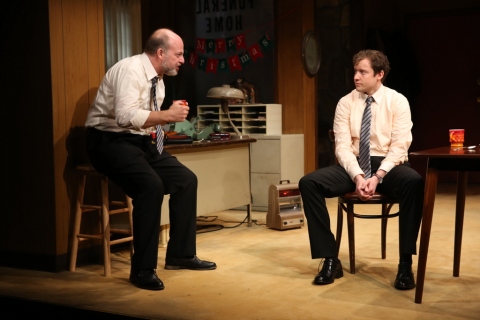 The characterizations are drawn clearly and we become engaged in the simple interactions between Mark (Cillian Hegarty) and John in the first segment, John and his daughter Mary in the second and John and Mark in the third. The arc of development grows out of these interactions and the nature of the conversations which become more revelatory and intimate bring about a change in John’s character.

As Mark and John sit down for tea and a respite from their labors assisting Mark’s sick Uncle Noel (a mortician) with the external arrangements of a young person’s funeral while Noel is in the hospital, we first learn about John and a bit about the twenty-year-old Mark. John shares his self-perceptions and generally blames his lack of discipline and care for his family because of alcohol. He enjoys drinking. But when Mark’s Uncle Noel gave him a job to help in the office with the funerals, John’s life improved and he lifted himself up from the bad state he was in when Noel met him. 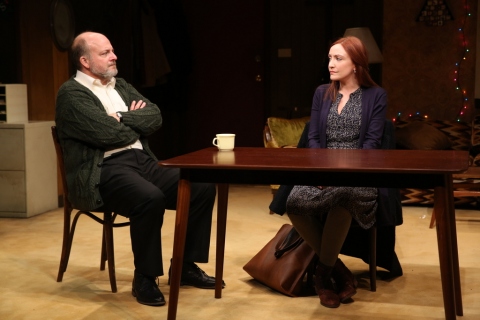 John’s character grows on us because he holds little back and digs down into the depths of his self-loathing in each segment, taking off on a racetrack in his confession and heart-to-heart with daughter Mary to whom he apologizes for his miserable treatment and abandonment of the family. It is clear that there was no physical harm. Indeed, his own father beat his mother and John does not follow in his footsteps. Nevertheless, he lands on the fact that he didn’t stop his father and was a coward and felt self-hatred for selfishly, brutally not intervening because he feared getting beaten along with his mother.

However, even after John apologizes profusely for his behavior to Mary, he knows it isn’t enough. Clearly, he despises himself and wishes he could erase the memory of who he is along with his former identity and behaviors with his family. The self-disgust moves him to say he wishes he had never been born. Of course the more he admits fault, and makes such profound declarations, the more we identify with him and find his authenticity human, real and poignant. Jeffrey Bean is truly adroit in the role. He strikes all the notes clearly. He manifests John’s self-disgust with the nuance that John longs to be a different person, but is afraid he will let himself down by letting his family down once more. 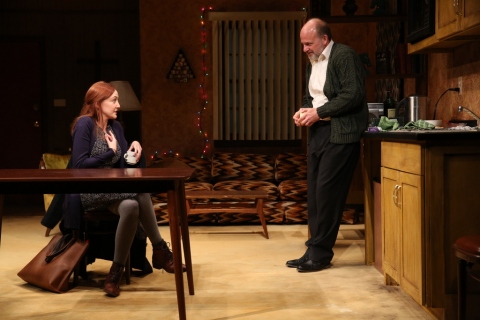 For their part Mary and Mark become John’s sounding boards, yet he clearly engages them and asks about their lives. When he discovers the news that Mary brings and the subsequent request that goes with it, the situation becomes a way that he can make up for his behavior in the past. He and Mary confess each other’s faults to one another, an important step toward forgiveness. But can John trust himself to do the right thing and stick to his decision? The irony is this: if he fulfills the request he will have to confront his past with the one he most abused and hurt, his wife from whom he never obtained a divorce. His guilt is overwhelming!

As his daughter leaves with the understanding that John will go with her to visit her mother who is dying, she importunes him not to drink any more and to be ready at a later time when she will drive him to the hospital. Of course, flashing lights go on. It is as if the request to not drink triggers John with perverse reverse psychology. The segment closes leaving John contemplating what to do. To drink? To make it up to his wife, daughter and son? Or just to escape somewhere out of their reach?

At the top of the third segment we discover John caves to self-loathing and guilt. He has been celebrating “Christmas.” Mark interrupts him only to discover John was too overwhelmed with drink to pick up his money at the bank. During the course of their interchange, John lays down a rant which is pure McPherson replete with irony and sardonic humor as he relates how his affair with Carol and her unconditional love drove him to the end of himself and the dregs of barrels of alcohol. At this point it is apparent, especially when he begins to put away the Christmas decorations that he has no intention of making it up to his family or going with his daughter. He is back to square one and will be on another bender and into the abyss without Noel to save him a second time.

McPherson’s characterizations and themes are spot-on. Throughout, this work is filled with dark humor which resonates in truthfulness. And in the hands of Jeffrey Bean guided by O’Reilly, the ironies spill out with fervor, especially in the last section of the play when John attempts to counsel Mark not to feel guilty about ending it with his girlfriend. John’s groveling diatribe about the stages of his drunks is also humorous. But the confession and John’s setting a terrible example for Mark does both characters good. Hearing the pain and misery of the stages of drunkenness would give anyone pause about drinking to oblivion. 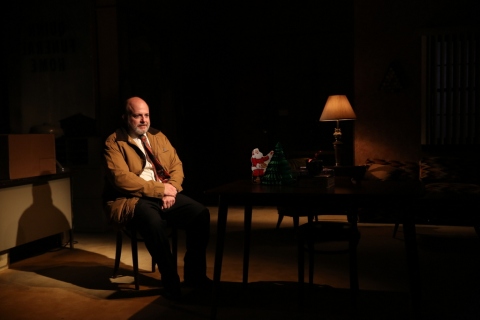 The ensemble work is tight and O’Reilly keeps the production resonating with the wisdom and revelations that McPherson suggests in his themes. Kudos to the creative team who bring it all together: Charlie Corcoran (scenic design) Leon Dobkowski (costume design) Michael Gottlieb (lighting design) M. Florian Staab (sound design) Ryan Rumery (original music).

See Dublin Carol for the uplifting performances in this subtle and different McPherson work. It is running at Irish Repertory Theatre (22nd St between 6th and 7th) with no intermission. For tickets and times go to their website: CLICK HERE.