Once again the New York Botanical Garden presents its train extravaganza to usher in New York City’s Holiday season. This year’s 28th Holiday Train Show® promises many unique features exhibited in an immersive indoor winter wonderland adjacent to the Enid A. Haupt Conservatory, while the palm dome of the conservatory undergoes refurbishment. 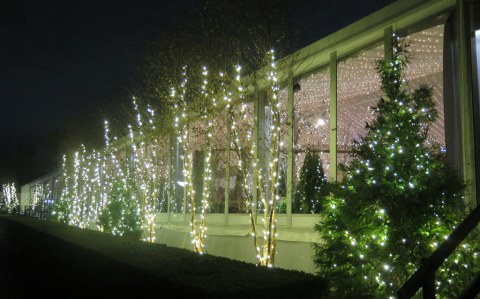 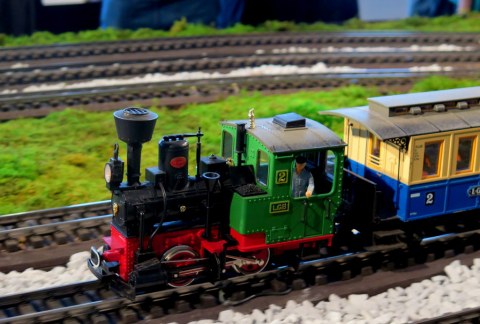 The immersive wonderland housed in two, spacious, climate-controlled structures located on the conservatory lawn is a boon that highlights the amazing craft and ingenuity of Applied Imagination’s artisans. This year visitors may more easily walk around and get a close up view of how the natural plant part materials are made into gorgeous architectural structures that replicate buildings found throughout New York City and upstate New York.

Bar Car Nights which occur on select Fridays and Saturdays for adults 21 and over, prove to be a variation on the years I’ve attended before. The after-dark viewing of the Holiday Train Show® is the centerpiece of festive winter activities. The night I was there couples, friends and partners sauntered slowly down the aisles viewing the miniatures and identifying the plant parts that comprised doorways, windows, bricks, lintels, finials, entablatures, moldings and ornaments on facades of the mansions built during the Gilded Age.

One striking example is the The Senator William A. Clark House which was known as Clark’s Folly. Clark’s Folly cost $7 million to build at the time ($188,225,000 in current inflationary dollars) and was demolished twenty years later to make way for a luxury apartment building on 960 Fifth Avenue, one of New York City’s A-plus buildings filled with elites at “the pinnacle of what many consider world society.”

Applied Imagination’s (the creators of the models in Alexandria, Kentucky) attention to detail on these replicas is museum quality artistry. On a profound level, their work with the NYBG is a celebration of the history of New York that most New Yorkers are unfamiliar with and that codifies for all time the buildings that are representative of aspects of New York culture and society. Replicas include the newest iconic structures, like the Oculus in downtown Manhattan, and some of the oldest buildings in the city that date back to the 1700s (Queens). Poe cottage in the Bronx dates back to the early 1900s.

Each building was constructed with painstaking care from the most insignificant of plant parts, a twig, an acorn, a pistachio nut shell (KyKuit) barley and pepper flakes (Macy’s Building) over the twenty-eight years that visionary and founder Paul Busse conceived that it would be more intriguing and forward thinking to create replicas from bio-degradable, plant materials fitting for a garden or park around which trains would chug, zip and race past. Such miniature organic architecture is reminiscent of what Frank Lloyd Wright believed: that buildings should be in harmony with humanity and their environment. 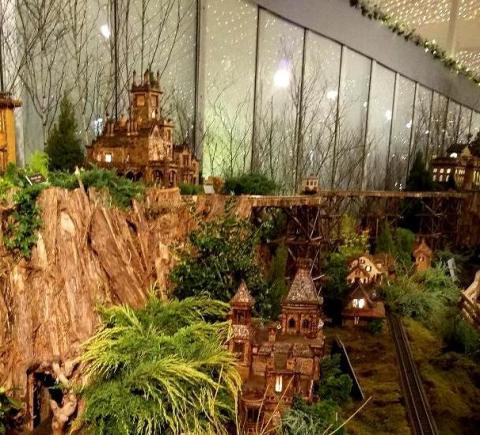 Applied Imagination’s prodigious work on its miniatures manifests Wright’s philosophy on steroids with incredible finesse and joy. The evening I attended, I noted that the couples spent more time at the displays which they could easily approach. I heard exclamations as they recognized iconic landmarks that are featured prominently.

One example was Yankee Stadium whose lights blazed against the outside backdrop of darkness, which peered in from the Garden’s towering conifers section. The Stadium is a favorite with the guys who recognize the Old Yankee Stadium which was torn down. Also, the quips usually follow about Yankee Stadium taking preeminence over The Mets Stadium which has yet to be represented in the show, nor is Ebbets Field which only those from the previous generations who lived in Brooklyn in the 1950s would remember that stadium which has since been torn down.

This year the main feature of the show is Central Park, some of whose structures have been given an uplift. Designed by landscape architects Frederick Law Olmsted and Calvert Vaux, Central Park is a miraculous wonder of the city that has seen a number of battles to keep it the way it was conceived (google Joseph Papp, Robert Moses). It is visited by more people than any other urban park in the United States and is a historical treasure which sports a wide variety of buildings and architectural elements which complement the natural setting. 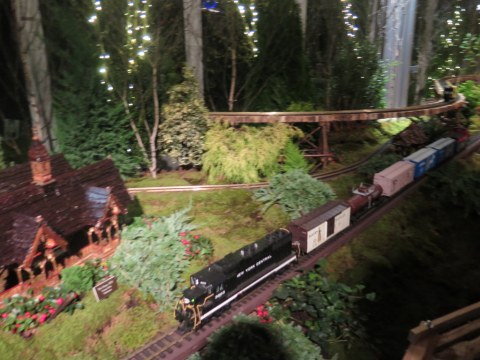 Most importantly, Olmsted and Vaux’s “Greensward Plan” inspired cities across the country to set aside large open spaces as public parks with the intention of giving city residents respites from the heat, dust and sun-scorched open spaces absent trees which were cut down haphazardly for developer’s convenience and profits. Since then urban centers have noted the value of trees and cities like NYC under Mayor Michael Bloomberg are assiduous about their care, pruning and planting of trees in the city. To take one down is a major event that requires petitioning the city government. 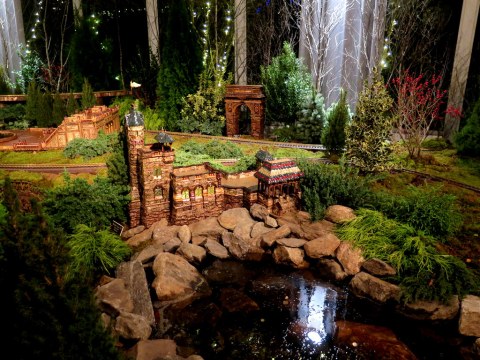 Whether you visit The Holiday Train Show® in the daytime or the evening (which is actually when its mystery and beauty are®® most remarkable) you will see a number of changes in the Central Park display. The Belevedere Castle has been refurbished for this year’s show. The Castle was built as a Victorian “folly” (not having a utilitarian purpose) on the highest natural elevation in the park and includes Gothic, Romanesque, Chinese, Moorish and Egyptian motifs.

Bethesda Terrace opens on the Lake at the heart of Central Park with the Angel of the Waters sculpture crowning the Terrace’s lovely Bethesda Fountain. An interesting note is that the designer of the sculpture (Emma Stebbins-the first woman to receive a public art Commission in NYC) placed a lily in the angel’s hand to signify purity and recall the importance of Croton Reservoir and the Croton water system which supplies NYC with fresh, clean water since 1842 up until today. 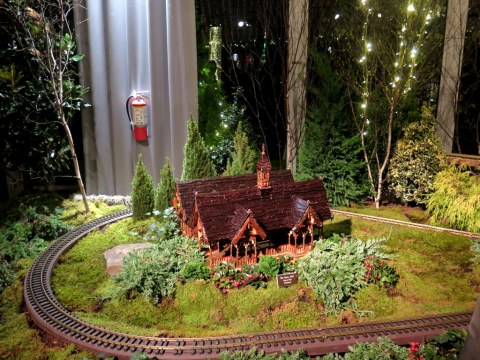 The Dairy has been enlarged and brightened. It is a replica of the Central Park “Dairy” built in 1870 as a place where children could enjoy a glass of fresh milk which was not easy to acquire in NYC at the time. The Naumburg Bandshell is a neo classical structure of cast concrete built in 1923. Performers Irving Berlin, Duke Ellington and the Grateful Dead have played there, though now it features mostly classical musicians and classical concerts. The Swedish Cottage Marionette Theater, the Old Bandstand, the Bow Bridge (the first cast-iron bridge in the Park) and Oak Bridge are in the Holiday Train Show®. The two bridges are new to the collection.

There are more than 25 G-scale model trains and trolleys that jet along nearly a half-mile of track past the history of NYC exemplified in these replicas of magnificent buildings from the 1700s to the 21st century. The five bridges towering over the heads of the visitors are constructed from plant parts and birch twigs then shellacked to maintain the life of the recreation. The bridges usually link into each borough that they grace: Manhattan Bridge, Brooklyn Bridge, Hell’s Gate, George Washington Bridge and the Queensboro Bridge.

Bar Car Nights are a favorite to experience in the Garden in the brisk, festive evenings during the seasonal delights of The Holiday Train Show®. You can purchase a spiked hot chocolate or Holiday specialty cocktail from one of the festive bars throughout the area. If you are interested in snacks, you may get an offering from the Bronx Night Market Holiday Pop-up (they have yummy pulled pork sandwiches and veggie menues). After you’ve eaten you may walk with your drinks to the artisan ice carving whose expertise will astonish you as he carves large figures in ice. There are festive performers, contortionists and acrobats from the American Circus Theatre doing balletic moves or flips; and in past years there have been stilt-walkers. After sauntering by the confers you will reach the Levon Levy Center where you may warm up at the handcrafted fire pits. And if you stop in to the Pine Tree Cafe, you can enjoy a sing along with dueling pianos. There is also dancing to DJ sets curated by Uptown Vinyl Supreme. 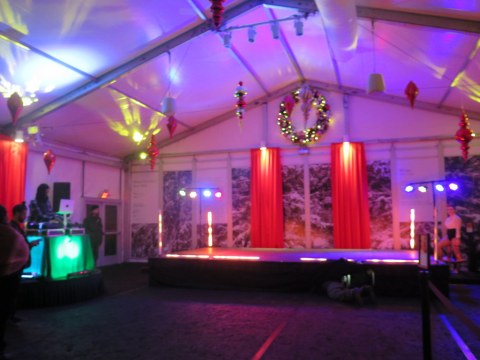 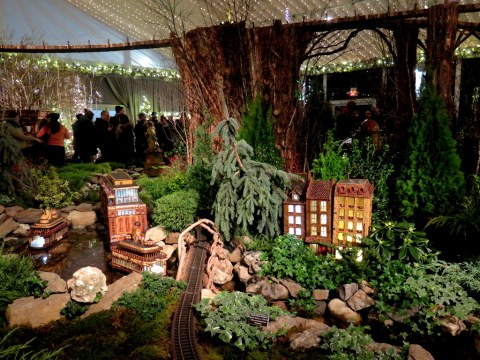 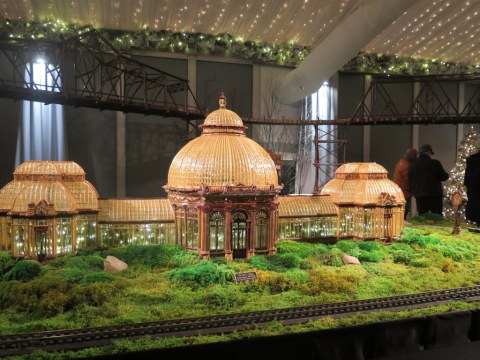 There are so many activities at the Garden during the winter season and the presentation of The Holiday Train Show®, noting them all will make your head spin. I’ve mentioned a few here, but rest assured there are other events. The most popular events have add-ons and new events promise more enjoyment for the entire family. Some of these include the Evergreen Express events in the Everett Children’s Adventure Garden, Sounds of the Season Performances, Annual Bird Count (December 14, 2019, at 11:00 a.m.) The Poetry of Trains: Billy Collins and Young Poets (Sunday, December 15 at 2 p.m.) Holiday Favorites Film Festival, Winter Wonderland Tree Tour, Holiday Landmarks Tour, and All Aboard with Thomas & Friends™.

Members Holiday Shopping Weekend will be on December 14 and December 15. And members early morning access will be every weekend and December 26 & 27. If you don’t have a Garden membership, in these trying times, do your soul some good and purchase one. You will have free access to the Garden and depending on the type of membership, you will be able to bring a guest or guests and have access to free parking which can add up. You also receive a 20% on member shopping days, like December 14 & 15.

For additional information on exciting events and additional programming during The Holiday Train Show® CLICK HERE.