← ‘Greater Clements,’ by Samuel D. Hunter at Lincoln Center Theater
‘How to Load a Musket,’ a Striking Look at History by Talene Monahon at 59E59 Theaters →

‘Maz and Bricks’ by Eva O’Connor at 59E59 Theaters 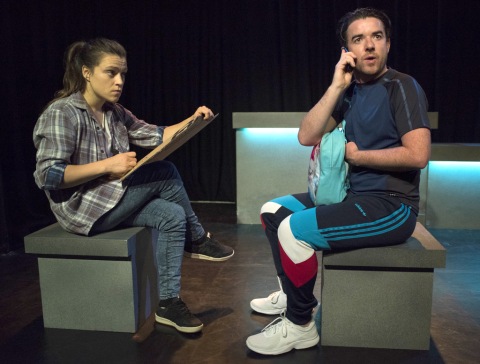 Maz and Bricks by Eva O’Connor takes place on a tram, and on the streets of Dublin over two days in 2017. Its setting is monumental because at this time, the campaign to repeal the Eighth Amendment of the Constitution of Ireland was at its height. Because of the popular support, reflected in the protests to repeal the amendment which banned abortion, the amendment was repealed in 2018, and a women’s right to make decisions about her own body was solidified under the law.

During the campaign, Maz, who is on her way to a massive protest in Dublin to repeal the constitutional abortion ban, meets Bricks. Their initial meeting filled with conflict and humorous, verbal smackdowns becomes the linchpin that changes both of their lives.

The production presented by Fishamble, The New Play Company, won an Olivier Award and is in its US premiere at 59E59 Theaters, as part of Origin’s 1st Irish. Experiencing the 80 minute production which has no intermission, a minimal, spare set and fine staging, one can understand why it is an award-winner. First, it is directed with precision and sensitivity by Jim Culleton. Secondly, O’Connor’s titular characterizations lure us with their vitality, and surprise us with their raw likeability. The play is well crafted with continually dynamic interchanges by the characters and an unadorned, satisfying, character-driven plot development, with powerful themes that hold currency for our times. 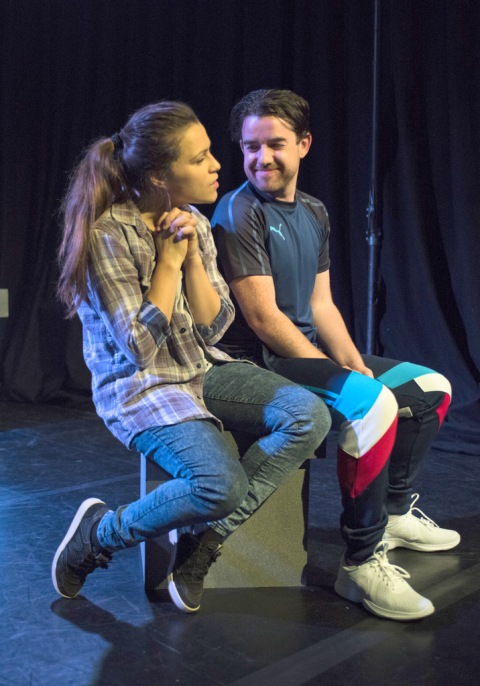 Thanks to the superb performances by Eva O’Connor (playwright) who also performs Maz, and Ciaran O’Brien as Bricks, we are led on a journey that moves deeper into the minds and hearts of these individuals, as they become acquainted, gain interest in each other, bounce apart, then couple together in mutual respect and caring. By the conclusion of the production we note how “in the twinkling of an eye, at the last sound of the trumpet,” individuals can open up and help each other reach a place of authenticity and healing, that they did not realize they could reach in themselves alone.

Upon first meeting Maz and Bricks, we are struck by Bricks’ over-confidence, braggadocio and utterly loutish behavior during a phone conversation on a tram, which one needs ear plugs to ignore. When Maz calls Bricks out for his “wildly inappropriate behavior,” and reveals that she is finishing a placard about a nineteen-year-old who died because she couldn’t get a legal abortion, Bricks recoups himself, twits her and tries to smooth over Maz’s attitude by sharing details about his life. After this meeting where he discovers her name and tells her his, the characters, in open monologues to the audience, share their perspectives about the meeting and then describe the next steps as they make their way through their day’s events. Maz goes to the protest; Bricks goes to Lara’s (his X partner) to pick up Yas, his daughter, to take her to the zoo.

The monologues are in rhymes which rhythmically play out with vibrance and power, adding interest and keeping the audience focused at their novelty. Bricks describes how Lara prevents him from his seeing their daughter because she heard about his untoward behavior with her cousin. Bricks’ forthright manner, as he eventually tells the truth to Maz, is a turning point. The playwright exacts a shift in Bricks’ characterization from the lout to the individual underneath the mask. We note his vulnerability, insecurity and upset at not being allowed to be with his daughter, whom he loves. We understand that the cousin may have set him up, so that Lara might punish him using Yas, a cruel action. Desolate, Bricks ends up at the protest. He is just in time to stop Maz from getting into trouble throwing stones at the anti-abortion protesters. 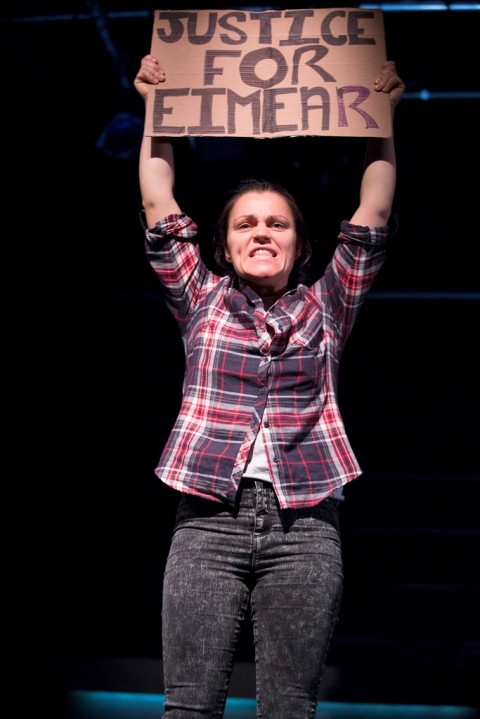 As they thrust and parry, with jibes and humor, O’Connor evolves the dialogue between these two flawed individuals. She heightens the monologues in a unique way so that the characters step away from the action, and with thoughtful, sometimes philosophical commentary, bring themselves to the next step in their relationship with each other. This is a clever device the playwright employs. It gives us the benefit of the characters’ inner thoughts to reveal their personalities and how their feelings relate to their resultant outer actions.

Thus, by degrees, we note the mystery of how Maz and Bricks, who appeared so antithetical to each other at the outset, find common ground with which to understand each other. They demonstrate that “opposites attract,” as Bricks indicates in his interest in Maz, who is unlike anyone he has ever known. However, once they find the raw and authentic centers of each other’s emotions, they realize they are not that different in their humanity and impulses toward decency.

The characters evolve in their relationship as they hang out with each other and spend the day. O’Connor uses their first interaction on the tram as a thematic prelude on a number of levels. She suggests that it is possible to compromise with others about political views, if one is open-minded and hopeful. That Bricks has an ulterior motive, turns into something deeper as Bricks tells us when he stops Maz’s stone throwing. He intuits that his interference, may lead to something between them. If not, he will crash and burn in humiliation. It is a risk he is willing to take. 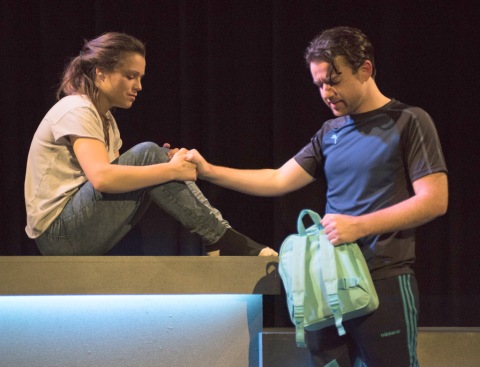 O’Connor’s characters grow more likeable in their interest and acceptance of each other, driven by acute direction and nuanced, spot-on performances by the actors. We believe that Maz and Bricks might care for each other in a world that is chaotic and filled with pain for them, as we later learn. However, in spite of the problems and turmoil that they must confront and do confront with each other’s help, theirs is a relationship worth saving and deepening.

In its conclusion Maz and Bricks is refreshing, satisfying and real. O’Connor presents themes about prejudice, open-mindedness, truthfulness and human dignity in respecting one another’s viewpoint and in “standing in another’s shoes.” It is a behavior that we sorely need to reflect upon and practice in the current, divisive, political climate in the U.S. and elsewhere around the globe.

Kudos to the creative team: Maree Kearns (set and costume design) Sinéad McKenna (lighting designer) Carl Kennedy (sound designer) who, with director Jim Culleton and the actors, have made this a must-see production. Maz and Bricks runs until 23 February at 59E59 Theaters, Theater B. This is one you won’t want to miss. For tickets and times, go to their website by CLICKING HERE.

← ‘Greater Clements,’ by Samuel D. Hunter at Lincoln Center Theater
‘How to Load a Musket,’ a Striking Look at History by Talene Monahon at 59E59 Theaters →