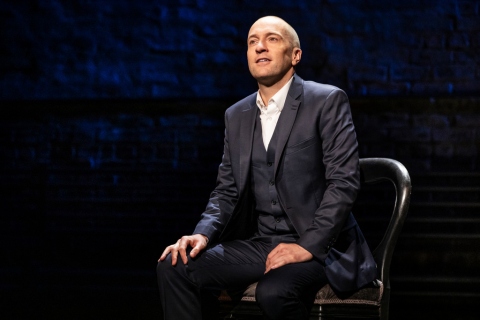 Derren Brown SECRET  in its first time on Broadway at The Cort Theatre is nothing short of brilliant. Every illusion that Brown performs to perfection with scintillating charm and lightening smoothness, I have figured out! No! I haven’t. But I am still trying my damnedest two days after I saw Wednesday night’s show. And I am completely frustrated because the only way I will ever know is to ask Derren Brown or another magician to affirm whether my explanations might be correct. So, I’m at an impasse. However, I may know “the secrets” if I research/practice mesmerization, hypnosis and psychological manipulation or read about Brown’s iconic mind control exploits in the UK, which are each one of them harrowing “mind fucks” of entertainment that end up being great, harmless fun. Hmmm!

From convincing middle managers to commit armed robbery, to sticking viewers at home to their sofas, Brown may be one of the foremost masters of mind control in the world. Indeed, he makes President Donald Trump look like a crass sharpie. Thankfully, Brown is a mild-mannered English gentleman with a posh accent who paints and obviously enjoys what he does and will not run for the U.S. Presidency. If he ever does, the country would be in… Well, actually, perhaps he should run. Too bad there is a citizenship requirement. His honesty alone would be absolutely refreshing. 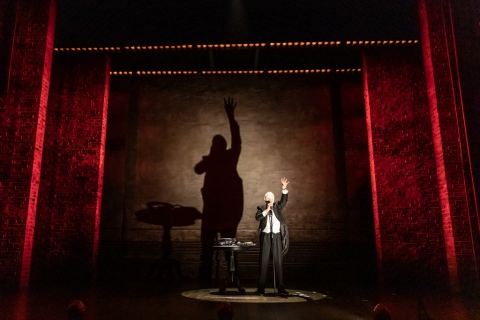 Seriously, Derren Brown is no joke. He is awe-inspiring. And this production will win awards because it is a lesson in human experience, crowd psychology, mind control, the power of suggestion and one’s inability to resist what is already in the unconscious, especially if one attempts to resist it. That is to say, the show is a lesson not only in illusion and mind manipulation and the mysterious, it is above all a lesson in audience participation and a revelation of you as an audience member in a dual role of watching yourself in all your unsubtle susceptibility and experiencing your psychological weaknesses.

It must also be a learning experience for Derren Brown. Indeed, he is always perfecting his artistry, honing his senses and his psychological talents. Whatever it takes to uplift his craft and ability to gauge the audience and manipulate them to a heightened interactive performance so that they stay in dynamic one accord, Brown appears to be pursuing this to the highest degree.

The audience’s “one accord” changes which makes each and every performance fabulous. Diverse audience members are a historical treasure of synchronicity and singularity. To bring audience members “there” who come with unusual lives and schedules and backstories is an impossibility made possible by their will and desire to be “there.” So to say that each night of Derren Brown SECRET is unique, is an understatement. An understatement of understatement. The audience’s and Brown’s particularity is what places this show at the pinnacle of live solo performance. Because of this exceptionalism Brown has deservedly won the Drama Desk in 2017 for his debut show, Secret. And he has won two Olivier Awards and five nominations. a record for one-person shows since the inception of the Olivier Awards.

Derren Brown SECRET showcases the illusory as high artistic execution. Brown begins the first act by reminding us that in our minds the world we live in is our own definition/explanation/fiction. Our perception is our choice, what suits us, probably learned or rejected or somewhat retained from our parents and/or the culture is ours and ours alone.

These moments of wisdom Brown employs throughout to gain our confidence and convince us that he is on our side. Of course his honesty and wisdom relaxes and blinds us to our own susceptibility to ourselves. It is a glorious misdirection, a mesmerization. Indeed, throughout the show, we will forget what we have just witnessed in plain sight and remember only unconsciously that which is inaccessible. The joke is on us and we laugh, yet are unsettled. Is this what is going on all day, every day, at work and at play? Oh, my God!

I watched carefully, so “out of the corner of my eye” in my peripheral vision I saw, what Brown told us would happen, then forgot I saw it. Yes, it did happen, but I missed it. Twice! Brown upends, distracts, and with verbal legerdemain disappears the visible, all the while warning us what to expect. His honesty is treacherous and exciting. 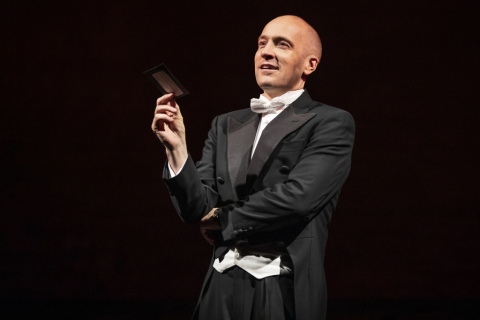 This is also a production in encouraging an audience member’s humility. Whenever I think that “I’ve arrived,” all I have to remember is a gorilla and a banana and Derren Brown to deflate my self-important arrogance. To understand what I mean, you must see the production. There is no spoiler alert.

Completely necessary for this show’s success is audience trust. Thus, to elicit audience participation to a maximum of effect, a good deal of this unparalleled production includes mentally massaging the audience which Brown does surreptitiously; he is a cypher with fragrant oils, gentle, quick hands. Meanwhile, this congeniality brings out audience interactions and responses which are authentic, humorous, genuine, unaffecting, human, all guided by Brown with adroit good will.

Audience interactivity and seeming spontaneity are rather “a character” along with Brown, whose persona is confident, wise, gently suggestive, witty, comfortable and youthfully avuncular. The audience responds by going onstage, as well as by thinking and sitting in their seats as they watch close-up projections of what is going on via the back wall. If you are in the audience, whether Brown chooses you to join a few others onstage for various illusions, or asks you to think of a celebrity, or asks you to think of a question for him, or write a question, or catch a “frisbee-thingy,” you are involved mentally, though you might passively think you are simply observing. And if you go unconscious and sleep? You are really interacting; you may stand up and walk down the aisle toward the stage!

I can only suggest the aftereffects of his mysterious illusory psychological craft and a bit of my amazement at the audience’s hushed, unified, “mind field” response in an example that is glorious and indescribable, though I will try. During the show Brown offers autobiographical information as patter to endear us to him. The story he shares about his deceased grandfather who enjoyed mysteries and magic is charming, humorous and a bit heartbreaking as Brown relates, it lovingly. Then Brown incorporates this story in an illusion. The night I was present, this involved bringing a woman participant on stage. Brown asked her a few questions about her relationship with a grandparent.

Brown crafted an extemporaneous event with the woman participant involving the audience in its creation. During these sterling moments the attentive audience, the woman participant and storyteller Brown become spectators in a joyous fabrication that was unimaginable beforehand and unfathomable after Brown concludes with a philosophical, metaphorical and mysterious flourish. From start to finish the entire audience was breathless, engaged, inspired and the woman participant was gobsmacked.

For those lovely moments, Brown returned us to the innocence of childhood in our first heartbeats of wonder. That is one of the beauties of this production, Brown’s continually igniting our imagination to fly to the realms of the supernal. But Brown does set us gently down into reality, afterward. We know we’ve been “had.” But it’s ok. Maybe we’ll become more learned about ourselves and more forgiving of our susceptibilities to return to a true place of wonderment after-all.

Explaining such illusions spoils the fun of the unknown. That’s why Derren Brown SECRET is celestial. The show is a mystery, wrapped in a box (like one of the illusions) of riddles filled with the fantastic and there are no explanations. Even the ushers are sworn to secrecy. I’m still trying to shake the thought that I’ve been screwed with mentally as I love to figure things out, and I’m annoyed that I’m not quite there yet. But that’s a part of what the power of suggestion does. Someone suggests. The more you fight it, the more you are hooked. Better to go with the flow and then the extraction from the spider’s web will come in due time.

Brown is an ADEPT. He mesmerizes in the direction you think you are going then find out that you are somewhere else completely. He is dastardly, wicked fun and the evening disappears like a shot. Maybe I need to return to “get” what I missed. But what if I miss it again? More frustration!

Of course that’s one of the many points that Derren Brown, performer and co-writer (with Andy Nyman and Andrew O’Connor who also directed) makes in this starry-minded, ephemeral, psychically untouchable production. Intriguingly, if you think that the audience has been planted with Brown’s co-conspirators to effect his “stupid pet tricks,” that is a simple yet profound error prompted by frustration. Unless you are an exceptional mesmerizer yourself and are a genius at misdirection and ledgerdemain like he is, you will not arrive at an explanation. But why even bother? It is a fabulous joy being returned to child-like innocence where all manner of spiritual mysteries are real, having been beaten out of us by ourselves after whatever ill wind blows.

Kudos to the creative team who enhance the enjoyment all the more: Takeshi Kata (scenic design) Ben Stanton (lighting design) Jill Bc Du Boff (sound design) Caite Hevner (projection design). Derren Brown SECRET runs with one intermission at the Cort Theatre (West 48th Street between 7th and 6th) until 4 January.  I dare you to go!!! For tickets and times CLICK HERE.