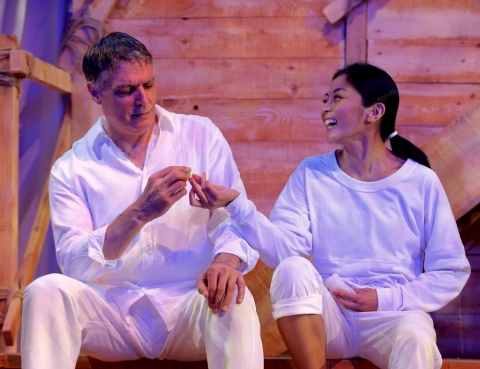 The Gingold Theatrical Group noted for its Shaw productions is presenting Caesar & Cleopatra directed by David Staller at Theatre Row. The production is a tightly crafted, well-acted revelation of the historic and intriguing relationship as Shaw conceives may have unfolded between Cleopatra and Caesar. Having thoroughly researched their history to examine both their humanity and extraordinary genius, with economy, Shaw reveals individuals worthy of his depiction in interest, humor and vitality.

The production shepherded by Staller winningly presents the dynamic relationship between Caesar and Cleopatra which engages us with Shaw’s novel/fictional approach toward these icons as he generally follows historical events. The Gingold Theatrical Group has slimmed down Shaw’s version keeping the most salient scenes and consolidating characters providing narration by Ftatateeta (Brenda Braxton in a powerful performance) at the beginning of the production and throughout to fast-forward events and comment on their sequence with poetic persuasion.

Caesar is portrayed by Robert Cuccioli whose presence and manner is believably confident, relaxed and princely even after the exhaustion of having just led his troops to conquer the Egyptians. However, knowing anything about Caesar before Shaw’s revelations at this point in the leader’s life, one realizes his personage that was incredible in stature and nobility was acquired over time. His popularity as a leader was grounded upon his military experience and wisdom bringing success to Rome in extending the Roman Empire. Cuccioli acutely engages as he renders this portrait of a man who doesn’t believe himself past his prime. As Shaw has drawn him and as Cuccioli so aptly portrays him, he sports humor, is playful yet has the perspicacity to note that the vivacious, lively teenage girl at the feet of the Sphinx must be Cleopatra, though he twits her about it after he realizes who she is.

Nevertheless, Caesar astutely withholds his identity, takes charge, and gains her confidence using her information to apprise himself of the situation. With his non-threatening, non-egotistical, down-to-earth demeanor, Cuccioli’s good-humored Caesar sets the very human rules of his budding relationship with Cleopatra which will serve him in stead as he fulfills his plans to set her on the throne of Egypt and further extend the acquisition of Egyptian lands under the control of Rome. Their’s is friendship, a mentorship, and an affectionate liaison which largely remains political in scope as the life and death stakes are high for both of them. It is a union which is beautifully drawn by Shaw and credibly acted by Lim and Cuccioli.

For her part, Teresa Avia Lim’s Cleopatra follows the arc of development that Shaw has delineated for her, revealing her growth from a child who is reckless and afraid, to a Queen tutored by Caesar in her bearing, wisdom and commanding presence. The scenes between Cleopatra and Caesar are the most fascinating, and Cuccioli and Lim authentically portray the concern, affection and nobility of both individuals as they tug at each other’s strengths and weaknesses. As Lim’s Cleopatra learns how to perceive herself a Queen and believe it fully, Caesar guides her to this end yet is warily empowered to overcome the dangers of the civil strife that threatens in Egypt in the rivalry between Ptolemy and Cleopatra for the throne and the betrayal of Romans who have been compromised by Egyptian leaders.

Ptolemy (humorously effected as a puppet of Pothinus) and Pothinus are the villains in Shaw’s work. Perhaps, Rajesh Bose as Pothinus/Ptolemy is too unctuous and oily to empathize with. However, Cuccioli’s Caesar remains respectful and accommodating lifting Pothinus’ stature, however, annoyed, enraged and jealous Cleopatra is of him as her brother’s controller and representative.

As supporting players Rufio (Jeff Applegate) Britannus (Jonathan Hadley) and Apollodorus (Dan Domingues) provide action and sometimes comic relief in furthering the events when Caesar must grapple with the Egyptians, settle for a time at the lighthouse of Pharos, bring Cleopatra in a carpet to him and eventually swim away from the island to save themselves from the Egyptians who are in fast pursuit until a Roman boat rescues them. The adventures continue as they stand up to the Egyptians because of Cleopatra’s actions in killing a favorite and the annoyed Caesar must sustain the fallout as he and his men keep counsel and strategize after realizing the siblings hatred for each other in a dual rulership will never work.

The scene when Caesar chides Cleopatra for her lack of clemency is thematically sound and a highpoint of the production along with the various scenes of action. We note Caesar’s wisdom and strength to pardon his enemies and convert them to friends, ignoring looking at incriminating letters Ptolemy has written. Caesar as a man of action with better things to do scorns wasting his time with prosecutions, preferring negotiation and the softer touch to co-opt those who can most do him harm. This is a strength which Cleopatra finds difficulty believing in or duplicating with her own brother and his followers. 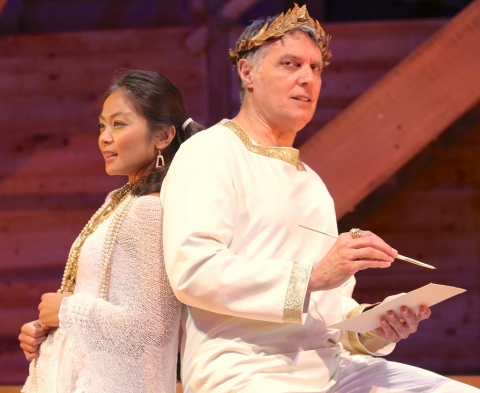 When Roman reinforcements save the day and Caesar prepares to depart, he promises Cleopatra he will send Mark Antony to her and the rest is “history.” Caesar has proven to be an exceptional tutor in politics and power and Cleopatra has learned as much as her personality will allow. Interestingly, we see the seeds of destruction for both individuals in this play. That Caesar does not wipe out his enemies comes back to haunt him, for the conspirators he pardoned (Cassius, et. al) end up assassinating him.

Cleopatra’s yearning for Antony to be with her (a major flaw in her character is her loneliness) ends up destroying their love and bringing their downfall after Mark Antony does follow Caesar’s bidding to go to Egypt and check on the territory that is under Rome. Shaw plants the seeds of this weakness in Cleopatra at the outset of the play and reveals she never quite overcomes this need which is manifest in her searching for Caesar’s attentions which he can never fully give her because he is too involved in military actions and governing wisely or guiding others to govern wisely without malice and revenge.

This amazing relationship that Shaw has drawn concludes with the only kiss that we see. Caesar gently delivers it to Cleopatra’s forehead and claims he will never see her again. At that Ftatateeta sends the audience out into the night with a rejoinder of peace.

Kudos to the cast who is committed to fine ensemble work and the director who guided them to it. Kudos also goes to the creative team whose efforts assisted in elucidating Shaw’s themes and incredible characterizations. These include: Brian Prather (scenic design) Tracy Christensen (costume design) Jamie Roderick (lighting design) Frederick Kennedy (sound design).