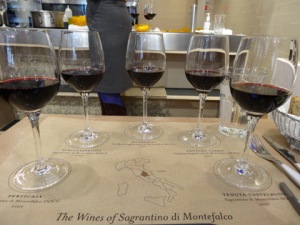 If you are a red wine drinker and like to try fine wines that have a robust flavor, then Sagrantino wines will list among your favorites. The Sagrantino grapes are small, finicky powerhouses, but despite their needing much care to properly cultivate in their indigenous Italian region, California, Australia and other areas of the world are jumping on the Sagrantino bandwagon. As they try their hand at producing the bold red wine which originated in Montefalco in the province of Umbria, Italy centuries ago, they will tease out its richness and unique characteristics.

Montefalco Sagrantino is a wine that is appropriate in every season. It is distinctive, flavorful, and vibrant and has an interesting finish on the palate. It pairs well with wintry fare of stews, roasts, short ribs, as well as summery grilled meats and chops. It is lovely with rustic and hearty vegetable and pasta-dish combinations. It also goes well with appetizers like cheeses and salumi and is a highly drinkable accompaniment to foods that are sweet or salted. 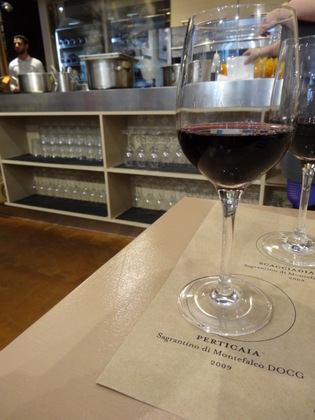 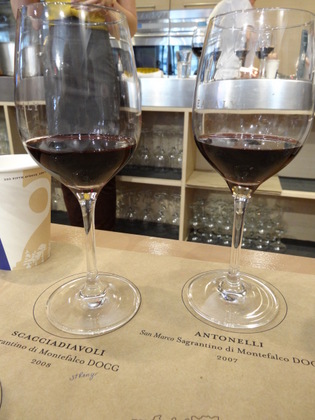 Five Monetfalco Sagrantino producers are being offered at the Friday tastings. I had the opportunity to try each at an event at Eataly’s La Scuola during which various producers were present. Rebecca Mills discussed the wines, the food pairings and the producers Marco Caprai of Arnaldo Caprai Vineyards and Filippo Antonelli from Antonelli San Marco filled in with salient facts about their wines. 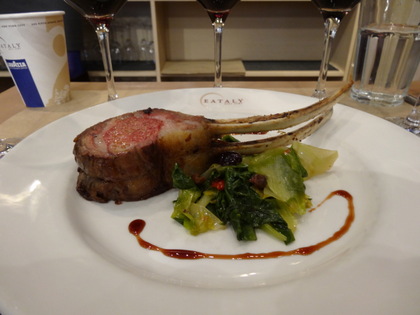 Agnello allo Scottadito con Zucca al Forno (Lamp Sottadito with Roasted Squash). Loosely translated, scottadito means “burnt Fingers.” The inference is that these little chops are so irresistible that you go for it before cooling. Even well done these are fabulous and they are perfect with Sagrantino.

Alicia Walter chef from Eataly in New York City, created the dishes which paired beautifully with the wines. They were the Sagrantino di Montefalco DOCG wines, 2007-2009 vintages from the five different producers in the Montefalco region of Umbria now being featured at Eataly in March.

The DOCG designation for each means that the wines must adhere to the highest production standards. The wines are produced from 100% Sagrantino grapes grown in Montefalco. The regulations include the specific months in the barrel, an October harvest, and the agriculture of the vines (number of vines per hectare).

You will be able to purchase these producers wines at Eataly NYC and at other fine wine shops in NYC, Chicago, San Francesco and Los Angelos. Their websites are above and you can place orders there. Better yet, travel to Umbria, visit these producers’ wineries. They will be happy to offer tastings and tours of their vineyards. However, if you aren’t planning a trip in the near future, drop in to sample the Montefalco Sagrantino at Eataly NYC or Chicago this month. As you open up your palate to these unique wines, you will note their different personalities, and you will probably walk away with a bottle of pure Montefalco Umbria. You will be glad you did.