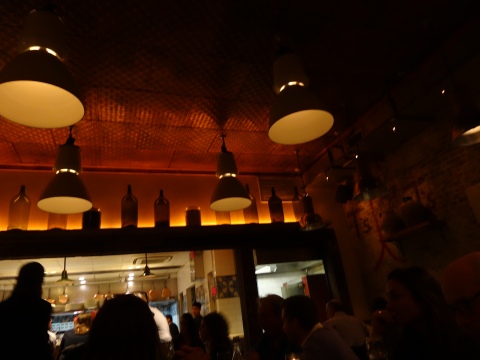 Il Buco Alimentari et Vineria view of the kitchen from where we were seated.

Ever since I went to a wine tasting of Marco Capri wines last year at Il Buco Alimentari et Vineria, (Facebook page),

I wanted to return and sample more of Chef Justin Smillie’s fare. A friend and I share the same birthday, so we decided to go for dinner and were happy we did. We received the royal treatment.

Following recommendations from New York Times, Foursquare, Immaculate Infatuation, and my own experience the prior year, I was completely thrilled with the dishes I ordered as were my friends. So were our neighbors at the table sitting next to us. Repeat diners they were ecstatic with their “to die for” Porchetta Alla Romana. The previous couples had scarfed down the “Spit-roasted Short Ribs” and left an large empty plate of the remains of the dish which was the main rib bone. Hmm. I was encouraged.

Il Buco Alimentaria et Vineria with the camera viewing the opposite direction from the kitchen.

The decor is rustic and the atmosphere is relaxed. We sat in a section that was family style, conducive to speaking to your neighbor which is fun because I am nosy. I like viewing what others have ordered and if the group is friendly I will ask about their enjoyment of their various dishes. This homely, family style approach is what I think is the beauty of this restaurant which guys really love because it is not self-aggrandizing, nor pretentious. Indeed, it is an informal wine bar and restaurant that serves breakfast, lunch and dinner.

In answer to those “foodies” (?) outraged that the New York Times gave it three stars  because they thought it was like a sandwich shop (see the reference in Immaculate Infatuation), I would say that perhaps they are less flexible and more into their own pretension and conceptualization of “branding” than gorgeous tasting food. The idea of a market section up front where one can buy some of “the best salumi della casa in NYC, gelato, and other home made products beggars their idea of “three stars.” Well, I’ve gone to Michelin starred restaurants and the food was neither deliciously prepared nor were the elements combined well. So, it’s all in the perception and it brings to mind that with regard to restaurants, sometimes, the emperor is naked (The Emperor’s New Clothes) but no one wants to say it.

Bread basket, we’ve devoured most of the bread.

Back to our meal. First, came the basket of bread. If you adore crusty, substantial and sumptuous bread, Kamel Saci creates his bread’s magic from his own recipe and bakes it on the premises. Add Il Buco Extra Virgin Olive Oil, which is green, fresh and exceptional and you are home. My birthday buddy adores bread, so she was in heaven. If your taste doesn’t run to olive oil, and you’re a dairy fanatic, they will bring you delicious, fresh butter to spread on the fabulous bread.

We had appetizers and sides and then for some of us the Primi was the main meal and others, the Secondi.

Lattuga was just what I wanted: little gem lettuce, pickled onions, anchovies, tarragon, red radish. The combination of ingredients melded beautifully and seasoned with the unique taste of the tarragon. The lemon dressing was light and accentuated the freshness of the greens.

The Crispy Artichokes with lemon were wonderfully delicious. They were thin and curled by the char and dark browned to a perfect crunchiness. My friend who thought the gem lettuce was “romaine” which she hates, selected these as a veggie. There wasn’t a crumb left on her plate after we each had a little taste. 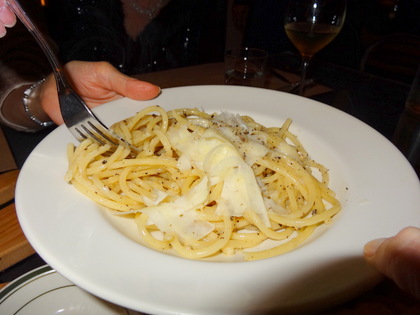 The Bucatini Cacio e Pepe is pasta setaro with fresh pecorino romano and black pepper. The pasta is all home made on the premises and was of course, perfectly al dente. My birthday buddy Andrea said it was really good, a compliment that one does not hear often dropped from her lips as she frequently orders pasta dishes and they are mostly, (silence),  “OK,” or “good.”  She is a pasta fan and gave Emily and Margaret a taste, but did not share the plate with Emily who was a bit disappointed as she loves pasta. But the pasta was Andrea’s main course. Do you blame her for not wanting to share it? 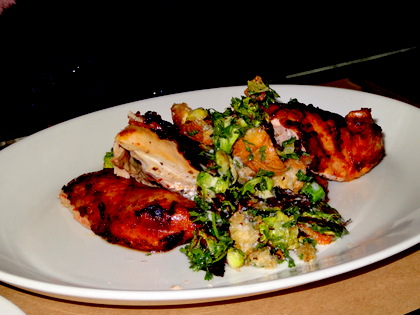 Polletto al Forno is poussin, roasted meyer lemon, capers and bread crumbs. Margaret thought this dish very good. Again, these are words I don’t normally hear, especially when they are said with the enthusiastic and emphatic pronouncement that Margaret made. Chef Smillie created the perfect combinations of ingredients and flavor textures and tastes with this dish. The beauty with all these dishes is that they are spot on, having achieved a regularity that is duplicated, without variation or unevenness. 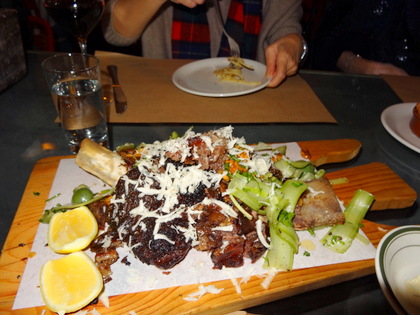 The Slow-roasted or Spit-roasted Short Ribs are like that as well. These are the rave of city reviewers everywhere, whether for lunch in a sandwich or for dinner. OMG! I say amen to that. I do think they are amongst the best short ribs in the city and in a portion large enough to share with four. They were cooked to tender, flavorful moistness, complemented by the castelvetrano olives, celery, walnuts, horseradish and lemon which, squeezed on the meat, was a wonderful, unique addition. This is Chef Smillie’s creation of perfection. I had been waiting for a year and it was worth it. Absolutely marvelous.

To round out our luscious main courses we added Contorni.

The Crispy Polenta was amazing, crunchy with the salty, pungent taste of the parmesian on the outside and moist softness with milder notes of the corn/polenta on the inside. This was a delicious and wonderfully different way to morph polenta which I have found tiresome when it is served the usual way under the short ribs or meat. Same, same, enough already.

Carrots salsa verde. These had an incredible and luscious char which combined with their sweetness and hinted of other seasonings. They too offered a taste that was exceptional and interesting. The carrot plate was empty by the end of the meal and the pieces of polenta that were left, Margaret took home for her husband. They were devoured that evening.

Fingerling Potatoes valdeon we didn’t try. I wish we noted them because if they were anything like their brother contorni, they were probably wonderful and unique also.

The remains of the Spit-Roasted Short Ribs. 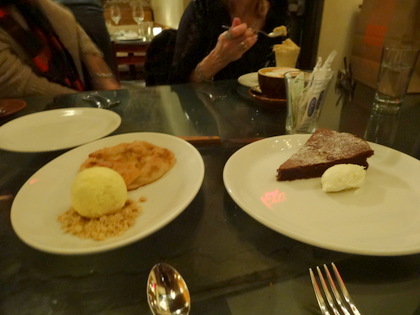 Our shared dessert was home made seasonal Fruit Crostata and Vanilla Gelato, and Flourless Chocolate Cake and Gelato. Yum. The espresso and cappuccinos rounded off the dinner.

Il Buco Alimentari et Vineria is a NYC treasure. (See menu which is seasonal and changes.)  And the beauty is you can go for breakfast, lunch or dinner. In fact the breakfast sandwich with 2 organic eggs, salame rosa, rupert cheese and focaccia fino is an incredible value. You will probably want to order a few Brioches for take away, since they go beyond originality in the flavor palette with the following varieties: “White Chocolate,” Chocolate Cherry, and Pistachio and Apricot Brioches. And then there are the Bombolone plain or filled with jam or dulce de leche. I don’t think it gets much better than this.