Gary by Pulitzer Prize finalist for Drama, Taylor Mac and directed by the prodigiously talented George C. Wolfe is WACK! (translation: cosmically brilliant, riotous, sardonic in dark and light) This uproarious “Sequel to Titus Andronicus” (Shakespeare’s first and bloodiest tragedy) is a brutal, intense, intimate play about body parts and indelicate body processes we don’t discuss in polite conversation with The Queen. Rich in themes and characterizations with a clever, twisty plot that surprises, it is also about much more.

To give us a handle in how to approach the mood and tenor of Gary, Carol (the sensational Julie White) comes in front of the once glorious, now shabby curtain and addresses the audience in Shakespeare’s favorite verse, rhyming iambic couplets. As Carol validates the how/why that Titus Androicus deserves a sequel, suddenly she spurts blood from a hole where her throat has been slit during the roiling events of the former play.

The absurdity of her discussion about a sequel that is more craven with gore than the original (while spurting blood) is titanically ironic and bounteously funny! Already, the playwright has set the mood and tenor between the horrific and rambunctious, as Carol’s unsuccessful attempts to stem the red flux poises the audience on a balance beam of tragedy and comedy. If this is the first of the production’s many moments of shock and awesomeness, we’re in for the long and the short of it. Let the rollicking fun begin! 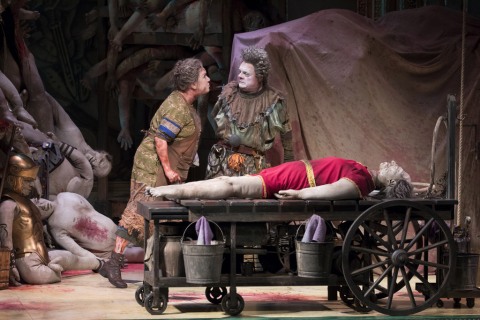 Conceivably, after every holocaust of war and massacre, someone has to clean up and set things “straight” again. In her wobbly, blood draining state, Carol brings up the curtain to reveal the debacle of bloodshed at the conclusion of Titus Andronicus. Then she totters off to bleed to death. The mounds and mounds of bodies piled up from the coup are staggering. There is one central mound of bodies to be processed, another pile of processed bodies and another under a sheet. Thanks to Santo Loquasto’s scenic design, everywhere you look there is the attempt to organize rotting flesh in the Roman banquet hall that is a temporary storage place of the dead. These number among them rich and poor, wealthy elites, citizens, officials, soldiers, rulers and others swept up in fierce fighting, civil war, apocalypse. Death does not discriminate.

The feast of death poetically will slide into a feast of celebration, for in a day, the hall will be the site of the new Emperor’s inauguration, another power transition. Into this macabre scene comes Gary (the incredible Nathan Lane who is a riot beyond description) a former clown who juggled live pigeons to little acclaim and no success. Things are looking up for Gary; he has a new job as a servant for the court. But what a job!

Having escaped a near death experience at the executioner’s hand by a lightening stroke of genius, Gary ends up in the hall for he told the executioner he would  help tidy up the catastrophe of gore by doing maid service. Little does he realize what cleaning up corpses entails, and when head maid Janice (the magnificent, moment-to-moment Kristine Nielsen) begins to show him, he recoils, reconsiders his choice and redirects his “ingenuity” in a different direction. He will not stay there long; he will rise up and go beyond maid service. He will become a Fool, the wisest of the Emperor’s counsel. 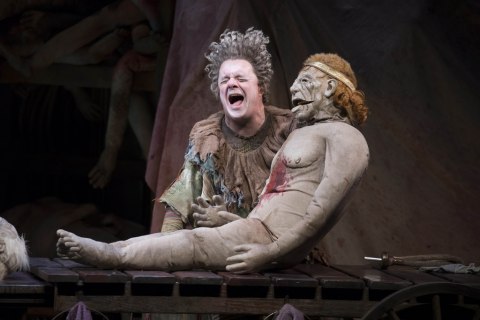 Meanwhile, Janice must teach loafer Gary the tricks of death’s work in the flesh. Grand experience has inured her to dealing with corpses, for she’s been cleaning up after each of the Roman wars for a long time. And Rome has been battling for decades. As Janice instructs Gary in “cleaning,” her fiendish efficiency at pummeling the gas out of the bodies to extract their farts is Nielsen at her hysterical best. Her antic machinations are real and horrifyingly, and equally LOL humorous, as she drains noxious body fluids showing Gary the difference between siphoning out the blood, and pushing out the poo. Lane’s Gary is priceless in his response to Nielsen’s Janice. The two actors are the perfect counterparts to make us roll in the aisles at their irreverence and seriousness.

From the outset, we understand Mac’s themes of class elitism and domination as the two maids disagree, fight and create their own rank to dominate, even as ridiculous as it is to fight over lead maid and subordinate. From the characters’ quips, jibes, demands, insults and resistances, we learn how beaten down the lower classes are through these prototypical plebeians who are the invisible, the disposable. But then again their disagreement if given latitude may rise to add their corpses to the pile and who then would be left to clean up the mess? The human condition to power over others defies class. There must be something better than this!

Though recovery from his near death experience sent him to a place of hell and damnation with Janice presiding as head monster maid, Gary holds to his enlightened state. He considers; maybe he can save the world and make it better, to stem the tide of wars and bloodshed. His revelation spurs him to attempt to convert Janice to his cause and show her there is something better in life than pumping poo and expelling gas from cadavers.

But Nielsen’s Janice is an incontrovertible martinet. What’s worse is she’s excellent at her job. She actually takes pride in her efficiency and refuses to revolt against the current social “order” or rise above it. She eschews and belittles Gary’s ambitions. She is insistent about keeping her place at the bottom of the social strata so she can stay alive even if she is a fart expeller. But as Gary questions the “life” she is leading, his presence and argumentative logic wear her down. As she processes the bodies and argues and commands Gary, she erupts with aphorisms and sage comments indicating that perhaps there is a shaking going on in her soul. Perhaps dealing with death has made her wise after all and prone to hope as well.

Carol shocks Gary and Janice joining the scene, having survived bleeding to death in a second near death experience to match Gary’s. She adds to the hilarity by confessing her “sin” that she missed an opportunity to save a life. With distraught fervor, White’s Carol cries out a refrain of her “sin” at pointed moments during the conversation with Janice and Gary. Each time she erupts in a whining cry (no SPOILER ALERT, SEE THE PLAY) she is marvelously, brilliantly funny. And yet, we feel for her and “know” we would not have behaved so cruelly and cowardly as she did. (NOT!) But she, too, can be inspired to change.

White, Lane and Nielsen send up his extraordinary satire on death and the tragedy of the human condition to fear, hate, revenge and murder. And finally, they do what Gary persuades them to, with Janice convinced of the rightness of his enlightened suggestions.  The characters create an “artistic coup” and turn the tragedy of humanity (in Titus Andronicus) into an absurd comedy sequel, where the audience laughs at itself and reverses the cycle of hatred, killing and violence. 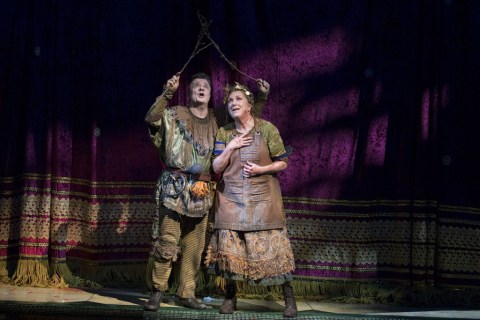 Indeed, Mac and Gary parallel in their intentions, as Gary states in creating his artistic coup, that it’s an “onslaught of ingenuity that’s a transformation of the calamity we got here. A sort of theatrical revenge on the Andronicus revenge.” Thus, this ‘Sequel to Titus Andronicus’ is a comedy bubbling up from a tragedy and the production ends with hope sparked from a clown and mid-wife who had a second chance at life to encourage a maid who was enduring a living death.

Though the pallid, fake, pokey corpses are stripped or dressed as Romans and the setting is in the latter days of the Roman Empire, Mac’s message is clear. This is us! This is now! The more ridiculous-looking and absurd the “cadavers” appear, the more death and war hover in the “unreality” of the piles of staged dummy corpses. In displaying the morbidity of violent effects, the production is precisely pacifist. But it is also a “Fooling.” So…interpret as you will.

Mac, with acute, dark wit creates his new Mac-genre-“Fooling” and reminds us how we “play” with our own mortality and that of others by taking our lives for granted. As invisible as one may feel in light of the culture’s social and political corruptions, there is always hope. There is always something one may do to rise above and use one’s genius to help others. The fact that Gary plans an “artistic revolt” to convert tragedy into comedy suits for our time.

The production rises to the heavens buoyed up by the fabulous talents of acting giants Nielsen, Lane and White shepherded by the superb Wolf. I could write volumes about this work and the humane, sensitive and completely organic performances by Nathan Lane, Kristine Nielsen and Julie White that are “over-the-top” impeccable. I cannot imagine anyone else in their hyper-hilarious, exhaustive, and energetic portrayals.

Wolf and the artistic team display the playwright’s vision and sound the alarm with energetic gusto. Can we luxuriate in continued economic class struggles, power dominations which set up the inequities between the rulers and the  ruled? Why must the “inconsequential” and “invisible” under classes continuously put up with what their “betters” have wrought to satisfy their own lusts, while destroying most everyone else and above all themselves in the process? It is a wasted institutional genocide that no one escapes. Are we not better than this? The characters try to prove they are. Bravo to the actors for bringing them to loving life.

This production is profound. Its humor is beyond hysterical, of the type that makes you laugh through your tears, and cry laughing. Its loving stroke will blind you and make you see again. In its irreverence, cataclysmic indifference about the dead, and twitting of the frailties of humanity’s proclivity to murder, exact revenge and make war, it is an indictment of the “upper” classes (the audience is mentioned as part of the court) and vindication of the lower classes who put up with them. In short it is irreverently ingenious. Every arrogant, billionaire narcissist should see this “Fooling.”

Gary runs without an intermission at the Boothe Theatre (222 West 45th Street) until 4 August.  For times and tickets go to the website by CLICKING HERE.