‘Rinse Repeat,’ an Intense, Riveting Exposé of Illness Perpetuated by a Family in Crisis 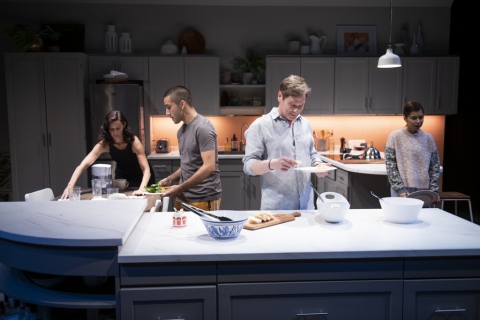 Domenia Feraud’s brilliantly constructed, intimate and fascinating Rinse Repeat, is about one woman’s attempt to grapple with a disease pervasive in our culture, but which few discuss and many keep hidden. Feraud’s play at Pershing Square’s Signature Center (The Linney) receives a cogent, eye-opening, much needed rendering in this astounding production expertly directed by by Kate Hopkins and exceptionally acted by an “in the moment,” acute, dynamic ensemble..

From the outset when Rachel (Domenica Feraud’s portrayal is specific, highly tuned and real) enters the home she has left for a season to return to her family, we are gripped by her tentative steps, her unsettled, hesitant manner. Surely, her unease comes out of something which has happened there; her expectation hovers in the air like a darkened cloud, and we pick up her imbalance which leaves us in a hushed suspense.

All this is put to rest, however, when beautiful mother Joan (the superb Florencia Lozano) and warm, loving father Peter (the heartfelt and engaging Michael Hayden) greet her enthusiastically and smother her in smiles and encouraging, welcoming comments about “how wonderful she looks” and how happy they are to see her and have her back. Yet, clues are dropped. Her mom asks if she may hug her: importuning if her daughter is ready to receive her affection? Curious! And her laconic, 18-year-old brother, the haphazardly funny Brody, whose response to his sister is frank and unapologetic, gives her a less than gracious hug that is cold and brief. This unsettles the atmosphere once more. We question: is that just Brody’s character or does it reflect “what happened” before Rachel left? 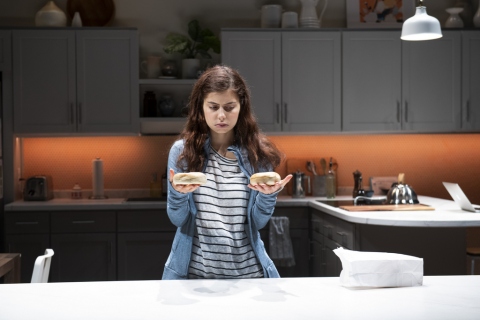 Jake Ryan Lozano’s portrayal as Brody garners laughs with his callow, humorous, teen-male demeanor, obsessed with his girlfriend and sports. (The portrayal blossoms in their quiet sister/brother time together later in the play when Lozano’s Brody allows his love and sensitivity to unfold with poignance.) Initially, Brody seems uninterested in her presence, but tips us off that her return is something he may fear when he implies he doesn’t want to introduce her to his girlfriend to scare her off and that her physical appearance the last time he saw her “was scary.”

As we watch these interactions, we synthesize the clues and the picture sharpens. Rachel has been in intense therapy that involved she be away from family. Before she left, she was in a wheelchair, too weak to walk. But now she appears physically fit. Therapy has saved her life. Back in the environment that bred her illness, can she maintain the health she has achieved or will she suffer a set back into her addiction?

The playwright gradually unfolds the mystery of what happened before that on the surface upended the loving, “normal” family. The family was never “normal;” nor was it unconditionally loving. Peter and Joan are rife with issues and problems in their relationship and in themselves;  blindness, fear and anger have prevented them from confronting themselves honestly and this has spilled onto their relationships with their children.

Feraud has drawn the matrix of illness interrelating it with Rachel, Joan and Peter primarily. Ironically, the complications of Rachel’s addiction are the manifestation of profound  issues with each of the family members. Like a festering boil which comes to a head then is burst so the infection is released, Rachel’s addiction has been burst to impact the family on a manifest level. However, for the infection to be eliminated, it must be excised at the root and that means Joan and Peter and even Brody must be excised in therapy with Rachel if she is to live with them in health. They are her addiction as well as being psychically ill themselves. However, only Rachel understands this.

For those who have suffered in similitude with Rachel’s illness, they will identify with her behaviors and immediately “get it.” And indeed, the “tell-tale” signs of how her sickness morphs her back toward unhealthy patterns explodes again and again during the weekend with Peter, Joan and Brody. During her discussion with Brody in a quiet time of night, we appreciate the serenity and honesty between the siblings, an honesty that is lacking in her relationship with her mother and father. Placed back into the family structure that is in effect a sham, Rachel and Brody huddle in their own corner of their lives. Peter’s and Joan’s marriage is crumbling with dishonesty. Brody and Rachel sense it and suffer, and will be happy to leave the festering wounds that work deep underground in the soils of their family’s lives and interrelationships.

The details of Rachel’s eating disorder are superbly portrayed. We note her family’s concern about Rachel’s eating as they sit down to a meal together all on their best behavior, playing the dutiful family members the first night. The turning point comes when Rachel speaks to her mother that evening and looks for a snack. Her mother pressures her about her career and the snack. The dutiful daughter, Rachel agrees with her mother and foregoes the snack, which she is not supposed to do according to the protocol of health set up for her by her therapists. The tiny detail and the seemingly benign interaction between mother and daughter spills controlling maternal poison that psychically infuses Rachel’s emotions and careens her back into her old self-damaging behaviors.

The next day, all unravels and the underpinnings of the problems that contributed to Rachel’s illness emerge. Back in an environment where she is the sacrifice and the target around which everyone places the blame, no one else appears to accept responsibility for their contributions in the matrix of self-destruction twining into Rachel’s addiction.  Indeed, unless the others, especially Joan, who herself is eating disordered, reflect on their own psychic maladies and seek help to correct, Rachel is doomed to fail once more if she stays at home.

This is the anatomy of an illness that Feraud incisively chronicles with emotional power and intense, accurate specificity. As each event builds on the ones that have gone before we understand the magnitude and the complexity of why people die from Rachel’s anorexia, and chronic eating disorders. Feraud unravels the tapestry with an incredible precision of detailed acts that show how Rachel slides back into a routine of bulimia, binging/purging, excessive weighing and body dysmorphia, which Joan, unconsciously, neglectfully perpetrates with the controlling pressure on Rachel to do as she suggests regarding a legal career and eating less than she should.

On the other hand, though Peter, having gone to therapy at Renley with Rachel, appears to be sympathetic and concerned, he too drops the ball regarding monitoring her care. Both parents leave her alone to fend for herself, a violation of the protocol which therapists established to make sure she will not relapse. For those “unfamiliar” with eating disorders, Feraud ‘s characterization of the struggling Rachel is one for the ages. And as Rachel weighs the bagels and takes the smallest one, stuffs down the delicious French toast then spits it out, the looming psychology of why one must watch one’s weight and not “get fat,” reveals the self-fulfilling monster that is devouring the anorexic like Rachel from inside out. 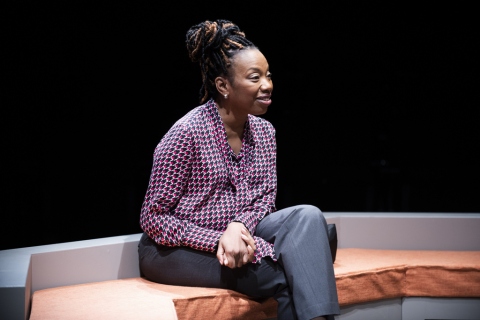 Sadly, as Feraud points out in her “Note from the playwright,” Rachel is not alone. Thirty million people suffer from an eating disorder; truth be told, the numbers are most probably much larger considering the cultural obsession of the fashion, advertising, plastic surgery and billion dollar weight loss industries which ply their guilt on women to be thin and look sleek, young and beautiful at every age.

The play is filled with the signs of nefarious eating oddities that plague not only women of all ages but men as well. Perhaps the scene that most resonates, is one enacted incredibly by Florencia Lozano’s Joan. Having been too busy to eat, Joan, who deprives herself of food to maintain her lovely body comes home ravaged with uncontrollable hunger. We watch stunned as standing by the counter, too impatient to set a place for herself at the table while she cooks a meal (Peter does the cooking; she avoids it) she crams her face with anything low calorie to stave off her “insane” cravings. The hunger she expresses is a theme and metaphor, not only of her inability to be the beautiful person she intends to be, but of her starvation of self-love borne out by her obsessive need to “be the best, prettiest, slimmest, smartest, sharpest,” all the while believing inside that she is a miserable, loathsome worm.

This and the other scenes related to eating are so authentic their reality shocks us. Indeed, the truths in this production create vital theater exacted with brilliance by the director and actors. This is a production that must be seen for its themes of how parents “lovingly” encourage their children into self-loathing translating their own self-loathing onto them, to the cultural starvation through appearance fascism that commands that all conform to one physical appearance type and self-righteously condemn anyone who does not measure up. These themes and others and the characterizations and interrelationships Feraud has painstakingly drawn to perfection. 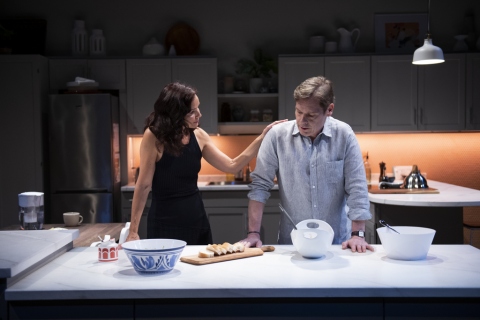 Another of the beauties of her well-crafted writing is that the themes evolve with revelation upon revelation. stacked upon each other. Then, at the end Rachel reaches a crescendo of rage that she releases in truths about her mother and father with such wisdom, it is breathtaking. All makes perfect sense; the family masks are off and Rachel returns to therapy leaving her parents standing naked in their own psychic self-loathing.

Kudos to Brittany Vasta whose functional, evocative scenic design conveys the household of perfection where imperfect individuals strive, lose, hurt and avoid each other with lies. Likewise, Nicole Slaven’s costume design, Oona Curley’s Lighting design and Ien Denio’s sound design/original compositions help to create such a memorable, indelible portrait of a family in crisis and one who is on the road to health, in spite of it.

Rinse, Repeat (precisely symbolic title for the chronic circularity of illness) has been extended until 24 of August and should be extended again, it is that superb. The play runs with no intermission at Pershing Square Signature Center. For tickets and times go to their website by CLICKING HERE.