The New York Music Festival 2019, now in its 16th year (July 8-August 4) remains the premiere musical theatre festival in the world. During the past sixteen years, thousands of artists and administrators have participated in over 400 new musicals some of which have moved to a renewed life Off Broadway. Others have toured the country and found venues elsewhere, perhaps landing back in NYC to achieve a finer calling after being tested on the road. Indeed, a very few like Next To Normal make it to Broadway audiences.

The possibilities for Buried, this year’s only musical which hails from the UK are trenchant and wide-ranging, depending upon the continued energy and fervor of its creators. The music and lyrics are by Cordelia O’Driscoll, book and lyrics by Tom Williams (he also directs) with fine  orchestrations and musical direction by Olivia Doust. Buried, a black comedy/musical/drama was twice presented at the Edinburgh Fringe Festival and it has won awards. I have missed this production these past three years I’ve attended the Edinburgh International Festival and Fringe Festival. I’m glad it found a home at NYMF 2019 so I could see its promise and hear the lyrical music. 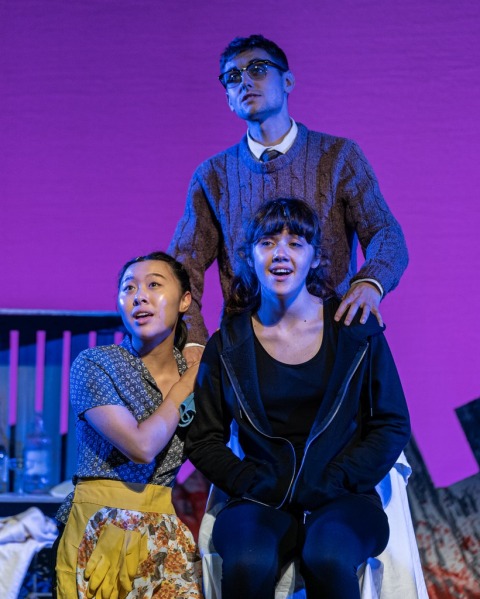 I am intrigued by the initial concept of serial killers falling in love. However, how Rose (Lindsay Manion) and Harry  (Sebastian Belli) eventually, slowly fall in love is problematic. Perhaps the stakes are not high enough, the protagonists not alluring and scintillating enough because they are too self-engrossed in their issues and pasts. Considering there is no rational justification for being a serial killer, the psychological angle could have been turned on its head regarding the protagonists in the scenes they have with each other. The digression into the comedic examination of the psychology of killing with the doctor/professor and his questioner (ensemble-Laurence Hunt and Wilf Walsworth) is witty. Indeed, the one song they sing provides the interposition of a much needed variety with the rest of the score.

However, the self-examined life of Rose and Harry as they discuss who they are and why they are with one another becomes repetitive after the initial songs.  There is a matter-of-fact irony lyrically carried by the music that reveals the thrust of their togetherness to be that they kill and are outsiders. More is needed. They are able to front to get their prey and can fit in enough to get dates. But allure and charm is wanting; the sociopath, the psychopath are hungry; they are compelled; they manipulate.

These protagonists are drawn in a halfhearted measure. If theirs could be a love at all costs which it is not, we might have been completely enthralled. And in that identification, the theme, which faltered in this production would be enhanced. Where is the revulsion that we may be attracted to the allure of another soul, no matter how damaged or self-destructive and the fact that that soul may have as its intent to lure us to kill us? 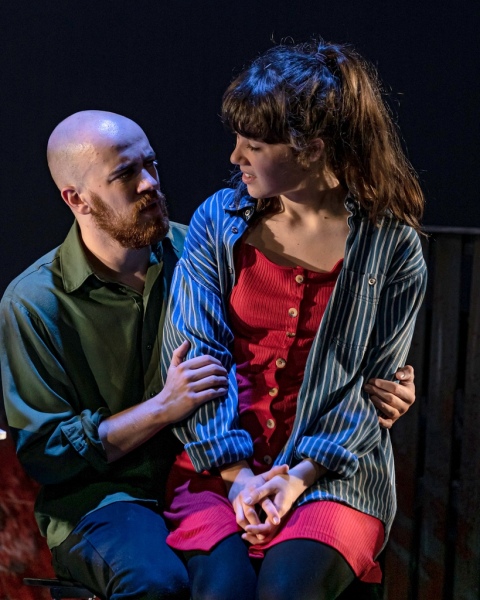 The concept of the show is original. On a level beyond its purely fantastic entertainment value (and it is entertaining without a doubt) I considered that the production should either pull back or go to its most extreme sardonic limit. Because the tension and conflict doesn’t rise to a pinnacle, it gets lost in the limbo of relationship doldrums between the two protagonists, which I drifted out of in the middle of the show. However, I came back to them at the powerful conclusion which was dynamic with the external conflict adding tension. The beginning was strong as was the ending with shining moments as Rose and Harry select their final destination.

The book could use a reworking of the arc of development to make it more powerful and in the moment. Additionally, it needs to pump up the possibilities for incredible, “kill-em” black humor to give it the grist to engage throughout. If the creators could add in new songs, perhaps with a different music style and swap out those that sometimes become lyrically redundant, the score would be various and lifted. The music is gorgeous. However, it becomes repetitive. The full appreciation of its beauty, as a result, diminishes.

All the above is couched from the perspective that the show is good enough to deserve reworking so that its inherent possibilities can be manifested and taken to additional venues and go far. The cast is excellent. Manion and Belli engaged us especially in the beginning and the ending. However fine their skills are, they could not overcome the show’s middle section which speaks more to the conflict and development of the book’s structure, not their fine performances or lustrous voices. The same may be said for the fine efforts of Hunt and Wallsworth, Niamh Finan and Rebecca Yau who performed seamlessly to Tom Williams able direction.

Buried, part of the 2019 New York Musical Festival, should be seen because it is an entertainment that is fun and delights with humor.  It is a show with tremendous potential. Kudos to all involved!

Buried runs with no intermission from July 9-14 at The Alice Griffin Jewel Box Theatre at The Pershing Square Signature Center, 480 West 42nd Street.  For tickets and times CLICK HERE.