‘My Life on a Diet’ Starring Renée Taylor, a Laugh Fest You Don’t Want to Miss

Renée Taylor in ‘My Life on a Diet.’ directed by Joe Bologna, Theatre at St. Clement’s, (Jeremy Daniel)

Every woman who has ever gone on a diet should either run to the Theatre at St. Clement’s to see My Life on a Diet or read Renée Taylor’s titular memoir. Taylor and Joseph Bologna, her husband of 52 years (now deceased), wrote her one-woman show, and as live performances go Taylor’s is just sumptuous.

Bologna, who directed the show, and Taylor have been a brilliant comedy writing and acting duo for decades, garnering Emmy Awards, a Writer’s Guild Award and nominations, and Academy Award nominations. Both have prodigious credits spanning TV, film, and Broadway. Together they collaborated on 22 plays, four films, and nine TV movies and series. Taylor acted with Bologna in plays they wrote for Broadway and Off Broadway, some later adapted for film, such as Lovers and Other Strangers, which they also starred in.

Taylor’s most recent exploits have been in recurring TV roles in How I met Your Mother, Bob’s Burgers, and Happily Divorced. Renowned for her portrayal of Sylvia Fine in The Nanny with Fran Drescher, Taylor developed comedic bits throughout based on her own eating binges. Overeating and dieting have been a Renée Taylor obsession her entire life. Thankfully, her story of dieting woe and skinny happiness has blossomed into this uplifting and marvelous show at St. Clement’s.

Indeed, with every well-timed joke, the production shimmers with riotous, rollicking fun. From beginning to end, the story scintillates with irony. From this historical reminiscence of Taylor’s childhood and adult years in New York City, Miami, and Hollywood, we glean an indelible portrait of the celebrity frenzy of dieting and weight loss. Enhanced and elucidated with personal archival black-and-white photos, film clips, diets, anecdotes, and fabulous humor, the story of her life through the decades makes us empathize as we laugh at her deadpan delivery. With every line and precept of weight loss, Bologna and Taylor authenticate Taylor’s show-business life as she struggles and fails to maintain “weight” even to this day. 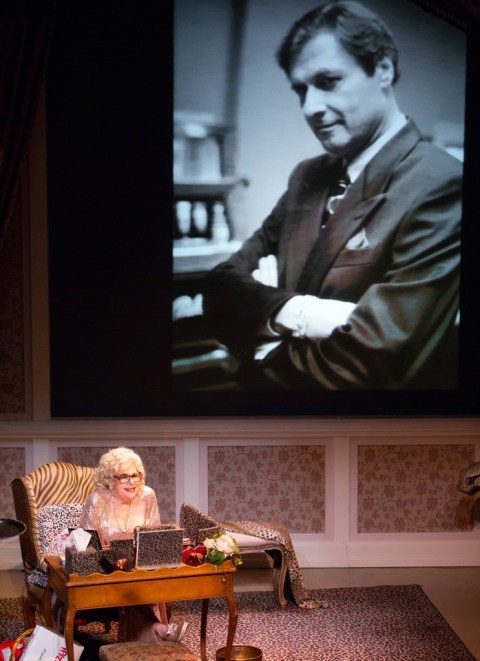 Renée Taylor in ‘My Life on a Diet,’ directed by Joe Bologna, Theatre at St. Clement’s (Jeremy Daniel)

Not only does the writing sparkle and effervesce, Taylor’s impeccable delivery and beautifully paced riffs leave no time for you to breathe. Your sides will be splitting and you’ll double over with joyful hysteria. For Taylor absolutely crushes it as she obsesses about appearance and historical trending diets (more than 25 including the Master Cleanse), with zaniness and LMAO humor.

The first examples she lists include individuals who died while on their own self-created and -touted diets. One even committed suicide. You may recognize the names. However, messages and themes eventually sneak through the crashing laughter. The fascism of slimness and appearance which Hollywood once embraced with fury can be wild, if not fatal.

Renée Taylor in ‘My Life on a Diet,’ directed by Joe Bologna, Theatre at St. Clement’s ( Jeremy Daniel)

Though Taylor doesn’t reference Judy Garland, one may recall Garland’s drug addictions that began with diet doctors’ heavy prescriptions. Thus, when Taylor discusses weight loss via a diet of expensive Cristal champagne, and her addiction to amphetamines, we realize her journey was heading toward a dangerous cliff. Thanks to an intriguing, no-nonsense female doctor, and to meeting Bologna, Taylor’s life took an upswing into love and away from the dieting morass. One may arrive at emotional health and happiness with generous dollops of love, humility and humor. And so what if there are always a few pounds to shed? Wellbeing becomes paramount; that, and the ability not to take one’s obsessions too seriously.

One does not have to be overweight or diet-challenged to appreciate Taylor’s history of Hollywood stars and their diet manias. Even anorexics will enjoy her beautifully delivered jokes. For they highlight Taylor’s other obsessions: becoming and being “star-bright famous,” and meeting “star icons.” Notably, Taylor formed relationships with Orson Welles and Lenny Bruce. She became friends with Grace Kelly and Barbra Streisand on their way to stardom. When she discusses her poignant and close relationship with Marilyn Monroe, whom she met at the Actor’s Studio where both studied with Lee Strasberg, she breaks your heart.

In each instance Taylor lists food habits amidst delicious tidbits of humor. For example, Joan Crawford neglected to eat the bread part of raisin bread, eating only the raisins. Marilyn Monroe’s grape diet didn’t work for Taylor. On Lou Costello’s diet, the first diet Taylor went on (at age 11), she began to look like Costello.

Renée Taylor in ‘My Life on a Diet,’ directed by Joe Bologna, Theatre at St. Clement’s (Jeremy Daniel)

As she attempted to combat the eternal problem of all dieters, “cheating,” she found that no diet worked, not even the diet plans given her by doctors her mom took her to. Then came a turning point in her “dieting life.” No one forced her to go on a diet; she had made that decision herself prompted by a first love. “Applause.” And her yo-yo dieting journey began. Priceless! I identify completely.

Regardless of whether one is young or old, male or female, overweight, buff, sylph-like, or curvy, Taylor’s war on fat rings true for us today. Indeed, for young folks in elementary school through high school and beyond, weight and identity is a critical issue, even for males. Fat shaming can be a social media bullying problem. Taylor reveals that humor, wit and irony can slay bullying insults at their roots.

My Life on a Diet is at Theatre at St. Clement’s (423 West 46th St. between 9th and 10th). Visit the website for tickets or call Telecharge, 212-239-6200. But hurry! The show runs until 19 August. Update: the show was extended a number of times. It should tour or come back. So many women struggle with losing even one pound, they will love Renée Taylor’s hysterical perspective.