We all are enamored of the astronomer/physicist who defied the Catholic church for a season, and though it was heresy taught that the earth was not the center of the solar system/universe, but that our sun was. F. Murray Abraham famed Academy Award winner for Amadeus and acclaimed Shylock in last year’s Classic Stage Company’s Merchant of Venice must have been enamored of Galileo as well because he plays the man with empathy and brilliance.

It is interesting that the director Brian Kulick and the company have chosen the Charles Laughton, Bertol Brecht collaborative translation of Brecht’s play Galileo. The director states that it was chosen in part because in 1947 when the play was premiered in Hollywood and had a brief later run on Broadway, this translation was meaningful in light of the nuclear age ushered in upon the world stage after Fat Man and Little Boy were dropped on Hiroshima and Nagasaki. The inevitable interplay on science’s impact on the culture was something that Brecht wrote as a concern of Galileo, how men would use the truth of science. It is a theme that artists and writers like Ray Bradbury and other science fiction writers and filmmakers have taken up again and again, even in works like Alien and Kubrick’s 2001  A Space Odyssey. 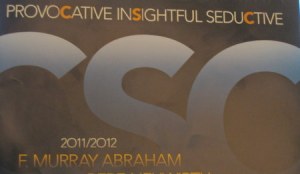 But Brecht’s version playing at the Classic Stage Company which has none of Brecht’s later additions about Galileo and the church resonates for us in its themes about the inflexibility of changing with the nature of truth, and the nature of truth itself being shaped by culture, history and expediency. Galileo’s life is picked up at the point when he is living with his daughter and is tutoring wealthy sons of land owners. Brecht clearly makes the point that one of Galileo’s foibles was his flesh, his enjoying life and eating and wine. And of course, this is the hook later in the play providing the rationale why Galileo was not the martyr that many “heretics” were at the time when he ran afoul of the Inquisition in teaching his truths and proofs about the motion of the spheres, teachings which some of the cardinals, themselves, acknowledged as accurate.

No, Galileo was not a martyr. He caved. And F. Murray Abraham imbues this fleshly hero with an empathy we can all understand. Would we not do the same as he? Who of us would perish for some scribblings that may or may not be used to enhance mankind at some future date. No. Galileo will recant and not burn. He enjoys his wine. His flesh is weak and if the truth burns instead of him? Then, at least he will be able to get to his next meal and glass of wine, enjoying its taste.

But the price he pays brings a skein of bitterness, rejection of his students (interesting that they do not offer to burn with him for receiving the blasphemous teachings) the daily remembrance of his cowardice for his papers have been confiscated, and he must cope with the permanent guest in his house who guards him from writing anything down. So our genius is imprisoned in his home and his mind, unable to further any of his discoveries.

I do not advocate spoilers. So you won’t read what happens here.  Get a copy of the play. Brecht is a brilliant playwright, though this might not be his most superlative play. (Mother Courage and Her Children is better.) Don’t count on seeing this version. If you have connections, perhaps you will be able to get a ticket, though it will be difficult unless you know the director or F. Murray Abraham. The performance is completely sold out.

I would have loved to go again, but I’ll just have to remember, rereading this review, how splendid the supporting cast was and how human and alive F. Murray Abraham’s performance was. The circular stage, a sphere, naturally and the globes of the solar system hanging from the ceiling were an effective backdrop to the action of man at the center of the universe. It was only until Galileo’s discourses were noted far and wide that man was no longer front and center and the Age of Enlightenment propelled the sun to the center and knowledge, science and a different kind of truth began spinning outward farther and farther into space and time.

I couldn’t recommend this production enough. I do think that at some point other versions of Brecht’s Galileo will be picked up by other prodigious actors, who like a challenge and enjoy the thought that they can step into the cloak and mien of one of the most illustrious, brilliant and flawed  of scientists, making us actually happy that he did not, like so many others fall into the loathsome clutches of the nefarious Inquisition.

By the way, it is interesting to note that Galileo in all his science believes in God and is God’s man. Only the truly brilliant, the ineffably brilliant are able to reconcile science and God, bringing them together in complement, not stretching them from one end of the universe to the other (That is a joke; the universe has no end…and maybe no beginning, since no one was around to observe the Big Bang. It’s a theory.)

To that effect and because I was inspired by the play and F. Murray Abraham’s performance, I did write a sonnet to celebrate.

You can find it here. Enjoy!