← What is Slow Wine? Come to the Slow Wine Tasting in NYC on January 28th to Find Out!
IL Buco Alimentari & Vineria. A Great Place to Host the “European Winery of the Year 2012.” →

What does it take to be an award winning winery? Centuries. What contributes? Various factors, the terroir, changes in the wine making process, the winery’s sustainability and innovations, possible climate changes based on land changes and the regulations, protection and veneration of the social culture, government and owners/keepers of the harvest, their industry and efforts.  Italy is an ancient land of wine making, dating from before the Romans. The social culture supported the grape harvests and enjoyed drinking wine daily; it was certainly better than water.

In current times, the 1700s, the growing of grapes and wine making was suited to Umbria, the “green heart of Italy” and Montefalco, where documents of the time noted that “fine and delicate wines were produced there in ‘beautiful and good’ vineyards.” So much was this the case that municipal sanctions were strengthened to maintain and sustain the culture of thriving, glorious vineyards and sumptuous wines.  If you hampered a winery in its noble and sacred endeavors, you were in big trouble. In 1622 Cardinal Boncompagni, the Pontifical delegate in Perugia, threatened “capital punishment for anyone found cutting down grape vines.” Cutting down a plant was worthy of death? Such was the symbolism, of grape vines and the vitality of wine to the culture and the church.

The Arnaldo-Caprai vineyards in Montefalco

With this dictum in place, Montefalco was assured of continued abundant grape harvests and in good seasons and bad, productive, determined wineries. In the next two centuries, the place was considered  “at the summit of the State for its wine production.”  though even then, the cultivation of Sagrantino grapes, a varietal indigenous to the region, was destined to produce sparely. However, difficult their productivity, the Sagrantino vines were nevertheless preserved in ancient monasteries by wine-making monks.

Interest in the Sagrantino grape waned after World War II and trends had changed by the 1960s. Perhaps because of its scarce productivity, the Sagrantino grape nearly disappeared from Umbrian vineyards. It was the dedication of a few courageous wine producers and perhaps their romantic imaginations and interest in the Sagrantino as an indigenous varietal that the D.O.C. label in 1979 and D.O.C.G  label in 1992 officially sealed that the important tradition of these vines would continue. After this, the few Sagrantino vines still flourishing within the city walls of Montefalco were labeled and classified. The history of the grape had been preserved, and with research, it was assessed that some vines growing in the monasteries of St. Claire and St. Leonard dated between 1700 and 1800. Certainly, when the wine producers encouraged the sustainability of the Sagrantino vines, they were also preserving the sacred nature and lineage of the wine’s association. 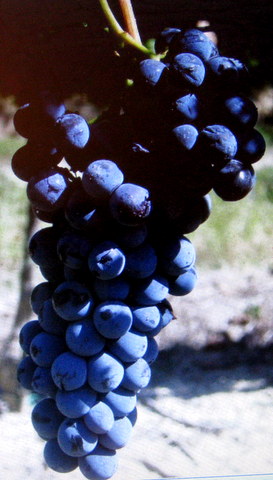 It was in 1988 that Marco Caprai, son of Arnaldo Caprai began managing the Arnoldo-Caprai winery that had been producing unique, top quality, Umbrian wines. Because of the father’s and son’s passion and rich understanding of the local varietals, and Marco Caprai’s desire to expand the work and develop the winery and the indigenous grape, the Sagrantino, Marco Caprai partnered with the University of Milan. His goal was to research the neglected native Umbrian Sagrantino varietal.

With the collaboration and support of top local winemakers and sustained effort, Caprai and colleagues succeeded in transforming a relatively unknown indigenous grape to one that is world renown.  Because of the connection to his ancestry, with his characteristic enthusiastic fervor, Capai expanded the winery to over 375 acres of vineyards. One of the keys to his great success was and is his selection of a first-rate team. The team worked and continue to work alongside him in both wine production and company management. Together, their efforts contributed to making The Arnaldo-Caprai winery the “acknowledged leader in the production of top quality Sagrantino di Montefalco, the wine produced exclusively from the Sagrantino grape.”

For his determination in working to pioneer and produce excellent wines of unique character and depth, Marco Caprai and the Arnaldo-Caprai Winery have garnered multiple awards and global recognition. A few examples include Winery of the Year – Gambero Rosso Slow Food 2006, and Best Winery of 2011 from the Italian Sommelier Association (AIS). Their Sagrantino di Montefalco has won awards up to the present.

Not satisfied resting on these laurels developing the Sagrantino, to global renown, currently Marco continues to assist in the development and reclassification of the Montefalco territory suitable for vineyards.  He works in collaboration with the La Strada del Sagrantino Project, the prime force in engineering the marketing of the territory. 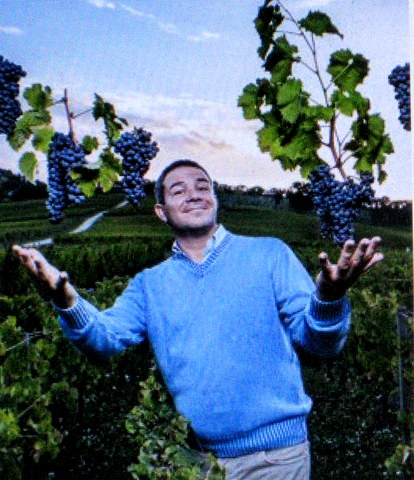 The irrepressible Marco Caprai. What grapes are those?
Photo courtesy of Wine Enthusiast Magazine, from the article by Monica Larner at the announcement of the Arnaldo-Caprai “European Winery of the Year Award.” 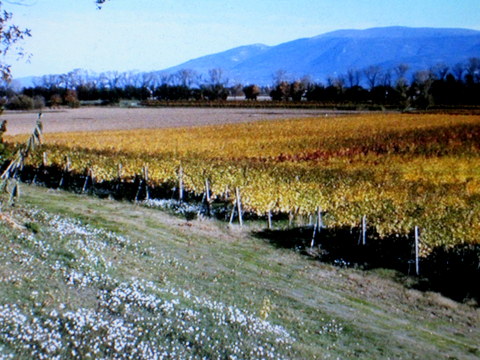 Arnaldo-Caprai vineyards in the fall.

This year, the Arnaldo-Caprai Winery has been recognized by Wine Enthusiast Magazine, which is an industry leading publication founded in 1988 to bring consumers information about the world of wine through its reviews. The periodical, which has grown to become the world’s largest and most respected magazine devoted to wine and spirits, gives out annual “Wine Star Awards.” The magazine’s editors honor the year’s finest wineries and highlight the influential personalities who have contributed greatly to the world of wine, celebrating outstanding achievement both within that given year and over time. 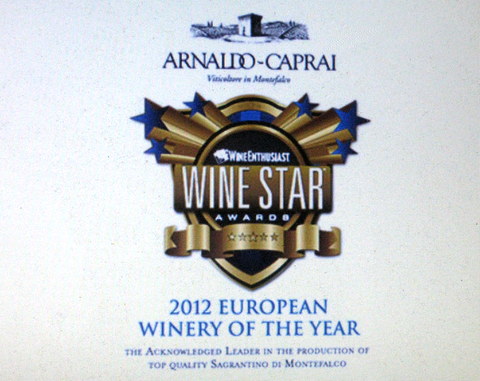 Upon receiving notification of the award, Caprai said, “The Sagrantino grape has been my lifelong passion. I have dedicated my life to making Sagrantino a grape known worldwide and this award is a terrific testament to that effort. We’re honored to be chosen for such an important international award and to be in the company of some of the best wineries and wine personalities in the world.”

Marco and the Arnaldo-Capri Winery are now the toast of the town in recognition of being awarded the Wine Enthusiast‘s European Winery of 2012. On January 22, 2013, there was a Marco Caprai Producer Dinner at L’Artusi. Attendees  enjoyed a delectable five course dinner with wine pairings. Marco is also being celebrated for his achievements by Roberto Paris and Il Buco Alimentari & Vineria in a private event the following week.

Can things get better than this? From the bit I have researched about this diligent, resourceful, innovative entrepreneur and fine wine artist, Marco Caprai, there are even better things on the horizon.

← What is Slow Wine? Come to the Slow Wine Tasting in NYC on January 28th to Find Out!
IL Buco Alimentari & Vineria. A Great Place to Host the “European Winery of the Year 2012.” →