Writers! Regardless of Where You Stand in the Publishing Game, Enhance Your Social Media Presence.

A Spiegelman fan,I purchased this copy at a used bookstore.

Brilliant best selling graphic artist and Pulitzer prizewinner Art Spiegelman of Maus I and Maus II fame struggled to get his work out there in the early 1970s. It was a process and there was even rejection of his incredible, iconic work. (Words cannot describe the graphic artistry and meaning of what he has done with Maus I and Maus II. You just have to check it out for yourself or not.) When he was attempting to get his book Breakdowns  published (before he created Maus I) it didn’t go swimmingly. Decades later, after his many awards, global recognition and other publications, his editor at Pantheon was all for re-issuing Breakdowns and this time, Spiegelman was surprised and hesitant. But things had changed by 2007. You mean publishing and the cultu1re had galactically shifted from the days that Art Spiegelman was first establishing his career? Duh!

In those days, for Spiegelman, getting published was not unimportant. To many today, it is golden. It is the dream of established writers who may have faced writer’s block after years of success. It is the dream of those who have fallen off the charts and out of the hearts of former readers. It is the dream of the published whose first, second and third books have middling sales that  tapered to .001% so that literary agents and editors won’t go near them. (Low percentages? Nil profit margins? Are you insane? How can the media  CEOs sustain tremendous salaries and bonuses with such schlocky sales numbers?) It is the dream of the working writer who has written and published one book and is working on another in the hope of changing publishers/ agents and getting a better deal, though the first book sales were abysmal. The variables of situation are endless, unless of course, one is a hot name with an extensive platform, i.e. Bill O’Reilly (in which case the greatness of the work is immaterial, as long as there is name recognition and a ready mega platform).

The irony has been that for the last century, concepts and particular literati who have been favored by elites, the wealthy or politicos have been highly publicized. This creates an inherent censorship. The gatekeepers, the literary agents, the large presses have kept it that way to fuel ideas that elitists wanted the public to believe and be bound in by. So traditional media has worked in concert with the very wealthy. (Perhaps it is why Spiegelman was rejected for publication until he found an intelligent, prescient SMALL publisher who took a chance on him.) In many instances the middle class and general public’s reading tastes have been tailored to what elites have deemed, “great,” though their standards are merely opinions and predominately skewed to their agendas. Their concepts of great craft, writing and artistry often beggar the imagination. 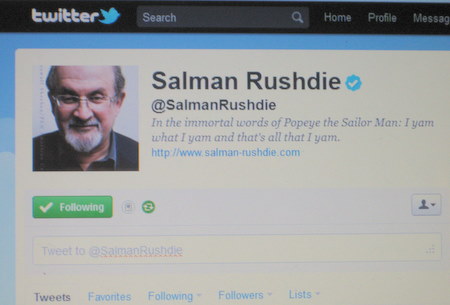 Salman Rushdie tweets with his fans on Twitter and actually did battle last year with Facebook, winning with his great humor, irony and wit. Social media is one of the best ways to connect and keep in touch with your readers.

Needless to say, European publishers, more intellectual, knowledgeable in breadth and scope, courageous and less censoring, have allowed titles in that NEVER WOULD HAVE BEEN ACCEPTED IN THE US. And yet, we think we are a free and open democracy?  (We are told that by traditional media hirelings though many medical books and controversial political content find publishing friends overseas or in Canada.) Well…traditional publishing has relied on TV to gather its stable of often un-meritorious but profitable properties.  Writers, unfortunately, have been at the mercy of these “experts” in the field who often consider the art and craft of a work last, and consider the saleability first.

Apple was one of the companies sued by the DOJ for price collusion.

This former “state of the art” for the industrial media complex has been upended by Google. It has been overturned by Amazon, undercut by Facebook and thwarted by Twitter and other social media platforms and growing spheres like Storylane.  How? Subtly and not so surreptitiously. When traditional media realized it had lost its edge and destroyed the bee hives producing their honey, their fear and greed and inability to ADAPT or wrap their brains around what was happening spurred them into old paradigm interventions that worked before: lobbying and price collusion.

Mistake.  They’ve been held accountable and have been sued by the DOJ and a few have had to settle while others collude with the government for the best deal which may not be forthcoming since their profitability is much lower than Google’s and Amazon’s. You see traditional media became so comfy with their century long oligolopoly that they were caught up short without a chamber pot when Amazon undersold them. That’s all they could come up with to compete? While they were riding out the waves of the past, their navigation misdirected by the old paradigm, the innovators, like a huge roller, a mammoth tidal wave, a mega tsunami, capsized their hopes and dreams of profits. Now, they are paddling slowly while growing social media networks and companies like Google continue their innovations, investing money in R & D to create better product and to entice readers, writers and developers to improve.

Bottom line? Google is swamping the media that was!  I will not refer to the traditional publishers by name. Unless they begin to accept mid-list and beginning writers, offering them credible crumbs, the writing community will eschew them completely in favor of working with e-publishers, small publishers, Createspace, et. al, and those in the online publishing paradigm. I give these censoring publishers who will have to spend more and more on costly promotions and PR campaigns less than 20 years. Unless they begin to innovate to create the “next best thing,” or unless they merge with Amazon or Google (Why would those companies want to merge with inefficient, ineffective, archaic and intractable platforms?) they will have disappeared, become a ghost memory, a ridiculous faux nightmares of elitism from which we have awakened. What was the name of that book seller that went bankrupt because its innovations were too little too late? Innovate or perish. Big name publishers are slowly writhing in the mud as their hand maidens, the agents, the PR personnel, the editors struggle, sucked downward with them, sinking further into the shifting, miry clay soon to be swallowed up in a sinkhole of their own making.

The diminishing present trend is that,unless you are President Obama or a politico or a faux or worthy celebrity, a salable commodity, a publishing company will not market you. You have to market yourself. Even if you are President Obama, you have to market yourself, appearing on old media, TV, etc. Wasn’t it Michelle Obama I saw ripping open the envelope for the Best Picture Oscar last night, via a feed from the White House? Folks, the President is savvy enough to have his social media hordes and teams busy marketing him online. It’s why the Republicans have been doing unmentionables in the dark. They can’t get into the light of Twitter/ Facebook, et. al. and sound rational.

Kristen Lamb, author, blogger and a member of the online writing community who inspires and nudges writers to get on with the craft and be persistent in achieving their goals.

So, writers, if it’s good enough for the Prez, it should be good enough for you. Kristen Lamb, social media maven and author, in a recent blog post discussed the hard work it takes to position yourself on social media platforms to establish a working, interactive community from which you can promote and sell your books. If you think it will take too much time, then hire a team to help you. Using hashtags, and signings and promotions and launches, you will be able to promote yourself on social media and continue to do so, long after a traditional publishing company has left you to ROT.

Nina Amir is a motivational coach who helps writers and non writers achieve their goals and live inspired lives.

How do you do this if you have been out of the loop for some time and find Facebook, Twitter, Tumblr, Youtube and Reddit loathsome? GET OVER YOURSELF! SNAP OUT OF IT! Swallow, take a deep breath and sign on for social media classes online. If you are a woman writer, then check into WOW  Women on Writing. If you prefer live and hands on, there are many Continuing Ed. courses at various universities or colleges near you. Hopefully, you are not in this dire condition.

To help yourself and your writing career regardless of where you are…pick up the bullet at your current situation:

This is the beginning of a beautiful relationship with your online writing community and your team of writing friends who are intelligent, creative wordsmiths. You will keep many; you will lose many, but the journey is amazing, and eventually what was the hard work, when you look back after a year of doing this, will not appear to be so arduous after all. 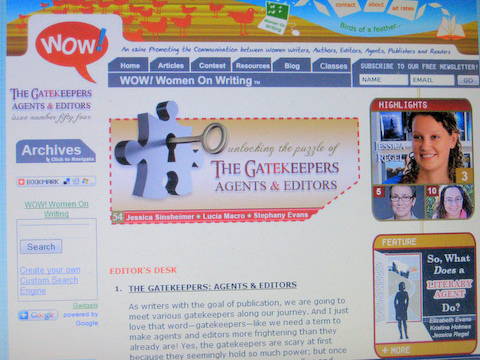 The following 2 sources might be helpful for those who are beginning, or those who have taken a hiatus and need to get back into it especially if you feel overwhelmed. I apologize for not including many more, but these should whet your appetite and they are easy.

Online writing source with classes: WOW Women on Writing.  (Men can take these classes as well. They are not maternalistic.) I took classes with WOW and found them to be what I needed. I also had to put in the time to learn by trial and error. I have writing friends who refuse to do this and their many publications languish, but they are trying to use other venues to get going. (traditional media venues)

Helpful Books:  How to Blog a Book  by Nina Amir

We are Not Alone: The Writer’s Guide to Social Media by Kristen Lamb

Your successful publishing career can take years, but so can publishing via the traditional way, which may never come to pass as the industry is reeling in a downward spiral toward doom. I have a friend who self-published because he said he was getting old and he wanted to see his books in print. That was his dream. What is yours? Are you using your social media presence to achieve it?