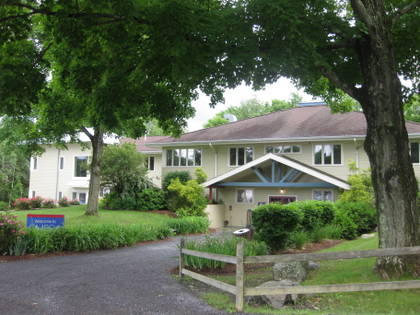 Omega Institute in Rhinebeck, New York is an amazing center for wellness, holistic studies and  sustainable living programs and practices. Omega’s beautiful environs and campus must be experienced to be believed. The institute offers workshops, conferences, online learning, retreats and getaways and  hosts programs in New York City and Costa Rica. Omega encompasses the world; it is a global community that “awakens the best in the human spirit and cultivates the extraordinary potential” that is in all of us.

My first visit to Omega was with a friend, Rosary O’Neill, who is teaching a scriptwriting workshop July 7-12, 2013. With her I had the opportunity to tour the campus and discover more about Omega’s mission and its programs. After my brief time there, I realized that Omega represents everything I embrace and have endorsed for a good part of my life, starting with health and wellness. I especially appreciate their forward momentum in implementing ways to support and integrate a sustainable lifestyle that replenishes, renews and regenerates a culture that is in harmony with the environment.

One of the opportunities open to me as I walked through the gardens and followed pathways over the stream (after a delicious organic cappuccino in the cafe) was to see Brian Schorn’s exhibit at the Ram Dass Library. Brian was one of the individuals Rosary and I met in the cafe and after sharing with us his journey of how he arrived at Omega, I was convinced that this accomplished Renaissance man who has engaged his senses in all realms of the fine arts and media is perfecting his life’s work, and that indeed, his life path is an artistic work unfolding.

To be able to let ourselves release into freedom is one of the greatest achievements we can attain as human beings. Often intense personal restrictions (after psychological cleansing) prevent us from “going over the cliff.” and finding ourselves. Over the cliff is not the great fall to fear. It is the free space allowing us to fly. Sharing time with Brian, I could easily see that he was soaring and I was gobsmacked at his courage to break out from the entangling personal labyrinths, to move to the edge and then leap.

And after the leap? New directions for his art some of which is currently being exhibited at Omega’s Ram Dass Library. Spurred by opportunities to live in the mountains of Colorado and Vermont, Schorn focused on his connection to the natural world. In the seclusion and beauty of various terrains, he could explore and delve into environmental art, deep ecology, natural history and outdoor adventure.  Previous artist residencies included Ox-Bow in Saugatuck, MI and I-Park Artists Enclave in East Haddam, CT. In a ‘fusion complement’ his experiences with natural environments directly informed a new body of work: audio field recordings, electronic music composition, outdoor performance, calligraphy, sculpture with natural materials, photography and computer-generated imaging.

Brian’s exhibit at the Ram Dass Library is entitled “Lost and Found.” His work includes sculpture, assemblages and calligraphy. To whet your appetite, a few examples are below.

Brian Schorn’s exhibition opened Memorial Day to an enthusiastic reception. The selection of works and their presentation offer Brian’s unique vision and integrated approach employing a dichotomy of natural elements in a juxtaposition of artistic mediums. His works will be exhibited throughout the summer and into September. If you are in the area, drop by the library after availing yourself of a look see at Omega Institute’s Visitor’s Center to check out this phenomenal venue tucked away in the Hudson River Valley. You will thank yourself that you did.