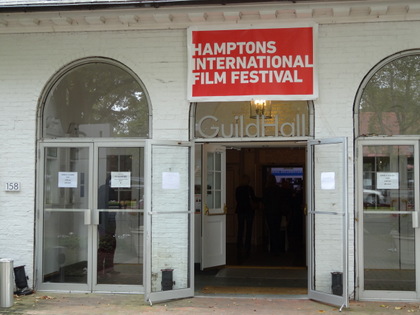 Guild Hall, one of the screening and red carpet venues.

The 21st year of the Hamptons International Film Festival has seen its share of great feature films, documentaries, shorts, world cinema offerings, and UK favorites. This year’s festival was highlighted by visits from celebrities like Ralph Fiennes, Bruce Dern, Will Forte, David Duchovny, Hope Davis, Timothy Hutton, Ralph Macchio, Helena Bonham Carter, Bryan Greenberg, and actors to watch like Dane Dehaan. These individuals graciously offered their time with the audience in Q & As and helped to support their films some of which were either World Premiers or East Coast Premiers. 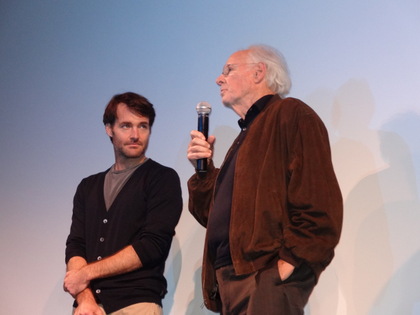 Will Forte and Bruce Dern in the Q & A for Nebraska. Both were very generous with their time.

By Monday, the last day of the festival which ran from Thursday October 10th through October 14th, audience ballots were calculated, the choices finalized. The Hamptons International Film Festival audience win fofor Narrative went to the UK and the US brought in the Documentary wins, both the full-length and the short which both had their premiers at the festival. 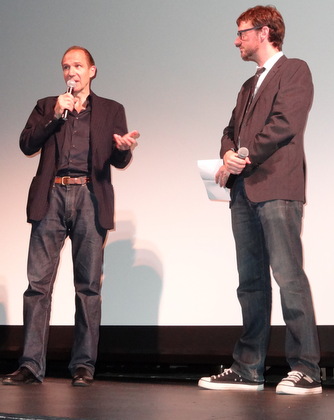 Ralph Fiennes answering a question about close-ups in his film The Invisible Woman. With Artistic Director of the HIFF David Nugent.

Philomena won the Audience Narrative Award. Tickets were difficult to come by because of the star, the beloved Judi Dench, and its haunting subject (unwed mothers in Catholic Ireland) which has been touched upon in films like the Magdalene Sisters. In the 1950s Ireland’s Catholic Church held sway in maintaining paternalism, placing the worst of the double standards of male chauvinism at the forefront of the cultural ethos. Philomena Lee (portrayed with poignant, touching humor by Dame Judi Dench) was a victim of repression when Church officials forced her to put up her child for adoption because the man bed her but didn’t wed her. Stigmatized by the community of good men and women and trapped by societal norms, Philomena gave up her son for adoption despite her best intentions to keep him. Years later, Philomena attempts to right her wrong. She goes on a journey to find her son with the help of a BBC reporter and their travels are endearing and fun.  Stephen Frears directed the film whose screenplay is adapted from the book The Lost Child of Philomena Lee by Martin Sixsmith.

Desert Runners, having its East Coast Premiere at the festival won the Audience Award for Documentary. The film chronicles individuals who sign up for and run the entire Desert Ultramarathon series which must be done in one year. This is a series where challengers run 150-mile ultra-marathons through four of the world’s most brutal and dangerous deserts: the Atacama Desert in Chile, the Gobi Desert in China, the Sahara in Egypt, and after all that heat, the desert of ice in Antarctica. How do these individuals deal with hurdles, success and failure as they run the extremes of life’s call to their souls? How do they canvass and balance their internal peaks and valleys in the beautiful and deadly environments that force their physical, mental and emotional range to their limit? It is a well told tale which shows individuals who have a need to go up against nature’s extremes for the honor of a race well run.

One Last Hug (…and a few smooches) Three Days at Grief Camp directed by Oscar nominee Irene Taylor Brodsky won the Audience Award for Short Documentary. How does one grieve the loss of a loved one? Internalize it, shut down, and move on? Cry? How does a child grieve the loss of a mother, a father, a brother, a sister? This documentary shows how. With an objective and non maudlin, overly sentimental approach, which is even more touching and powerful, the viewer immediately connects with the children’s stories as they tell who died in their families. The documentary short moves in real time with the guides who help the kids through activities designed to safely allow them to express the multiple emotions that come when confronting a loved one’s material absence and final abandonment. As the kids express their feelings, they are comforted and learn to comfort one another to relieve their pain. It is a powerful reminder that with loss there is also the comfort of others and another type of love found.

THIS ARTICLE FIRST APPEARED ON BLOGCRITICS AT THE LINK BELOW