In continuing my discussion with Christian Primeau, designer of NYBG Orchid Show, Orchidelirium, Christian discussed details about orchids and specific information about the show’s design and his background. 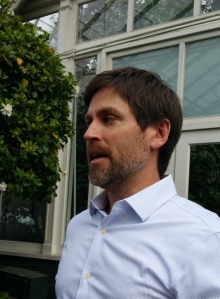 Christian Primeau designed Orchidelirium and overseas the tropical/subtropical plant collections at the NYBG.

How did you know which orchids you were going to select for the show? There are a lot of different orchids that I’ve never seen before.

That was our main focus with this show as opposed to many others. It’s always a spectacle. We wanted to really represent the scope of the orchid family as a show theme. The Victorians were passionate about finding super rare orchids. We wanted to show what that orchid geek’s greenhouse would look like and what a really passionate orchid collector’s greenhouse would look like. So we have the bulk orchids. The beauty in bulk is there to show people that range of how different the orchids can be. Their diversity is fantastic. A lot of people are familiar with the Paphiopedilum (lady slipper orchids). You can buy them at the grocery store. But we’re hoping to show people orchids and plants that they may not have seen before. It was easy too because we’re nerds and we might pick things that we might want in our greenhouse as well.

Did you find a lot of orchids that you had never seen before?

I was not familiar with a lot of the orchids. Marc is the orchid fanatic. He’s the curator. So he would come to me and say look at this and I would say that’s, fantastic, we have to have that in the show. So I did lean on Marc a lot for his expertise. And that was fun for me, too, because I learned a lot as we went along, too. It was great.

Which one of the smaller touches in the show did you appreciate?

Well, the vignettes. When I drew the actual design sketches, I knew the things that I wanted the most were the Nepenthes, which is not an orchid it’s a tropical pitcher plant. In my mind when I drew the sketches I had these tropical pitcher plants incorporated in with the orchids.. It’s ironic. People from year to year will target plants that are not orchids and say, “Look at those, that’s beautiful.” And we explain, “Yeah it’s not an orchid but it is beautiful.”So I wanted those Nepenthes. They grow on little pieces of tree fern that we have and that I’ve incorporated to grow over rocks. I think they go beautifully with the orchids. They give a little added touch and a little change in texture. So I do like those. 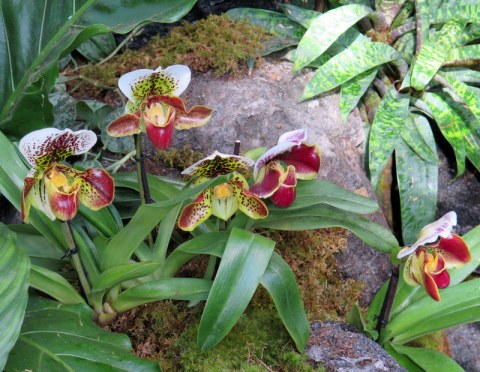 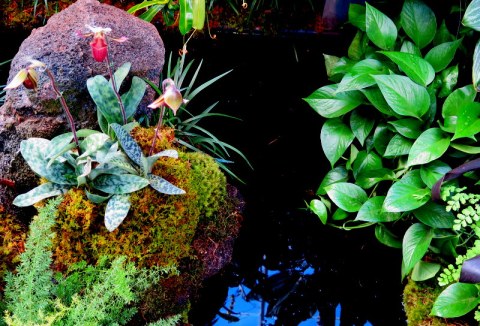 In my head I wanted small. We never really showcased paths, the Paphiopedilum. I mean we have small pots, and we have little groups, but I wanted to show how they might grow. I incorporated flat rocks and put paths (lady slippers) on them and a bit of moss, something very simple but might make people stop and look and see that it is beautiful in its simplicity and appreciate those on their own. That way they wouldn’t get lost. But if you notice in front in the pool the little rocks that were put there to show people that vignette. That concept was mine, too. Given the scope of the project they are fairly inconsequential but I just wanted to incorporate them.

I am amazed at what my staff was able to do and I feel uncomfortable taking any credit. They are my guys. I can draw a picture, but without them there is no way this is getting done. There are 8 staff members and without them, no way. To their credit they stayed happy and positive. It was actually a pleasure. We were all exhausted but when they stepped back and looked and saw the little things that they had done and how they contributed to the entire show, I think they were really proud and I was proud of them. It was nice for me to see, even more so, I think, viewing the vignettes than the totality of it. It was great that all of my staff was represented. They’re passionate. They’re plant people. That’s what it’s all about and it was fun for me to see them work.

How many orchids do you have in your collection?

The NYBG? The official line is thousands. 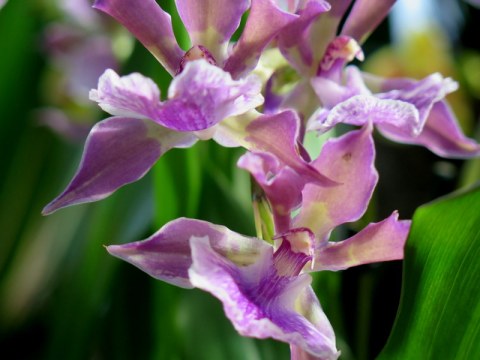 What about in your personal collection? A few?

I have a select few but I’m more of a succulent person. It’s funny because they asked me to design the Orchid Show. I like cacti and succulents and my area of expertise is actually Madagascan aloes. But I do have some paphs (Paphiopedilum). I have a soft spot in my heart for the paphs, lady slipper orchids. In my personal collection there are six or seven of those but I do have a lot of the other plants that we show with them, the Epiphytic Cacti, Nepenthes (pitcher plants), the weird things. The weirder it is, the more I like it. 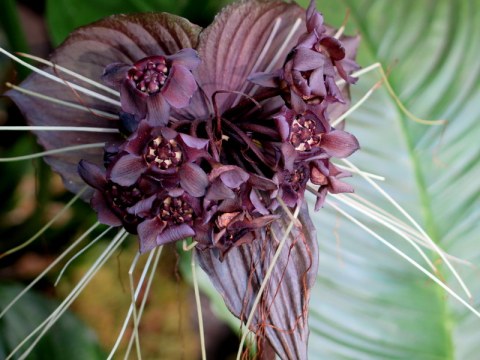 You must know the medicinal properties of those plants.

One of my favorites points of information when I give a tour of the conservatory is I love to stop and ask people if they have any chemistry backgrounds. I’m fascinated by alkaloids. You know what alkaloids are. Basically, a naturally synthesized pesticide. So if it affects an insect, it affects a human system as well.

Caffeine is one of my favorite alkaloids, and quinine. I tell the story of how gin and tonic (quinine) was invented. Being in the tropics, the British learned to take quinine to stave off the malaria that was rampant from the mosquitoes. When they colonized India, British would mix their quinine dose with a little bit of sugar and a little bit of water and a little bit of lime. All they needed was to add the gin and that’s how they created a gin and tonic. Fantastic. (Apparently, Christian is a kind of alkaloid guy) All I need is gin and tonic at night and coffee in the morning and I’m ready to go. 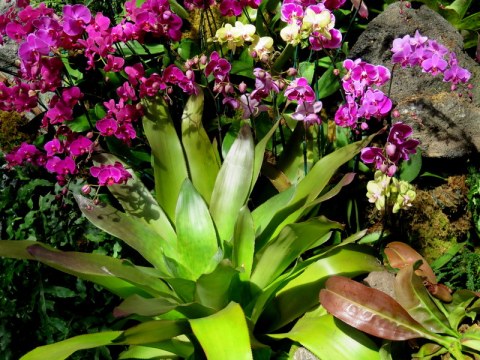 Yeah, I’m fascinated by the chemistry of plants. Of course rain forest plants are in such a competitive environment, that these plants, all these beautiful orchid plants that you see and delicious fruit that you see at the grocery store are a product of that competition. Competition for pollinators, competition for seed disseminators. Every day you learn something new and that’s what I like about all of this. You can never know it all. It’s like a road that doesn’t end. And I have people ahead of me on that road that teach me things. Then, I can teach those coming up behind me. I enjoy it. I’m not the biggest orchid fanatic but I certainly can appreciate what Marc knows and what Marc does. He’s an encyclopedia. I joke with these guys about Marc. You flick a switch and he just goes and you try to keep up. I learn something from him every time.

Where did you work before the NYBG?

I was the Conservatory Manager in Bolyston Mass, Tower Hill Botanical Garden. It is smaller than this. The shows we did were far smaller in scale. But don’t you know, that’s where I cut my teeth. I learned a lot from Marco Polo Stefano. He’s had an incredible career. He was at Wave Hill Botanical Garden. Fantastic man. Still lives right around here. He gave me so much encouragement and I learned so much there and he actually encouraged me to come here. And I did and I never looked back. And I love it.

You have to be a special person to love plants. Creative, unique a different sensibility.

Don’t you think, though, that many people can love plants? 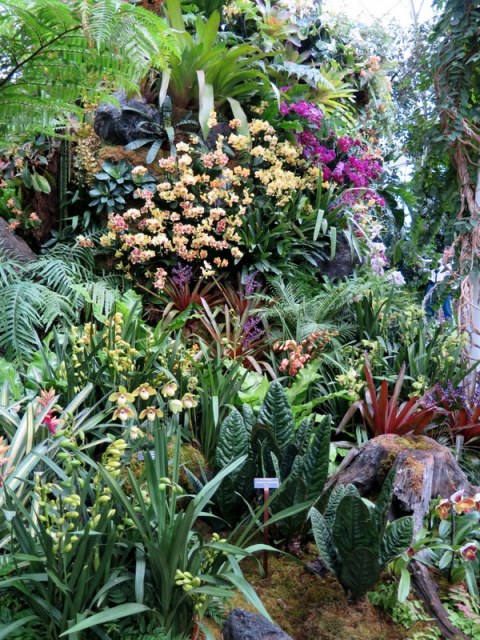 Yes. But what I mean is to have the sensibility and creativity to work here is great.

There is no where else I would rather be. 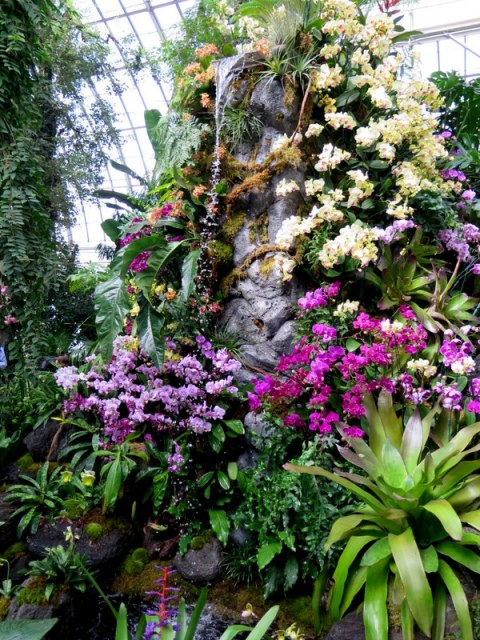 And I think part of this, too, when I was doing the show. You know the Dieffenbachia?

The Dieffenbachia is a Victorian plant that has been around for hundreds of years. It’s the kind of thing my grandmother grew or people who don’t grow plants, if they get something for their windowsill, usually a Dieffenbachia or something along those lines that is fairly standard. I wanted to incorporate those, but I wanted to give it a little bit of a twist to show people how far we’ve come. So I used those traditional Victorian plants but I used modern cultivars. So these Bromileads are just wild, crazy, the Aglaonemas, the Aechmeas, the crazy variegation and crazy colors. So there’s the thing that somebody can recognize and say, “Yes, I grow that.” But they also can see the potential. My hope is that I hook people. Whether you’re an expert like Marc or just a casual grower, I wanted to get somebody interested. What’s the saying, “You can’t please everyone all the time?” Well, I wanted to try.

I don’t know what orchids these are but I love them. NYBG Orchidelirium Photo: Carole Di Tosti

Well, I think you definitely did. It’s a magnificent show.

We shall see. (Christian Primeau smiles)

One side of the entrance to the mountain: Moth orchids and Cymbidium. The bright green plants in decoration with the brown plants are mosses. Photo by Carole Di Tosti

World Beat: Music and Dance Around the World of Orchids  Live performances from cultures around the world we be held on Saturdays and Sundays throughout the exhibition.